Is This Stolen Valor?

The video begins as most of them do, with the man in focus fumbling through descriptions of the medals and... 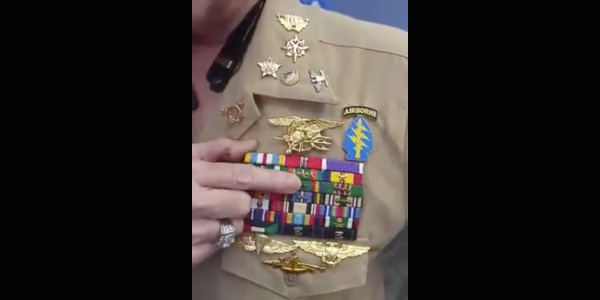 The video begins as most of them do, with the man in focus fumbling through descriptions of the medals and patches on his fake military uniform while a disembodied voice coaxes him on.

As the camera pans across the man’s chest, we see a SEAL trident, an Army Special Forces insignia, a Silver Star with a valor device, a Purple Heart medal, and countless other decorations. Together they appear to represent one of the most distinguished careers in military history.

“What SEAL team were you in?” the voice asks.

After some more back and forth, the voice, which belongs to a Florida man named Jonathan Borrero, delivers the punchline he knows the audience is waiting for: “Nobody’s ever come at you and said, ‘stolen valor,’ man?”

But the man doesn’t flinch.

Instead of backpedaling, the man, whose fake military name tag reads Colonel Douglas M. Reis, raises a salute and says, “When I see generals, generals even go to me like this, because I have more medals than they do.”

This is when it may begin to dawn on the viewer that Reis is completely oblivious to what’s going on. That he’s being made the subject of a video that will soon “make him famous” in one of the worst ways possible doesn’t appear to register at all. In fact, Reis seems to actually believe what everyone else can clearly see is untrue.

“I don’t know why I’m showing you all this,” he says. In the background, a woman in pink who at one point hands Reis his wallet looks silently on.

Borrero uploaded the video to his Facebook page on the evening of March 3 with an accompanying call to arms.

These days, uploading a stolen valor video to the internet is like throwing steak into a piranha tank. And given the hyperbolic nature of Borrero’s claim — that he had discovered “one of the worst cases of STOLEN VALOR ever” — this video was a filet mignon. Within 72 hours of being posted, it racked up nearly three million views.

Many commenters were quick to call for blood. “OMG, I am Speechless,” one person lamented. “This Asshole Should Be Throat Punched.” Another wrote, “Dude this guy needs to be dragged in an alley way and have his ass beat!!!”

But an overwhelming number of people, including many veterans, rushed to Reis’ defense, and the conversation gradually shifted from “Look at this civilian masquerading as a decorated war hero” to “Why on Earth would someone endanger this man by making him the subject of a stolen valor video?”

“This man is definitely not mentally competent and is in no way trying to gain anything more than a positive attitude,” one commenter wrote, echoing a sentiment expressed by countless others, many of whom drew comparisons between Reis and a young child in a superhero costume. “Stolen Valor is a Mentally Competent person lying about serving in the military to gain special treatment.”

On March 5, Borrero responded to his haters with the following post:

However, Borrero’s logic falls apart at once under scrutiny. Had he really wanted to notify someone who knew Reis, he needed look no further than the woman who was standing right by his side. But he didn’t. Instead, he mocked Reis on camera, posted the video on Facebook with the hashtag #StolenValor, and encouraged his friends and family to “SHARE!!!”

To accuse someone of stealing anything is to accuse them of a crime. But if justice was what Borrero was aiming for, he missed the mark. The chances of a law enforcement official watching this video and then tracking Reis down are slim to not a chance in hell. For starters, while it’s illegal to profit financially by lying about military service, simply wearing unearned military medals is not a crime, a federal appeals court ruled in January. That’s not to say it doesn’t have very real consequences.

In October 2015, a man was physically assaulted at a bar in Sacramento after someone accused him of carrying a fake military ID. Not surprisingly, the victim, who had actually served more than a decade in the Marine Corps and fought in Fallujah, told a local CBS affiliate that his attacker yelled, “Stolen valor!” before breaking his leg.

All of this serves to illustrate why stolen valor is such a dangerous game. To make that accusation is to play judge and jury without having the evidence to effectively to do so. And to then blast a video of the “trial” across the internet is to, in my opinion, accept responsibility for whatever happens to the person you’ve just condemned before an audience of millions.

Look, I understand why stolen valor pisses a lot of veterans off. We went to war. We got in firefights. We got blown up. We killed people. We lost friends. And then we came home and nobody actually gave much of a shit. But it shouldn't matter, because that experience is worth a lot more than a pat on the back. Guys like these, that's usually all they're getting when they fool people into thinking they served. A pat on the back. Maybe a free meal at Applebee's.

Let them have it. They probably need it more than us.