Why Civilians Don’t Relate To Veterans

Cultures clash. History is filled with conflicts based on things as simple as ideas, beliefs, and philosophy. It’s been happening... 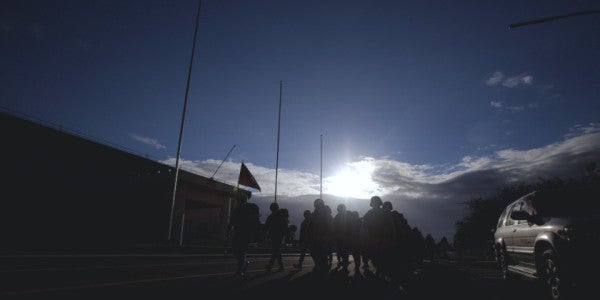 Cultures clash. History is filled with conflicts based on things as simple as ideas, beliefs, and philosophy. It’s been happening for a few thousand years, and it’s probably going to keep happening for a few thousand more. Somewhere closer to home there’s a constant struggle between veterans and civilians finding a common ground. As veterans, we expect to be understood, respected, and treated appropriately for the things we’ve grown to believe we are, and our status in society. There are civilians who are reaching out and want to fill that gap, and still we keep them at distance.

It’s part of our mental conditioning through our experiences that we just need to suck it up, shut up, and internalize just about everything. Opinions? Nope, lock those things up. Do you feel like this experience is difficult? Embrace the suck. We’re trained to keep our honesty and our thoughts to ourselves while checking off the calendar days until this field operation or deployment ends. We’re also taught to lock our personal struggles in a box and never speak of the box. Period.

A large part of the disconnect is cultivated on the basis of what we’ve experienced, and what others haven’t. I’ve heard Marines mutter the phrase, “I have a Combat Action Ribbon, so I have a permanent man card.” It eluded to the idea that people without one can’t be held in the same echelon as those who have.

“While serving in the armed forces” is a particularly important point in that statement. High school kids have fights, some bloody, and some traumatic, and then they’re punished for the behavior, rather than handed an award. Women who experience domestic violence have been on the receiving end of conflict, often left with emotional and physical scars. They aren’t given ribbons to remind them of the horrific events they survived. We feel these decorations are a dividing point between us and the civilians that we used to be and look at them as if they’re lesser beings for not being part of the club.

Military discipline is actually pretty well calculated to maximize motivation and effectiveness of troops. You either willingly adapt to the expectations or die. Lacking self motivation? A senior noncommissioned officer will gladly help you find some, either through intimidation or reprimand. Our civilian counterparts are rarely forced to be motivated; their entire lives are subject to their own will to aspire and work diligently toward achievements that will improve their pay, health, or quality of life.

Part of the divide is the fact that as service members, we were constantly forced to be the best we could be, and perhaps we’re jealous that civilians were left to do everything they wanted. They could perform as well or poorly as they felt like. Our self perception of being excellent is easily offended when things are unsatisfactory to our expectations, and we make it verbally known. While it’s not wrong to hold people to high standards, it creates friction with people who haven’t been conditioned to share our mindset.

The workplace evaluation and promotion system often seems subjective, even more so than the military. Every person who writes an evaluation has their own method of what to say about an employee and how to score their performance. Many things are not in the employee’s hands like physical fitness scores and uniform maintenance were in the service. This leads to frustrations that veterans aren’t being looked at in a way that is fair. There is only so much you can change here, while your attitude and how you approach co-workers or your evaluator are something you can modify, you cannot make everyone hold you in high regards, even if you’re making the greatest effort to succeed.

Many of the disconnects happen due to our perception of our worth, and where we think we stand in the ranks of civilian society, and a total lack of communication. Civilians tend to ask the wrong questions. Instead of using misdirection or a change of subject, veterans either create a tense and awkward moment by saying yes, or by shutting down on the topic. While veterans will wear their combat status with pride, it’s fairly common knowledge that war and the violent acts we performed are anything but glorious. It’s often riddled with guilt and gore, a very dark and dirty experience where there is no desire to rekindle the memory of what happened or how it was done.

Ultimately, as veterans, we want the public to get us and understand us, without sharing the facts that are needed to make a connection. We don’t extend ourselves to those who haven’t served or explain our habits and philosophies in a way civilians can understand. We don’t express the fact that we’re upset with their subpar performance because we know it can be done better, we just berate them. If we as veterans made it a deliberate point to explain the how and why we do things, the gap could be closed. Our expertise as leaders could be better utilized to drive the workforce to be even more excellent if we laid out expectations with a supporting reason. You can’t win every heart along the way, but you have to make a move in the right direction to help the majority see where we’re coming from.