This Viral Photo Of A Veteran Without A Coffin Sparked Outrage, But It Doesn’t Tell The Whole Story

Thousands of people took to social media over the weekend to express outrage over photos of a Vietnam War veteran... 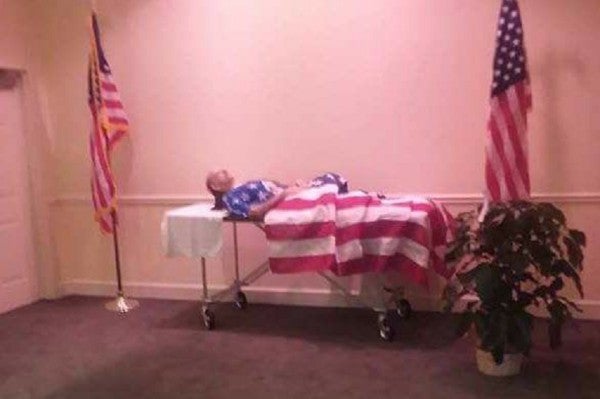 Thousands of people took to social media over the weekend to express outrage over photos of a Vietnam War veteran lying on a gurney without a coffin and with a flag draped over his body went viral on Facebook. But, as with most things on the internet, there's a side of the story that everyone missed.

Photos of 71-year-old George Taylor, a U.S. Army veteran who died May 8, began making the rounds on social media Friday along with the claim that the Heritage Funeral Home in Fort Oglethorpe, Georgia, refused to provide a coffin for Taylor until the family paid $9,000, which the family was purportedly unable to cover due to a life insurance issue.

“At first we were okay with it but like I told the guy, I said this was very disrespectful to my dad,” Taylor’s son James told a local ABC News affiliate. “They came to me and told me that unless than nine thousand dollars were paid, they couldn’t put him into the ground at the military thing, he would have to sit in the freezer until we paid it or the insurance come through.”

The outcry on social media began after a family member took a photo of Taylor, and sent it to someone else, who then posted it online. From there, it snowballed:

The photo has been shared more than 3,500 times, and while it’s generated a great deal of anger and an outpouring of support for Taylor’s family, the funeral home claims the viral photo is not what it seems.

Ben Friberg, the manager of the Fort Oglethorpe location, told Task & Purpose, that at the time of viewing, the Taylor family had yet to settle on a coffin, and at their request, Taylor was brought out wearing the clothes the family chose for him and draped in an American flag.

“In 50 years of serving this community, money has never once been the reason that our family has been unable to serve another family in their time of need,” Friberg said. “In this particular case we presented may different options to the Taylor family, but in this case, we did exactly what we were instructed to do by the immediate family members.”

Taylor’s relatives have also come to the funeral home’s defense. From Raw Story:

Beverly Roe, who said she was the sister-in-law of the deceased veteran, said that the family “shook on” the arrangement.

“His son was too. We shook on it. The three of us shook on it and then all of a sudden, somebody comes in and wants to stir up trouble,” she said. “These guys haven’t done anything. They were so nice.”

Taylor has since been put to rest at Chattanooga National Cemetery, where he was buried on May 12 — in a coffin.