Exclusive: Congress Is Quietly Trying To Pass A ‘GI Bill 3.0’ By Memorial Day

In the past few weeks, congressional staffers and advocates from some of the largest veterans service organizations have quietly begun... 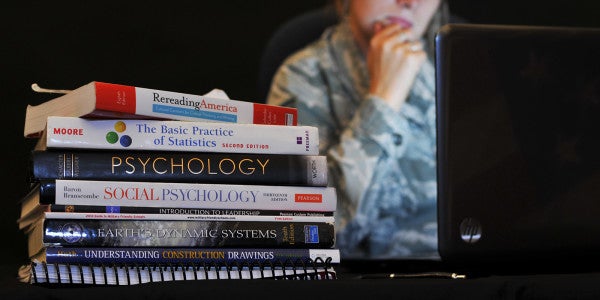 In the past few weeks, congressional staffers and advocates from some of the largest veterans service organizations have quietly begun work on “GI Bill 3.0,” a major revamp of service members’ educational benefits, with $3 billion in new spending planned over the next decade. But some veterans advocates say the plan would amount to a new tax on the lowest-paid service members, and they’re concerned that Congress is more interested in a photo op than in good policy.

“Charging incoming troops is absolutely a dealbreaker,” one D.C.-based veterans advocate with knowledge of the effort told Task & Purpose. “We’re not going to stand for them taxing troops for their benefits.”

In conversations with multiple sources in veterans service organizations and on Capitol Hill, Task & Purpose has learned that there’s a great appetite for closing up loopholes and antiquated practices in the Montgomery and Post-9/11 GI Bill programs — but also wariness over the potential cost to service members and the speed at which Congress wants to move.

Supporters, though, say the pace of action reflects a broad consensus across parties and ideologies that it’s time to lock in expanded educational benefits for more vets. “Congress is very supportive,” said Will Hubbard, vice president of government affairs for Student Veterans of America, a rising VSO that’s spearheading GI Bill 3.0. “How often does that happen, right?”

‘The hearing was announced when everyone was gone.’

Since March, the House Committee on Veterans Affairs has solicited input from veterans groups — but just a few of them — and quietly scheduled a subcommittee hearing on the GI Bill proposals for 10 am on April 26, even though that hearing has not yet been posted on the House calendar or the committee’s web page.

“The hearing was announced when everyone was gone,” a Democratic staffer for the House Committee on Veterans Affairs, who requested anonymity to speak about internal matters, told T&P.; “Our members aren’t here, they’re in their districts.” That means the congressional panel that will mark up the GI Bill won’t have much time to prepare for the process.

“It was hastily and quietly put together,” the staffer said, adding that the committee wants “to go fast, even though we all have questions.”

Sources say the Republican leadership is soliciting comments for the record from a variety of groups for the April 26 hearing, but the only invited speakers are from organizations expected to support a final revamped GI Bill.

“The idea of charging young service members rubs a lot of people the wrong way. The government is asking a lot more of them than just their service.”

One group that is noticeably absent from the speakers list is the Veterans of Foreign Wars, which favors an ambitious set of reforms but is wary of the additional cost to new service members. “While we would support many of the stand-alone improvements to the GI Bill, we will vocally oppose any new tax on service members to pay for benefits that should be earned through service,” said Ryan Gallucci, director of national veterans services for the VFW. “It's disgraceful that Congress would propose more fees for troops when we're still at war.”

The decision not to include the VFW on an issue like this “is being done by folks who I’m not sure are fully informed about the importance of working with major groups and memberships like these,” a representative of another vets’ group told Task & Purpose.

But “there’s really not a reason to delay on this,” said Hubbard of SVA, which has led the push for a GI Bill overhaul and is scheduled to give testimony at the April 26 hearing. “We’ve been having conversations with organizations about this since November,” he said — and those discussions were “reflective of nearly a decade of conversation” among vets groups about the GI Bill’s many shortcomings.

Still, Hubbard added, “We really want to get it as close to right on the front end as possible.”

Nevertheless, the House Veterans Affairs Committee “wants this passed the week leading into Memorial Day,” one veteran’s advocate with knowledge of the deliberations told Task & Purpose. “It'll give their members a ‘victory’ to take home for the holiday.”

Asked about that, the committee staffer said: “There’s always the goal to have a gift for veterans for Memorial Day.”

For most vets groups, improvements to benefits are long overdue. For example, the Obama administration fell through on a promise to expand caregiver benefits to Vietnam, Cold War, and Desert Storm-era veterans, advocates say. A veterans omnibus bill passed last year was meant to improve support services for vets, but was significantly cut down leading up to congressional vote after lawmakers failed to compromise on a number of controversial issues.

VSOs have also approved of or suggested a variety of GI Bill fixes, including:

For those proposals and more, there’s plenty of support among vets groups. But “closing loopholes costs money,” one representative of a major VSO said, and GI Bill 3.0’s funding mechanism is a stumbling block for many advocates. The current draft bill would double the optional GI Bill buy-in for new enlistees to $2,400, in $100-a-month increments, starting in 2018.

“The idea of charging young service members rubs a lot of people the wrong way,” the VSO representative said. “The government is asking a lot more of them than just their service.”

“The concern is, what happens down the line, when the sea of goodwill is no longer present. What do we do?”

In fact, that’s a big chunk of a junior enlisted service member’s base pay — and future vets are already paying out of their salaries for dependent health care and new “blended” retirement benefits. “You know E-1s make nothing,” one VSO representative told T&P;, “in addition to paying for Tricare and a 401(k).”

“If these changes are that important, Republicans should really find a way to pay for them, besides taking it out of the pockets of new service members,” the House committee staffer said.

Not all veterans groups agree that the new charge to GIs would be a bad thing, however. Student Veterans of America conducted extensive research into how veterans use their educational benefits, and believes that making service members pay into the program increases the likelihood that they’ll use it — and defend it against potential future cuts.

“For the amount that individuals would be paying in, this is a no-brainer,” SVA’s Hubbard said. “It’s actually lower, by inflation,” than the buy-in that Montgomery GI Bill recipients had to pay. “And it creates an offset to reinvest in the program” — $300 million a year, according to scoring of the bill. With the service member’s paycheck contribution, he said, “We can keep this around almost indefinitely.”

Despite the discomfort some VSOs feel toward the pay provision and the congressional calendar, few oppose GI Bill 3.0 at this point — they’re simply calling for more inclusion in the deliberations. “It’s all well-intended and we’re glad HVAC is addressing it,” a major VSO representative told T&P;, but “the way they came to it doesn’t work.”

That advocate, and others, said they would like more hearings and roundtables for members of Congress to hear from a variety of stakeholders. “The members need to be brought in” for far-ranging conversations, the Democratic House staffer said, “including with the House Armed Services Committee, think tanks, and VSOs.”

“We want to make sure discussions around this issue are responsible and held in a nonpartisan way,” one VSO rep told T&P.;

“The return on investment here is incredible.”

But advocates say there should be some urgency to codifying new benefits — and making it harder for a future Congress to roll back some of the Post-9/11 GI Bill’s expensive promises to service members. “The concern is, what happens down the line, when the sea of goodwill is no longer present,” SVA’s Hubbard said. “What do we do?”

The answer, he said, should be to convince lawmakers to “see that program continue not as an era-related benefit,” tied to this war or that, but as an inviolable contract with vets for all time: “The return on investment here is incredible.”

That should leave congressional leaders confident that a consensus on reform is possible, as long as the discussion is broad and deliberate.

“None of us wants a big fight to stand in the way of big changes” to the GI Bill, the Democratic staffer said. “Everybody talks about it as one of the greatest government programs.” So far, that consensus isn’t changing.