Iraq and Afghanistan Veterans of America, the grenade-lobbing, upstart among nationally influential veterans advocacy groups, is getting a new executive... 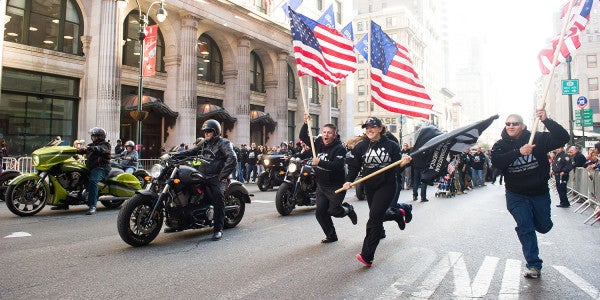 Iraq and Afghanistan Veterans of America, the grenade-lobbing, upstart among nationally influential veterans advocacy groups, is getting a new executive director, representatives of the nonprofit told Task & Purpose late Monday.

But Paul Rieckhoff — IAVA’s founder, CEO, and longtime public face — insists that the change is all about “the evolution of the organization” to win greater influence with policymakers and vets, not any reflection on the group’s controversial past. “I’m not going anywhere,” he told T&P.;

Allison Jaslow will be IAVA’s new executive director, the group confirmed yesterday in a press release Monday evening. Jaslow, a former Army captain and Iraq vet who has served a variety of Democratic causes — including a stint as former Virginia Sen. Jim Webb’s press secretary — joined IAVA in early 2016, quickly rising to be the group’s chief of staff and a familiar face among veterans advocates on Capitol Hill.

“Allison is one of the most important veteran leaders in America,” Rieckhoff said in the statement. “Over the last few years, she has quickly established herself as an unparallelled force for our movement.”

Task & Purpose approached IAVA to ask about a potential change in personnel Monday afternoon, when Rieckhoff’s profile disappeared from the group’s online listing of staffers. His profile was restored on that page sometime Tuesday morning.

Claire Owens, IAVA's press secretary, attributed the website shuffles to “an error that published Paul's bio” on the board of directors page, but not the staff listings. “We fixed the glitch,” she said, “but you'll notice his title is consistent.”

Founded by Rieckhoff in 2004, IAVA has grown into a considerable fundraising and campaigning resource for post-9/11, web-connected vets. But it has also courted criticism for its left-leaning political advocacy, aggressive media promotion, and Rieckhoff’s fiery leadership, which has sometimes put the group at loggerheads with more established veterans service organizations and their quiet consensus-building style.

Sources in those VSOs tell Task & Purpose they were especially rankled by Rieckhoff and IAVA’s successful campaign to kill GI Bill reform in Congress last year; those critics have expressed similar concerns about IAVA’s attacks on the proposed “GI Bill 3.0,” a compromise bill whose progress slowed after IAVA and others accused lawmakers of trying to ram through a $2,400 “tax” on service members to secure their educational benefits.

A more concerning issue for the organization was a cloud of suspicion gathering around Rieckhoff after the Daily Caller reported in February that IAVA had resorted to creative bookkeeping to keep grant funders happy. “This is not something that the staff is okay with and not something the staff would do on their own,” one former IAVA staffer told the Caller. “This is about a fundamental culture at IAVA that Paul has created.”

Rieckhoff has denied those claims in no uncertain terms. “It's unfortunate that these nameless sources have gone to such lengths to attempt to discredit me and undermine IAVA's critical mission,” he said in a February response to the Caller’s story.

Rieckhoff told T&P; that Jaslow’s elevation to executive director of the group was not about him taking a step back, but about leveraging her experience to take IAVA to the next level. “We’ve got a really great bench now” of talented public facing officers, particularly women, he said in a phone interview.

“I’m excited for her!” Rieckhoff added, noting that when it came to many of the group’s current campaigns — including #shewhobornethebattle, a campaign “to Fully Recognize and Improve Services for Women Veterans” — “she's a more talented spokesman than me.”