The Man Who Killed The Bill To Combat Veterans Suicide

It is doubtful that any single senator of the post-9/11 era has managed to piss off as many veterans as... 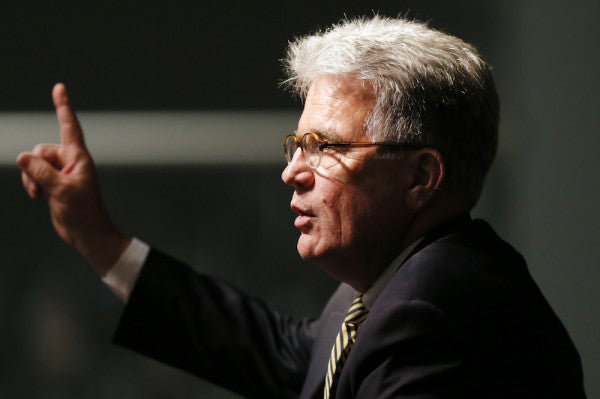 It is doubtful that any single senator of the post-9/11 era has managed to piss off as many veterans as Tom Coburn has over the last week.

The Republican Senator from Oklahoma, known as “Dr. No” by some of his colleagues for his opposition to federal spending, has likely derailed any chance of the Clay Hunt Suicide Prevention Act being passed this year, leaving it to be taken up by the next Congress.

The suicide prevention legislation, which has 21 bipartisan co-sponsors and has been advocated for by organizations ranging from Iraq and Afghanistan Veterans of America to the Department of Veterans Affairs, was blocked by Coburn during Monday’s Senate session. Coburn, who is retiring from the Senate, gave a defiant speech on the Senate floor explaining his stance.

He previously argued in a statement released last Friday that the bill is duplicative of tools that already exist, such as providing student loan relief to psychologists willing to work for the agency.

“Events, catastrophic events, depression, and situations lead people to suicide, not any one individual. They are searching for an answer we have failed to give,” Coburn said on the floor. “Until you hold the administration of the Veterans administration accountable, you will never change the attitude that our veterans are not getting the very best.”

He also criticized those who were lobbying for the bill’s passage, saying that his military legislative assistant had been harassed. “I have a military liaison who had significant injuries as he served this country. He got targeted by the veterans groups that wanted to pass the bill. Talk about dishonoring a veteran? You’re going after my MLA who served this country with distinction.”

On Friday, Dec. 12, IAVA CEO Paul Rieckhoff appealed on Twitter for people to call Jabari White, Coburn’s military legislative assistant, who is a veteran of the Iraq War.

Coburn was blasted by IAVA over the last week for his opposition to the bill, with the organization urging its members to flood the senator’s offices with phone calls and emails. But the notoriously stubborn senator refused to budge.

“With the suicide crisis continuing, it is unconscionable for a lone senator to block a fair vote and for Congress to leave Washington without dealing with this crisis,” Rieckhoff said in a press release after the bill failed.

Clay Hunt’s mother Susan Selke said, “I am grieving thinking of those young men and women who will be delayed receiving help because of this inaction.” “

Why would Coburn, as one of his last actions as senator, oppose a popular bill that carried a relatively paltry price tag of $22 million, which would be taken from existing VA funding? Considering how serious the suicide epidemic is among veterans, totaling 22 a day by some measurements, such petty opposition seems particularly galling among veterans and their advocates.

It is part of a long career trend for the senator, who has consistently voted against continuing resolutions to fund the government, and has a reputation for fiscal rectitude and opposition to even trivial spending that has frustrated many of his colleagues.

Coburn’s office has annually published a “Wastebook” detailing all the programs he believes the federal government misspends money on. His “Dr. No” nickname is a testament to his filibustering, targeting bills proposed by his own party as often as the opposition’s.

Despite his obvious relish in being the Senate’s gadfly, Coburn is respected by many of his colleagues as a principled lawmaker who votes out of conviction, even if those convictions are blocking bills championed by everyone.

Sen. Kelly Ayotte, a Republican from New Hampshire, who has argued for the passage of the bill, told Government Executive: “Tom has put more holds on legislation than anyone,” she said. “His concerns are always legitimate, and I have a lot of respect for him. … We're going to miss him here, so this is something that is not unusual for him and we all respect.”

However respected he might be by some, Coburn managed to inextricably tie his legacy with opposition to a bill overwhelming favored in both the House and the Senate, one that seeks to save the thousands of veterans who commit suicide each year.

While Coburn may not seek another public office, many veterans are not going to forget the stubbornness that could cost many more lives before the Clay Hunt Act finally gets passed under the 114th Congress.

From this veteran, specifically: Goodbye, Dr. No. Don't let the door hit you on the ass on the way out.