Saying ‘Thanks For Your Service’ Doesn’t Cut It Anymore

Wednesday is Veterans Day, and while the speeches will be many and while I will be marching proudly beside thousands... 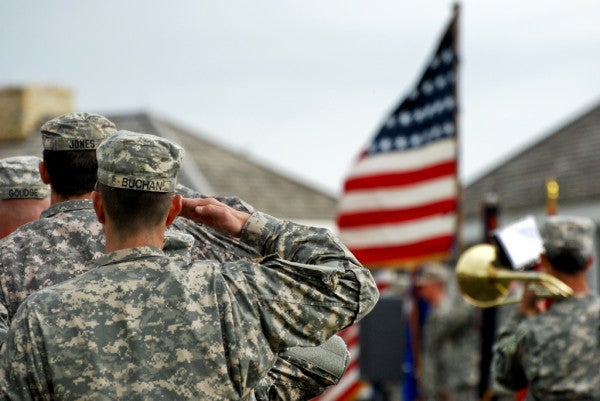 Wednesday is Veterans Day, and while the speeches will be many and while I will be marching proudly beside thousands of brothers and sisters in arms down Fifth Avenue in New York, I’m pretty tired of the annual “Thank you for your service” message. This expression of gratitude, while well intentioned, is empty without any substance behind it.

Our organization, Iraq and Afghanistan Veterans of America, represents 2.8 million of America’s war veterans. And while I don’t speak for every one of them, I can say as an Iraq War Army veteran I’m looking for the more than 297 million Americans who didn’t serve to show us some real support. Let’s move beyond words and help deliver tangible results that impact the lives of every veteran, every day of the year.

Since the wars in Afghanistan and Iraq kicked off in 2001 and 2003, millions of men and women across America have bravely raised their right hand as volunteers, answering their nation’s call to service. But if you were like me when you joined the military, you didn’t think about what would happen when you returned to the civilian world. You weren’t thinking about whether or not your military job skills would translate following your service, if you would experience trauma during your service and be in need of mental health counseling, or how you would relate to your friends and family members who didn’t serve.

These are just some of the issues our veterans face when transitioning from the military and attempting to develop a new “normal” in a country where only 1% of the population can relate to their experiences on the battlefield.

For the past 10 years, we at IAVA — growing to more than 425,000 members strong — have committed ourselves to a singular mission: “to connect, unite and empower post-9/11 veterans.” This mission isn’t only about guaranteeing our fellow veterans and our families the benefits and services they earned through service and sacrifice. It is also about ensuring all veterans feel welcome and understood when they come home and have a community they can connect with.

Part of that work requires closing the divide between military and civilians by sharing our values, experiences and culture with those who have not served in these most recent wars. And it is about creating ways that we can continue to serve our country.

Our friend Clay Hunt was a stellar example of an individual singularly focused on service. He took other veterans on mountain bike excursions, supported disaster relief with Team Rubicon, and participated in IAVA’s Storm the Hill grassroots advocacy initiative on Capitol Hill in 2010. But like too many of our fellow veterans, Clay had a burden that was too heavy for him to carry, and a year later he was lost to suicide.

We all mourned Clay, but we could find no better way to honor him and carry on his commitment to his fellow veterans than by aggressively advocating for a comprehensive veteran suicide prevention bill in Washington, D.C. IAVA made passing that bill — named in his memory — our top priority. Earlier this year, following an unprecedented bipartisan effort, Clay’s parents and I joined President Obama as he signed the Clay Hunt Suicide Prevention for American Veterans Act into law in February.

This historic bill will certainly save lives, and it shows America what Congress can achieve when we are united. The road was long — much longer than it should have been — but we thank everyone who looked past partisanship and politics to get it done.

But our fight has just begun. There is much more work ahead and the stakes have never been higher. The next few years will be the most important year for Iraq and Afghanistan veterans; almost three million of us have now served since Sept. 11; the VA scandal exposed an unprecedented betrayal; post-9/11 veteran unemployment is still too high; women veterans are too often treated as second-class vets; and too many in the public seem ready to close the book on the wars in Iraq and Afghanistan.

The landscape isn’t good. Congress remains divided and with a presidential election already in full swing, partisan politics will only get worse. Even so, support for our veterans can be the one issue that unites our country. Washington was able to put political bickering aside to pass the SAV Act. And we expect the same bipartisan collaboration to pass similarly comprehensive legislation tackling each of IAVA’s policy priorities we recently presented to every member of Congress and every presidential candidate looking to be our next commander-in-chief.

But the reintegration and success of the modern veteran cannot lay upon just the shoulders of veteran service organizations, the Veterans Administration or the federal government. The modern veteran also needs the support of local communities, the media, and corporations. In short, it will take all of us to empower the next generation of America’s veterans.

IAVA has seen the power a community of support has on veterans and their families and will continue to engage all parties to spread awareness and grow communities. Only through a joint effort can we continue to improve the lives of every veteran who raised their right hand in defense of our freedoms.