How Veterans Set The Precedent For America’s Greatest Protests

They arrived in groups, many of them arm in arm with the brothers they'd served with on the front lines... 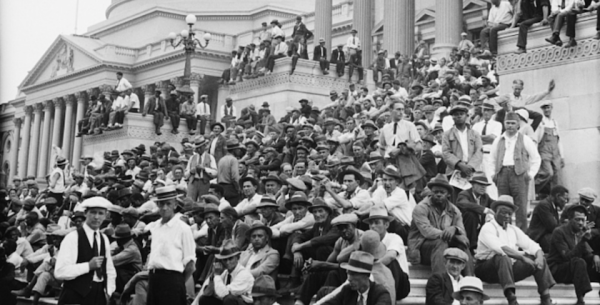 They arrived in groups, many of them arm in arm with the brothers they'd served with on the front lines across Europe. Many sported their uniforms and carried the gear that had saved their lives in wartime. Just as they'd done before, they were fighting for a righteous cause. This time, however, they weren’t marching against the Germans. They were marching on Washington, and the year was 1932.

It all started in 1924. The U.S. government promised veterans a bonus of $1.25 for every day of foreign service during the Great War, and a dollar for every day served stateside. The only caveat was that it would not be paid out until 1945. Young and filled with American pride, these veterans came home and set to work, content with the promise of their future bonuses. They put the war behind them, bought homes, had families, and worked right up until the stock market crash of 1929 ravaged the country.

Rendered jobless by the Great Depression, many of the GIs needed money: their bonuses.

An ad calls veterans of all races and ranks to join the march to Washington to demand payment of WWI bonuses.Photo via the Library of Congress

As the Depression deepened, protests around the country mounted. December 1931 saw a communist-led hunger march on Washington. And after the New Year, a Pittsburgh priest led 12,000 jobless people to Capitol Hill to petition for unemployment legislation. But the soldiers of World War I, deeming themselves the “Bonus Expeditionary Force,” stormed D.C. in an entirely unprecedented way.

In May 1932, former cannery worker Walter W. Walters had gathered up a band of unemployed veterans to demand early bonus payment. Well-organized, Walters instructed the men to behave, allowing “no panhandling, no drinking, no radicalism.” They set up a “Hooverville,” living in tents and vacant federal buildings and along the Anacostia Flats, southeast of the U.S. Capitol. In total, nearly 43,000 veterans and their families lobbied in Washington for an immediate cash payment that would have amounted to roughly $1,000 per veteran, or around $16,000 in today’s dollars.

These veterans became known as the Bonus Army.

The Bonus Army clashes with police in 1932.Photo via Wikimedia Commons

At one point, Marine Corps Gen. Smedley Butler addressed the marchers, saying, “I never saw such fine Americanism as is exhibited by you people. You have just as much right to have a lobby here as any steel corporation. Makes me so damn mad, a whole lot of people speak of you as tramps. By God, they didn't speak of you as tramps in 1917 and ’18.”

Ultimately, their protest led Wright Patman, a Democrat and representative from Texas, to sponsor a $2.4 billion World War I veterans bonus bill on June 16, 1932. The Senate, however, rejected it by a wide margin.

The Bonus Expeditionary Force camps out around the Capitol building into the evening hours in 1932.Photo via the Library of Congress

President Herbert Hoover thought that the rejection of the bill would force the veterans to pack up their shanties and go back home, but they chose to stay and continued to protest.

This prompted Hoover to mobilize the actual Army, under the direct command of Army Chief of Staff Gen. Douglas MacArthur to destroy the veterans’ camps, and although no firearms were used, a number of people were injured by cavalry.

Maj. George Patton’s command, in addition, began pushing the veterans out of Capitol Hill with Renault tanks. These were the same tanks used to fight the Germans during World War I. None of the GIs expected they’d were used against them at home.

The veterans then fled across the Anacostia River to their largest camp, and Hoover recalled the Army. MacArthur, however, ignored the president and continued on the offensive. Ultimately, 55 veterans were injured and 135 were arrested. A fire broke out and tore through the camp. No one knows whether it was the Army or the Bonus Army that set the shanties ablaze, but the destruction of the camp effectively ended the protest.

After the 1932 election, new President Franklin D. Roosevelt put the remnants of the Bonus Army to work building the Overseas Highway in the Florida Keys. Four years later, Congress approved early issuance of the veterans’ payments.

The Hooverville in Anacostia burns in the wake of the Army advancing on the protesters.Photo via Wikimedia Commons

Although many saw the Bonus Army’s protest as unsuccessful because it did not force immediate solution, it caused a national stir that brought prominence to veterans issues for the first time in American history and ultimately led to policy makers to sign the Servicemen's Readjustment Act of 1944, which ultimately become the GI Bill — now a mainstay among service member benefits.

Now, as thousands of citizens pour into the nation’s capital to protest President-elect Donald Trump’s inauguration, veterans, who led one the greatest protests in our American history after the first World War, are torn about where they to stand on modern-day social movements. Though some service members have been highly critical of the recent marches against the Trump administration, one group of veterans eagerly joined the protests at Standing Rock, using not only their military training but their moral authority to agitate for a cause they believe in.

Regardless of their contemporary political stances, veterans helped pioneer American protest movements during the 20th century, in a way that has benefited the various dissident and disenfranchised groups throughout history. By way of the Bonus Army, we all learned the power of protest in changing policy for the better.