Budget Spats Hurt Families Of The Fallen The Most

Whenever Congress and the White House play a game of chicken that results in a government shutdown, the losers are... 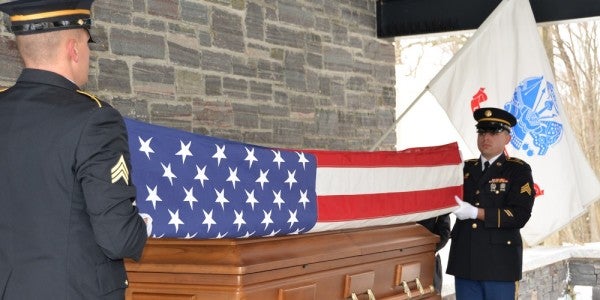 Whenever Congress and the White House play a game of chicken that results in a government shutdown, the losers are the families of U.S. troops killed in combat and training exercises.

Two U.S. soldiers were killed on Saturday when their AH-64 Apache helicopter crashed in California. Normally, each of their families would receive $100,000 death gratuities, but the fatal accident occurred during the government shut down.

“Under the government shutdown, DOD has no authority to pay death benefits to the families of these pilots or anyone else,” said Pentagon spokeswoman Dana White. “Congress needs to pass budget and support our troops and their families.”

Congress appeared close to passing a temporary spending measure on Monday that would reopen the government for a little while, but there is no guarantee that families of fallen and deceased troops won’t have to go through the same ordeal again if the government shuts down later this year.

“I think it’s time that we guaranteed that death benefits will be paid to these families, regardless of the circumstance,” said Ken Fisher, CEO of Fisher House, a nonprofit for veterans and families in need. “I think that maybe it’s time to enact legislation that guarantees that death benefits be paid, even in the event of a government shutdown.

“No family going through what these families are going through should ever have to wonder whether or not that’s going to happen.”

As of early Monday afternoon, Fisher House had offered to cover death gratuities until the government reopens and is waiting to hear back from the Defense Department, Fisher told Task & Purpose.

Due to privacy issues, the Defense Department did not allow Fisher House to pay the full $100,000 death gratuities to the affected families, said Fisher; he did not know if those issues have been rectified since.

Lawmakers have yet to come together to ensure death benefits be paid to families in the event of another shutdown.

Rep. Betty McCollum has introduced legislation that would prevent the interruption in death gratuities from recurring.

“My bill ensures that our military will get paid and that death benefits will be provided during this and any potential future government shutdown this fiscal year,” McCollum, a Minnesota Democrat, told Task & Purpose on Monday. “I hope that House Republicans will bring up this bill quickly and provide our service members and their families with certainty that they will be paid.”

“The military is not a political football,” Thornberry, a Texas Republican, said on Monday. “All around the world they risk their lives for us unconditionally. Our support for them should be unconditional, as well.”

Other groups are also ready to step in during government shutdowns. For bereaved families in need of immediate help, the Tragedy Assistance Program for Survivors offers 24/7 assistance, said Jen Harlow, TAPS director of casework support services.

“We are here to provide resources for the family, education on what benefits may be affected, support if someone is needing emergency assistance, and – because of the government shutdown – if their benefits aren’t readily available, then we’re able to fill that gap and connect resources for them,” Harlow told Task & Purpose on Monday.

For years, the nonprofit group has helped families of troops who have died in combat, training exercises and suicide. During the shutdown, TAPS will continue to provide families with travel and funeral assistance so they can have a proper service for their loved ones, Harlow said.

TAPS’ 24/7 helpline 1-800-959-8277 is available both to newly bereaved families who need assistance and those who lost a loved one before the shutdown and still need assistance, she said.

“We would recommend any families who have concerns or are very anxious about the government shutdown and how it will affect their benefits or commissary privileges to contact TAPS any time,” Harlow said. “We can walk them through their specific, unique benefits situation to determine how they are affected and the short-term, long-term plan.”