When Renee Swift, an Air Force officer, married an active-duty Navy pilot, the couple added to their already-challenging careers a... 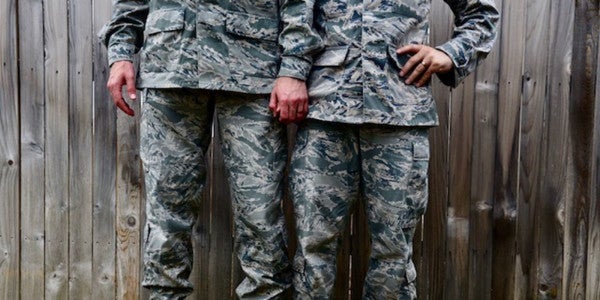 When Renee Swift, an Air Force officer, married an active-duty Navy pilot, the couple added to their already-challenging careers a third, seemingly full-time job: coordinating their advancements and deployments around the life and the home they shared. “In our marriage, we have lived apart longer than we have together, because of our military careers’ demands,” Swift says. The near-inevitability of physical separations in the military, through deployments or separate assignments, is so common that those who undertake it are called “geographic bachelors.” For all intents and purposes, they live as though they are unmarried and childless.

Even having children (or conceiving them) becomes a complicated logistical exercise when you and your spouse are both in the service. “I know many couples that planned having children around deployment windows or shore or school tours,” Swift says. She eventually transitioned from active duty to the Air Force Reserve, hoping the one-weekend-a-month, two-weeks-a-year obligation would simplify family life — and it has, but only up to a point.

In 2015, there were over 105,000 active-duty and reserve personnel in dual-military marriages. They've become increasingly commonplace.

“Now that I’m a reservist, it’s easier, yes,” she says. “But I still missed two out of three deployment returns due to military obligations.”

Many two-income families across America struggle to balance their work and family lives. But that struggle can be especially challenging for dual-military marriages: marriages in which both partners serve at the same time. In 2015, there were over 105,000 active-duty and reserve personnel in such relationships. They’ve become increasingly commonplace, reflecting a consistent trend of service coming from a smaller and smaller community of American families.

These dual-military marriages put in stark relief the personal and professional sacrifices often asked of America’s service members, and highlight the demands we make on military families. Many of the traditional support systems available to families are anathema to a military lifestyle. The military directly dictates where its members live, something most Americans would find hard to cope with in other careers. While the services make an effort to “co-locate” spouses, this often translates not to being stationed at the same military base, or anywhere near extended family and friends who can help, but to living on the same coast of the United States. In practice, co-located service members often still have to live apart or face a time-consuming commute. And good soldiers are expected to figure out home life for themselves.

Staff Sgt. Franklin MacDonald (right), a Sugarland, Texas, native and a paralegal, and Sgt. Tiffany MacDonald, an Amarillo, Texas, native and a combat medic, both with 2nd Brigade Combat Team (Advise and Assist), 1st Cavalry Division, raise their right arms and reaffirm their Oath of Enlistment during a dual re-enlistment ceremony at Camp Buehring, Kuwait, Nov. 7, 2011.

Challenges to advancement and retention

Navigating one’s own career in the military establishment is never easy, but figuring out your rights and duties in a two-servicemember family is especially hard. “It’s on dual-military couples to educate themselves,” one Coast Guard officer with an active-duty spouse says. While these couples do have a responsibility to understand their own commitment to the armed services, the military must also consider the broader issue of retention over the long-term, with consequences for not one but two trained and talented service members who may choose to leave the service due to strains on their family.

Married active-duty spouses who have achieved different ranks, serve in different professional specialties, or belong to different service branches, will be challenged when faced with opportunities that would advance their careers, but also require a period of separation from their families. Most of those affected accept it as an unavoidable aspect of the military personnel system, but piling these strains on families who have already faced multiple deployments is an unnecessary tension.

Even spouses who manage to find a way to be geographically co-located often do it at the expense of one’s, or both’s, career advancement. The farther you advance in a military career, the more frequently you’re expected to take an assignment or to leave the military, with little room for negotiation or remote work — common practices in non-military occupations. “Usually one person’s career suffers because the career advancement pyramids are very narrow, and it’s difficult for both members to meet their career wickets successfully and also live together traditionally,” says Swift.

Lt. Col. Hailey Clancy, of Mesa, Ariz., (left) and Maj. Michael Clancy, of the Bronx, N.Y., 2nd Brigade Combat Team, 1st Armored Division, Multi-National Division – Baghdad, share a laugh while flying to Camp Striker for a base recon, Aug. 8, 2008, during their deployment to Iraq with the Iron Brigade. The dual military couple has served two deployments to Iraq together.

Family life, or the lack thereof

For those military couples with kids, these challenges can become even more acute. Uniformed parents tackle the same difficult childcare decisions as civilian families, plus the possibility of deployment or child-rearing far away from extended family. The problems can start early. The Department of Defense, like many other U.S. workplaces, does not allow for extensive periods of paid maternity leave — 12 weeks, still about 12 weeks short of the recommendation of a recent policy brief — and paternity leave is restricted to 10 days. The discrepancy between paid leave for mothers and fathers risks placing more of the child-rearing burdens on the mother, while also potentially jeopardizing her career advancement and depriving fathers of time with their children early on.

While officers in dual-military marriages can likely afford daycare or a nanny, enlisted couples are apt to have a more difficult time affording these services. The nature of the military lifestyle often means there isn’t the built-in community network many families rely upon for extra childcare or support: There is no guarantee one will be stationed near a grandparent or family friend who is ready to step in as needed. Instead, a new social circle has to be built in each new location.

The military often assumes that if one spouse is deployed, the other can handle single-parenting.

Though the military provides childcare development centers (CDCs) — reasonably priced on-base daycare centers — certain service occupations, such as aviation, can be too haphazard for daycare to be practical. Flight schedules are posted with little notice, and can include late-night and early-morning time commitments. “CDCs are designed for 9-to-5 office hours,” one dual-military couple working in this field says. “Our struggle will be childcare for after-hours flights.” Though there has been an initiative to extend childcare hours in these centers, this move is a general extension of normal working hours.

The military often assumes that if one spouse is deployed, the other can handle single-parenting. This is a tall task in any military marriage, but it’s particularly tumultuous for a still-serving spouse thrust into the deployment single-parent role. Even if the military gives consideration to a homefront spouse to ensure they aren’t formally deployed, they may face their own training requirements or temporary duty assignments.

The military personnel system operates on the assumption that there will be a spouse at home — someone to host a coffee for other spouses, volunteer on-base, and provide emotional and physical support to the service member. This model has been eroding as more and more couples are dual-income. And this vision of family support is even less reasonable when both partners are serving in the military.

Reforms for better accommodating dual-military family life, such as opposing cuts to housing benefits, have been identified, but were unfortunately left on the cutting room floor with a suite of personnel reforms from the Obama administration. The services continue to ask a great deal of their dual-military couples. Current support mechanisms amount to inexpensive daycare, and advising couples to communicate often and foster realistic goals. The Pentagon is doing the “best they can for their members,” one naval officer says, but concedes that the attitude towards dual-military couples results in “burning people out faster, and making the readiness problem significantly worse.”

“Many times, what works well for the officer and their family is contrary to the wants of the military,” says Swift.

If the military wishes to align more of what its service members wish to get from the service with the service’s own needs, it must improve accommodations for dual-military couples who seek to develop careers and a family while serving their country.

Moira Fagan is a Consultant at the Center for a New American Security and the daughter of two Coast Guard officers.

Amy Schafer is an Adjunct Fellow at the Center for a New American Security.