Navy Families Are Getting Less Than 8 Weeks To PCS. Here’s Why

Following Permanent Change of Station orders can be one of the most challenging, stressful parts of life for any military... 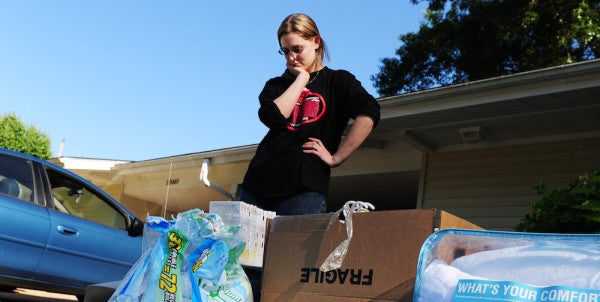 Following Permanent Change of Station orders can be one of the most challenging, stressful parts of life for any military family. But Navy personnel and their dependents this month got hit with a PCSing double whammy: The amount of time to shift their jobs, children, and possessions between duty stations is being reduced drastically — and no one can fully account for why.

“Sailors should continue to expect to receive permanent change of station (PCS) orders with approximately two months or less lead time through the end of the fiscal year,” the Navy announced May 22 in a press release, because “the service does not have sufficient funds” to give sailors longer PCS lead times. In past years, many sailors’ families had three to six months to plan moves — no small blessing for service members uprooting their lives from the United States to settle in Spain or Japan, say.

“We recognize the impact this has on Sailors and their families preparing to move, and we're working hard to remedy this situation,” Vice Adm. Robert Burke, the chief of naval operations, said in the release.

The service made its decision to shorten PCS lead times following the passage of the 2017 Consolidated Appropriations Act, a spending bill that funds the federal government through September. The law, which President Donald Trump signed May 5, allots $741 million to the Navy for PCS orders.

The Navy says that’s not nearly enough to cover its sailors’ moves. But members of Congress who voted for the budget say the service got exactly what it asked for.

Lt. Jessica Anderson, a spokeswoman for the chief of naval personnel, confirmed to Task & Purpose that the budget bill “fully funded the PCS line” of the Navy’s budget request, but that the service actually needed more to cover moving orders.

The reason the Navy didn’t ask for enough money, Anderson said, was to meet Congress’s longstanding budget restraints on government agencies after the 2011 Budget Control Act, commonly known as the “sequester bill.”

“That PCS budget request was adjusted in the review process to meet topline bipartisan Budget Control Act limitations, without regard for the number of moves Navy needs to execute,” Anderson said.

To get around hard limits on spending under the law, the DoD routinely submits a “request for additional appropriations,” with line items for all the services.

To cover its shortfall, the Navy asked for an additional $156 million for PCSing families, but that funding request never made it into the Consolidated Appropriations Act, Anderson said.

This additional funding would have covered 15,000 additional moves for sailors and their families, reducing gaps at sea in key operational billets. It also would have increased lead time for upcoming moves by two months, according to the request, “stabilizing the workforce and improving morale.”

That request for additional funds has not been taken up yet by Congress, but the Navy may not have even needed to make that request. In the main budget bill passed this month, the Army sought $1.81 billion for its base PCS budget — more than a billion dollars more than what the Navy requested — and Congress approved the full amount.

In the meantime, sailors’ families may be left scurrying to deal with movers, realtors, spouse employment, and school registrations.

Lt. Cmdr. Nate Christensen, head of public affairs for the chief of naval personnel, told Task & Purpose that two to three months has been the standard for years. But Kelly Hruska, a Navy spouse and legislative director for the National Military Family Association, told Task & Purpose “it was not unusual to get orders six months out,” adding, “you had a little bit of time to plan.”

Two-month notices have been issued in the past, but never to the vast extent they are now, Hruska said. What’s more, a number of Navy families associated with NMFA have been personally financially burdened by the PCS process.

“We’ve been hearing from families over the past few months that some were financing their moving plans themselves,” she said.

Hruska is worried that personnel-related funding problems like these may soon reach beyond the Navy.

“We’re concerned that the other services are going to follow suit,” she said.