Buck up, sailors: You’ve been accelerating your life as a global force for good in America’s Navy for a long... 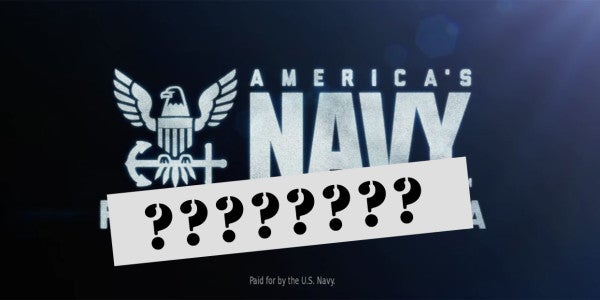 Buck up, sailors: You’ve been accelerating your life as a global force for good in America’s Navy for a long time now, and it’s time for a new sea-service slogan that works for you. That’s why we’re pleased to inform you that, after 18 months of intensive study and millions of dollars to outside consultants, you are now officially “Forged By The Sea.”

Yep, the Navy’s new marketing slogan, which the branch plans on rolling out in a shiny new ad campaign starting during this Saturday’s Army/Navy football game.

And gosh, is the new Navy slogan ever so neat. It’s already got its own website, with memes and videos and an infographic! And according to the Navy, it’s sure to perform well among the “centennials,” which apparently is a real word real advertisers are using now to describe the youngs.

“The Navy is now recruiting young men and women of the Centennial Generation, who have different goals, expectations and information-gathering habits than their Millennial predecessors,” Rear Adm. Pete Garvin, head of Navy Recruiting Command, said in a press release extolling the new “tagline” and “branding campaign” for the naval service. “As such, the Navy recognized the necessity to develop a new marketing campaign and media strategy that more effectively reach, educate and inspire the best-and-brightest prospective recruits.”

And just how much does that slick new media strategy cost that cost? Like a half a billion dollars — which sounds like a lot, but that’s barely one-fourth of the cost of a guided missile destroyer, and we’ve gone through a bunch of those already this year.

“If you just look here at our collage of numbers and words, everything will be explained.”

The “Forged By The Sea” plan came about in 2016 after the Navy “enlisted a marketing effort led by PR shop, Young & Rubicam,” according to Navy Times. Mind you, this wasn’t your typical enlistment contract, because you probably didn’t get offered $457 million for five years to help the Navy brand itself. But look what it bought: a sketchy-sounding strategy to net those potential “Centennial Generation” recruits!

Never mind that the Navy hasn’t missed its topline recruiting goals since Bill Clinton was president: We have to keep reinventing ourselves for the kids. “What we found was that there was nearly 100 percent awareness of the Navy, but zero percent understanding of the Navy's full mission, reach and influence,” a Y&R; managing director said in the Navy’s press release. And how do you inform the young people about what the Navy does? Just tell them: “Forged by the sea.” Done!

The best part of this budget-busting sloganeering effort is that it’s a totally original catchline that no one’s ever thought of — except for the well-received 2012 adult contemporary album “Forged By The Sea” and the Massachusetts jewelry company that trademarked “Forged by the sea” last year. (The Navy applied last week for its own trademark, to use “Forged by the sea” on “Puzzles; Toy airplanes; Toy boats; Scale model airplanes,” according to the Patent Office filing.) And it sounds nothing like the Navy’s 1992 strategy, “…From the Sea,” or its 1994 sequel, “Forward… From the Sea.”

Of course, those salty sea dogs who’ve already donned blueberries (or, my God, dungarees) know that there are already plenty of things in the Navy that get “forged by the sea” — like your personnel qualification standards; your eval-time brag sheet; the watch bill; your PCS orders; and the MSDS for that unidentified puddle of chemicals on the deck in your workspace.

Anyway, I could have saved America’s Navy a whole lot of money on that marketing contract. Just steal a page from the Italian sea service, dude: