The Army National Guard is looking to reform its training practices to create more career opportunities and shorter deployments for... 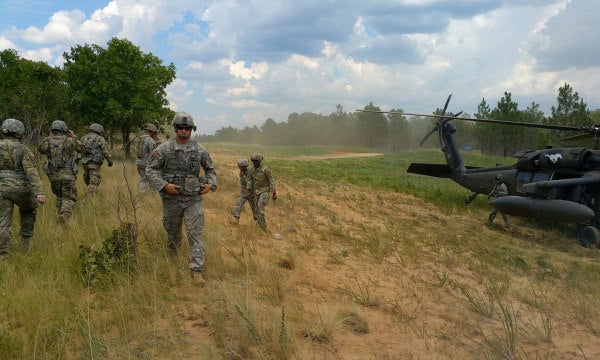 Though members of the Guard will continue to serve 39 days a year — one weekend each month and a 15-day training exercise — officials now plan on stressing more flexibility and specialized training, Kadavy told Task & Purpose in an exclusive interview.

The Guard, Kadavy said, is looking to move away from the way it has been training and deploying soldiers to both Afghanistan and Iraq since Sept.11, 2001.

Brigade combat teams specifically will get more rotations to the combat training centers at Fort Irwin and Fort Polk, which means Guardsmen will go from no rotation a couple years ago to four trips to the national training center annually, beginning in 2018.

“[When] 9/11 happened, we went to a partial mobilization authority where over 500,000 Army Guardsmen deployed over the last 15 years and in large numbers,” Kadavy told Task & Purpose. “We were mobilizing and deploying up to 50 or 60,000 at the top of the surge. But that was all based on the same predictable rotational process.”

Now, officials are trying to reshape the Army National Guard into a force for the future. Though the 2018 budget request seeks to add 7,000 new Guardsmen to the force, the primary focus will be shifted away from high-intensity rotational deployments in the Middle East to more specialized deployments — sending only units with mission-specific skills to carry out operations. As a result, he believes soldiers will benefit in the form of more flexibility.

“We are looking at rolling out a new initiative that focuses unit and soldier training tailored to the kind of unit and when and where they will deploy,” Kadavy added. “This is exciting for a lot of reasons: better opportunity for professional development, training with the active component at top tier events like National Training Center Rotations, and shorter deployments in the future.”

Depending on which unit Guardsmen choose and their deployment cycle, however, the new system could require an increased training commitment and more time away from work, school, and family. But the hope is that increased flexibility will serve as enough of a concession — and that certain units will see the benefits from spending more time in specialized training.

“They’ll have the ability to make decisions, like if a soldier has to go to school, or a soldier has a personal event in their life that they have, or an event or conflict with training,” Kadavy said. “We have the capacity to support soldiers in those areas.”

The Army National Guard, which has a projected end strength of 343,000 soldiers per the fiscal year 2017 budget, is the largest of all service reserve forces. Its top line budget, enacted May 5, 2017, is $15.6 billion.

“As we looked at where the Army National Guard needed to go in the future, Gen. [Mark Milley, Army Chief of Staff] asked a us a question, ‘Do we have the right National Guard for the 21st century that will meet the requirements and demands of the nation?’” Kadavy said.

Though Kadavy is proud of the accomplishments of the men and women under his command after more than a decade of war, the answer to Milley’s question is no, not yet. But with this new plan, which Kadavy calls “Army National Guard 4.0,” he believes it will get there.

“We had to take some good hard looks at what we would have to do if we received a demand to mobilize units quickly to a contingency anywhere around the world, say in 15, 20, 30, or 60 days and what type of readiness would we use if we had to achieve that,” Kadavy said. “That’s different than what we were doing over the last 15 years of war.”