Hurricane Harvey slammed Texas this weekend, dumping more than 20 inches of rain in some areas, collapsing parts of buildings,... 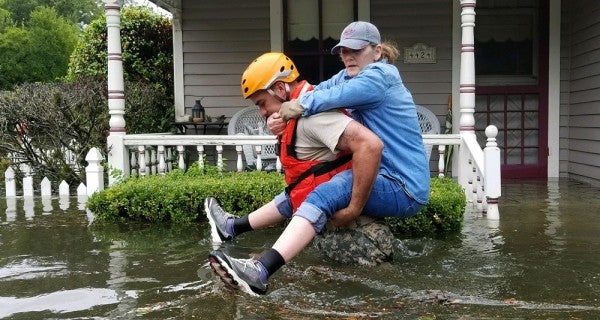 Hurricane Harvey slammed Texas this weekend, dumping more than 20 inches of rain in some areas, collapsing parts of buildings, and turning streets into raging rivers, and it shows no signs of letting up, reports the New York Times.

Rains are expected to continue for an additional two or three days, dumping as much as 15 to 25 more inches of water over parts of Southeast Texas, with some areas expected to get as much as 50 inches of rainfall.

Initially Texas Gov. Greg Abbott mobilized 900 members of the state’s National Guard on Aug. 25, but just two days later, the number had skyrocketed to 3,000, NBC News reports. An additional 500 vehicles, 14 aircraft and 6 shelters have also been called into service. The additional guardsmen and military personnel are stationed from Houston to Corpus Christi — where Harvey initially made landfall — and all areas in between and along the Gulf Coast.

Since the hurricane hit, members of the National Guard, Coast Guard, first responders, and volunteers have been working around the clock to assist those stranded and trapped in the wake of the flood.

“This is what we train for,” Army Brig. Gen. Patrick M. Hamilton, commander of the Domestic Operations Task Force, said in a Department of Defense statement. “And we're proud to stand beside our civilian partners, first responders and volunteers to serve the citizens of Texas.”

Texas National Guardsmen work with emergency responders to evacuate a resident on a stretcher in the aftermath of Hurricane Harvey flooding, near Victoria, Texas, on Aug. 27, 2017.U.S. Army photo by Capt. Martha Nigrelle

Harvey — the first hurricane to make direct landfall on Texas since Hurricane Ike in 2008 — is a Category 4 hurricane with 130 mile-per-hour winds and was declared a major disaster by FEMA on Aug. 25. At least six people have died in the wake of the flooding, according to Slate.

The “unprecedented” hurricane was made worse by warm water in the Gulf of Mexico and a lack of winds that might have steered it away from the coast, the Times reports.

“A two- or three-foot storm surge alone would not have been catastrophic,” Hal Needham, a storm-surge expert and the founder of Marine Weather & Climate, told the Times. “It was all these ingredients coming together.”

A Texas National Guardsman shakes hands with a resident after assisting his family during Hurricane Harvey flooding in Houston, Texas.U.S. Army photo by Lt. Zachary West