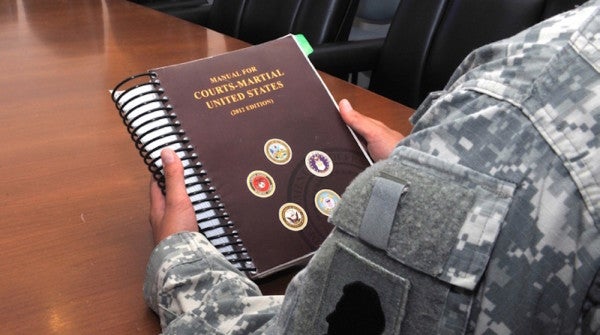 On June 15, the Wisconsin state court of appeals upheld a ruling affirming that former Wisconsin Army National Guardsman Jesse Riemer, was adequately punished by the military for soliciting sex from new recruits with a dishonorable discharge, the Associated Press reports.

According to court documents, Riemer allegedly used his position as a military recruiter “to engage in wrongful conduct with recruits and enlisted members of the [Wisconsin Army National Guard].” Military Judge David Klauser sentenced him to 30 days confinement and a dishonorable discharge

At the time of the offenses, Riemer was working as a recruiter for the Wisconsin Army National Guard and therefore subject to the Wisconsin Code of Military Justice described in chapter 322 of the Wisconsin Statutes. Under Wisconsin law, all court-martial appeals fall under the purview of the state court.

“Your conduct outlined in these proceedings, which you've admitted to and accepted responsibility for, is a criminal military offense,” Klauser wrote in his decision. “By my count, there are at least six service members that you have adversely impacted by your actions, and they should have been protected against your actions, which were inappropriate and predatory in nature.”

Riimer had hoped that Wisconsin’s 4th District Court of Appeals would overturn the charge by arguing that it was unduly harsh. However, the court chose to uphold the court-martial ruling, the first time a state appellate court has weighed in on a court-martial decision.

Task & Purpose reached out to Protect Our Defenders, an organization that works to ensure that survivors of rape and sexual assault in the military receive justice for comment on the issue. “My initial reaction is this how a real appellate court handles a criminal appeal,” former Air Force Col. and president of Protect Our Defenders Don Christensen said. “Our overly paternalistic military courts would have gone into fits if one of our trial judge had made the reasonable and expected remarks this judge made when sentencing the accused. This is what common sense justice looks like rather than the active duty forces hyper technical process that strips reality from the actual sentencing process. This is what happens when you have real courts administering real justice.”

And the state court was swift to deny Riemer's appeal.