A Royal Marines sergeant convicted of murdering a grievously wounded Taliban fighter at point-blank range in Afghanistan’s Helmand Province has... 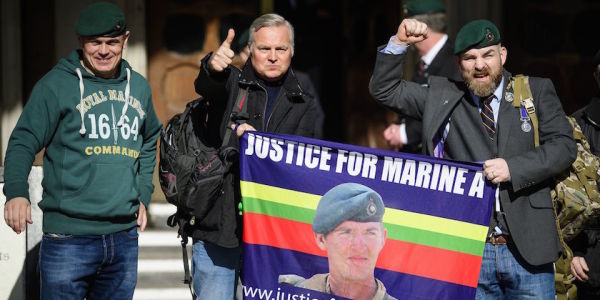 A Royal Marines sergeant convicted of murdering a grievously wounded Taliban fighter at point-blank range in Afghanistan’s Helmand Province has won an appeal on the grounds that he was mentally unbalanced during the 2011 killing, The Guardian reports.

Five judges of the Court Martial Appeal Court in London replaced Sgt. Alexander Blackman’s murder conviction with manslaughter on March 15, after concluding that the 42-year-old Marine’s “ability to form a rational judgement” was significantly impaired by the stress he was under the day he placed the barrel of his rifle to the chest of an injured insurgent and pulled the trigger.

“[It was] clear that a consequence was that he had developed a hatred for the Taliban and a desire for revenge,” the judges said. They also concluded that at the time of the killing “the patrol remained under threat from other insurgents.”

Related: Why I think Lt. Clint Lorance Is a Murderer >>

Blackman has been serving a life sentence in civilian prison since 2013. He will remain in prison until he is re-sentenced in the next few weeks. Because he’s already served more than three years behind bars, The Guardian reports, there’s a chance he could be released.

It was never disputed that Blackman killed the wounded Taliban fighter in September 2011, while on patrol near the outpost he commanded in Helmand. An inquiry began in 2012 after helmet camera footage of the incident was discovered by military investigators. The camera, worn by another marine, captured Blackman making the decision to shoot the armed insurgent after the Apache helicopter that had wounded him flew away.

Once the Apache was gone, the wounded insurgent was dragged to the edge of a field and taunted before Blackman killed him. But what was perhaps most disturbing about the video — and what earned Blackman headlines worldwide — were the sergeant’s comments after he pulled the trigger and the insurgent’s body lay twitching at his feet.

“There you are, shuffle off this mortal coil, you cunt,” Blackman is heard saying in extracts from the video that the court released (footage of the killing was not made public). “It’s nothing you wouldn’t do to us.” Then, addressing the other marines present, he added: “Obviously this doesn’t go anywhere, fellas. I’ve just broken the Geneva Convention.”

Blackman has described his six-month deployment to Helmand, which began in March 2011, as a “tour of hell.” By September, the Marines had suffered a number of casualties as they operated out of a tiny roofless compound with little oversight. At one point, a marine’s leg was blown off by an IED, and the unit later found his limb hanging from a tree — evidently placed there by the Taliban. Blackman and his men said they believed that if they were captured by insurgents they’d be skinned alive or beheaded.

The court’s decision marks a major victory for Blackman’s many supporters, who have maintained that Blackman was a brave and honorable Marine who snapped as a result of combat stress — an assessment the judges now seem to agree with. Prince Harry, an Afghan War veteran who served in Helmand and now advocates for British service members and vets suffering from post-traumatic stress disorder, reportedly called Blackman’s murder conviction “ludicrous.”

Among those fighting for Blackman’s release from prison were readers of the British tabloid newspaper Daily Mail, which launched a “campaign for justice” for Blackman that raised nearly a million dollars in donations that went to a legal fund.

“[The decision] much better reflected the circumstances that my husband found himself in during that terrible tour of Afghanistan,” she said. She also thanked the “tens of thousands of supporters, especially from the Royal Marine family, who have stood behind us throughout and played such an important role in getting us to this point.