As The Taliban Retakes Sangin In Afghanistan, Veterans Remember Its Dark Legacy

A resurgent Taliban force has taken control of Sangin in Afghanistan's Helmand Province, bringing denials from the country's fledgling government... 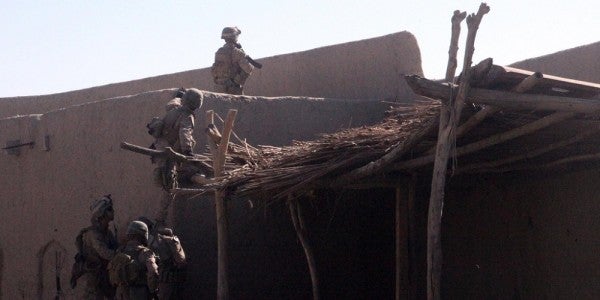 A resurgent Taliban force has taken control of Sangin in Afghanistan's Helmand Province, bringing denials from the country's fledgling government and bad memories for Marines who fought and bled to make the district safe.

News of Sangin's fall came came March 23, local and military officials confirmed to The New York Times, even as the central government in Kabul denied reports of the Taliban's success. Afghan troops pulled back from Sangin’s main garrison after insurgent fighters surrounded and captured the city overnight, the BBC reported.

Home to swaths of farmland and buttressed by slowly rising light brown mountains, Sangin is beautiful, but its reputation is ugly. The district claimed the lives of more American Marines and British service members than any of the country’s 400 other districts during the war, according to The New York Times. Since the U.S.-led coalition handed control of Sangin to Afghanistan’s military in 2013, hundreds of Afghan soldiers and police officers have also been killed defending the district.

For veterans of the 1st Battalion, 6th Marines — one of many Marine units that would rotate through Sangin during the war — the news dredged up a range of emotions. Sangin’s fall to the Taliban brought a mix of frustration, disdain, and sadness to the Americans who walked its dusty, dangerous roads.

“I fought in Fallujah and I fought in Ramadi as well, and it’s the same kind of low blow. Out of the three, [Sangin] was by far my bloodiest,” said Chris Cravens, who served as a Marine platoon sergeant with Bravo Company, 1/6, during their deployment to the district. “Every step down was a minefield. It wasn’t just bullets and mortars. You’ve got guys literally fighting for every inch of turf.”

But for a few, the loss of Sangin seemed like a forgone conclusion.

“It doesn’t surprise me,” Brandon Baia, a former Marine infantryman with Bravo Company, 1/6 told Task & Purpose. The reason, he said, was the attitude of the Afghan security forces he’d worked with in Sangin: “Their ‘give a shit level’ wasn’t very high. It seemed like they were there for a paycheck, and not to actually fight for their own country.

“We spent God knows how much money training these people and providing them with weapons,” Baia said, “and through two tours encountering [Afghan security forces], I encountered about five guys who were there to fight, wanted to fight, and cared about their country the way we do when we go and fight for it.”

Baia spent the early part of his deployment patrolling out of Forward Operating Base Nolay in Sangin. His first days there were marked by sporadic firefights and abrupt ambushes, then the Taliban moved to employing IEDs.

The IED pressure plates there, and in much of Helmand, were crafted out of wood and initiated with carbon rods from car batteries to evade the Marines’ metal detectors. Insurgents would bury a bundle or jug of homemade explosives nearby and wait for one unlucky step. “When you get to Sangin, everything is foot paths and you’re walking across open fields,” Baia said. “The IED threat was there. That was pretty much the only thing we had to worry about: Am I going to lose a couple legs or not?”

Sangin’s military value, then and now, lies in its location. A hub for the opium trade — a principal source of funding for the Taliban — the district is situated between the Helmand River valley and Kandahar Province, which means whoever controls it can easily travel between two key provinces. That’s why the U.S. deployed units to the district constantly, and why it continued to be a battleground after the American military withdrew in 2014.

In 2009, the district was under the purview of the British Royal Marines, who suffered 106 deaths there — accounting for nearly a quarter of all combat fatalities in Afghanistan that year. When U.S. Marines deployed to replace them, 20 were killed in the first three months, according to The New York Times; another 200 were wounded. The 3rd Battalion, 5th Marine Regiment deployed to Sangin in 2010 and suffered the heaviest losses of any battalion in the war.

In recent months, Gen. John W. Nicholson, commander in Afghanistan and prominent lawmakers on Capitol Hill have said the U.S. needs to send more troops back to Afghanistan to end the stalemate there. The Marine Corps is already deploying 300 service members to support the fight in Helmand.

But despite what they already gave in Sangin, some vets are skeptical that more U.S. action in the district will help its residents. “I can’t say I’m super depressed about” Sangin’s fall, Miles Lagoze, a former Marine videographer and Purple Heart recipient who served in Sangin while attached to 1/6, told Task & Purpose. “When we were there people were suffering a lot more, because bombs were being dropped and everything.

“The people there, they depend on the Taliban for a lot of things, because the government doesn’t do jackshit for them,” he added. “People will say ‘oh Afghanistan’s going to shit now that we left,’ but when we were there it was shit, because there was a war going on.