The U.S. military is giving the Afghan Air Force some much needed support: 159 Black Hawk helicopters to replace its... 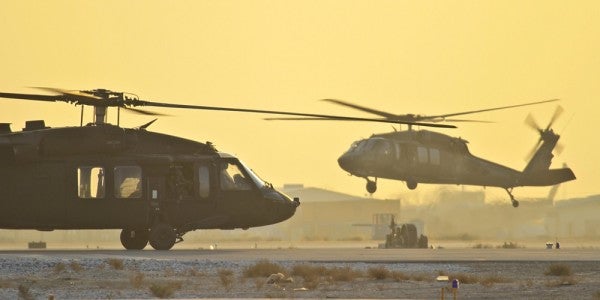 The U.S. military is giving the Afghan Air Force some much needed support: 159 Black Hawk helicopters to replace its aging fleet of Russian Mi-17 transport helicopters, according to Military Times. The first delivery, expected in 2019, is part of Afghanistan’s plan to double the size of its special forces and strengthen its air force.

The hope is that the newly acquired UH-60 Black Hawks will help the Afghan military break its current stalemate with the Taliban — which controls large swathes of the country — by providing much needed mobility and leverage for security forces. The plan has been in the works since 2016, and there are concerns that it may not come to fruition in time to be of significant help.

Related: As The Taliban Retakes Sangin In Afghanistan, Veterans Remember Its Dark Legacy »

“We are in the midst of an insurgency where the enemy is getting tacit support from neighboring countries,” Ahmad Shah Katawazai, a defense liaison and security expert at the Afghan embassy in Washington, told Military Times. “Our security forces are under immense pressure as they are fighting each day, on several fronts, with more than 20 terrorist organizations.”

The new helos will nearly double the Afghan military’s current fleet of 78-Mi17s, but there are concerns that the 159 new aircraft will burden the local forces’ already-undermanned maintenance staff.

“Given that it takes substantial U.S. support to maintain the airframes that the Afghan Air Force has already, it doesn't seem feasible that they would be able to support that many Black Hawks without a significant contribution from NATO,” Dr. Matthew Archibald, an independent researcher and consultant on South Asian issues, told Military Times.

The Afghan military — like the U.S.-led coalition — has leaned heavily on airpower for troop transport and offensive operations. The latest estimates from the the special inspector general for Afghanistan reconstruction show that roughly 18 of the Afghan Air Force’s Mi-17s are currently unusable — though the report notes that most of the issues with the old Russian helos are due to overuse.

In addition to the Black Hawks, Afghanistan will be getting a few fixed-wing aircraft — six A-29 fixed wing close attack aircraft and five armed AC-208s — as well as 30 MD-530 Cayuse Warrior ground attack helicopters.