I remember the exact moment I became convinced that Afghanistan was hopeless. I was an Army platoon medic deployed to... 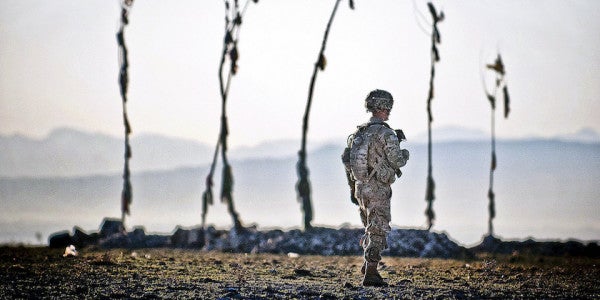 I remember the exact moment I became convinced that Afghanistan was hopeless. I was an Army platoon medic deployed to a remote outpost in Kandahar, and there was a screaming toddler laid out on a stretcher before me. He had a deep gash across his forehead — the result of a fall, his father said — and, in the spirit of winning hearts and minds, it was my job to stitch him up. But the kid wouldn’t let me. We tried everything: candy, juice, a stuffed animal. The Afghan soldiers even took turns singing to him. Each attempt was met with only more screams and a flurry of little fists. The fear in his eyes when I tried to touch him made me acutely aware of my foreignness.

Then the Afghan commander, a swaggering young lieutenant whom I once saw nearly pistol-whip a suspected insurgent to death, strolled into the aid station, which we’d built out of plywood and mosquito netting. I cringed when he unholstered his pistol, but then, in one smooth motion, he dropped the magazine, ejected the round from the chamber, and handed the pistol to the kid. The screaming stopped. And so did the tears. Even when I pressed gauze to the wound he kept a straight face. His whimpering was barely audible when the suture pierced the skin.

Later, the lieutenant told me, “The kids in Kandahar aren’t like the kids where you’re from. Here, they like to fight.” I was the bad guy. The gun was protection.

That was in 2010, nine years after President George W. Bush declared war on al Qaeda and the Taliban regime, and six years before Staff Sgt. Adam Thomas, a 31-year-old Army Green Beret, was killed by an improvised explosive device in Nangarhar province to become the 2,385th and most recent U.S. fatality suffered in the Afghan War.

In case you didn’t get the memo, the war is no longer called Operation Enduring Freedom; it’s Operation Freedom’s Sentinel. They’re the exact same conflict, except one — and I’ll let you guess which — entails fewer American soldiers, more Afghan casualties, a Taliban stronger and more influential than it’s been since 2001, and a few thousand Islamic State fighters thrown into the mix.

I’m cynical because I was there — because even to a young enlisted soldier with a very limited view of the war, it was painfully obvious that Afghanistan was, and will forever be, a lost cause.

There are three possible outcomes in every fight: victory, defeat, and surrender. The opportunity to achieve the first option has come and gone. Whatever gains we made in that direction have been reversed. The Taliban now either controls or contests about 50% of the country, including many of the places where American and NATO soldiers fought and died. As for defeat, how can we lose a war that’s being fought (or was fought, because, technically, the combat mission ended in 2014) in a country that the majority of Americans can’t point to on a map? If the president went on television and announced that we’d just lost the war in Afghanistan, America’s response would be the national equivalent of a shoulder shrug. Defeat is only possible when you have something to lose. That leaves us with surrender: Pummel the insurgency just enough to convince it that it must negotiate with the West for its survival. However, this approach assumes that, for the insurgency, diplomacy is an option. I’ll go out on a limb here and say that, if it were ever open, that window has also closed.

“You can’t export democracy” was a popular catchphrase among those who opposed military intervention in Iraq and Afghanistan back in the early days of those wars, when people were still paying attention. I don’t know if democracy can, in fact, be exported, but I do know this: It can’t be done with the promise of a more stable and prosperous society in one hand and a gun in another. Soldiers, no matter how well-versed they are in counterinsurgency doctrine, don’t make good diplomats. The moment an IED goes off, or a firefight erupts, the soldier’s primary concern becomes survival. The fact that the insurgents are shooting at you from a village where your platoon has spent months trying to forge a healthy and lasting relationship with the locals is irrelevant — you retaliate with bullets, mortars, airstrikes, and whatever else is necessary to make the shooting stop. If just one civilian is killed or wounded in the crossfire, that’s enough to unravel a years-long “hearts and minds” campaign and further calcify the us-versus-them mentality that makes peace impossible.

Which brings me back to the kid. At 2 years old, he already understood the value of a gun. It was the only thing that brought him comfort in that moment of intense fear, which he’d certainly felt before as a resident of the district my unit patrolled. 2010 was the year of Obama’s troop surge: The year we were supposed to turn the war in Afghanistan around. But we did the opposite. Instead of alleviating that fear, we nurtured it with blood. With every raid and large-scale offensive, we gave the locals more reason to be afraid of us and the world we represented. To think that we can convince the people of Kandahar, Helmand, Kunar, and the other rural provinces to lay down their arms and wait for the seeds of democracy to grow in such an environment is arrogant beyond comprehension. Because for them, too, survival is the primary concern, and for them, too, it can only be protected with a gun.