In the fall of 2016, while writer Elliot Ackerman was on assignment in Iraq for Esquire magazine, he found himself... 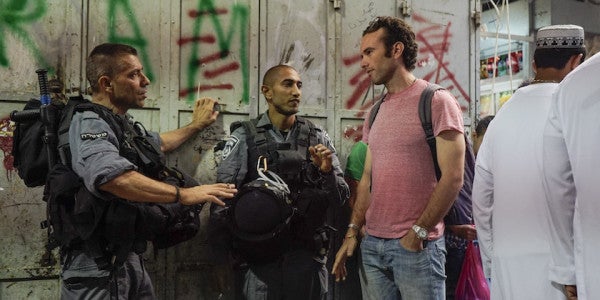 In the fall of 2016, while writer Elliot Ackerman was on assignment in Iraq for Esquire magazine, he found himself on a rooftop in recently liberated Fallujah, peering down at a knee-high cinderblock wall. Before he was a writer, Ackerman was a Marine infantry officer, and for a few tense minutes during the Second Battle of Fallujah, that wall had been all that stood between Ackerman and a barrage of enemy gunfire. Now, after all those years, it was still there. And as he looked out across the neighborhood where his platoon had fought a daylong battle in 2004, it dawned on him: Everything else he remembered from that day was there, too.

“I had changed so much in the intervening years, and on a subconscious level, I had assumed that that place, even the physical elements of it, might have changed, too,” Ackerman told Task & Purpose. “I thought things would have been rebuilt or destroyed. But everything was exactly the same.”

A recipient of the Silver Star, the Bronze Star with Valor, and the Purple Heart, Ackerman is perhaps the most combat-decorated American novelist of the post-9/11 generation. Since leaving the Corps in 2009, he’s written two novels. Both are set against the backdrop of the War on Terror, but neither examines its battlefields through the eyes of an American service member. The first, “Green on Blue,” centers on a young Afghan fighting for an American-funded militia. The second, “Dark at the Crossing,” follows an Iraqi who earned American citizenship by working as an interpreter for U.S. Special Forces troops in Ramadi only to return to the Middle East years later to fight in the Syrian Civil War.

To research “Dark at the Crossing,” Ackerman himself returned to the Middle East. For several years, he lived in Turkey, spending much of his time on the Turkish-Syrian border, where refugees, mercenaries, reporters, scavengers, and aid workers intermix in the shadow of a conflict that has raged unabated since the summer of 2011. When we first meet the novel’s protagonist, Haris Abadi, he’s preparing to smuggle himself into Syria, where he hopes to join a faction of the Free Syrian Army. Meanwhile, he finds himself playing intermediary in a failing romance between two Syrian refugees, a relationship that serves as a parable for the gridlocked revolution on the other side of the border.

“When people ask me what the novel is about, the closest I’ve come to a one-sentence answer is that it’s a story of a failed revolution told through the prism of a failed marriage,” Ackerman says. “I’m looking for that emotional equivalency here.”

Task & Purpose spoke to Ackerman about his new novel, the Trump administration’s controversial immigration policy, and the ongoing wars in Iraq and Syria. Below is a lightly edited version of that conversation.

What draws Haris Abadi back to the war?

Abadi is sort of a man with two identities. He’s an Arab-American. He’s drawn to the war, but he’s also drawn to leave the war and go back to the U.S. So he’s a man in conflict with himself. One of the things that interests me about war is that it can represent two different things. Some people go to war because it’s a redemptive act. It’s an ideological action. A positive. Or for very negative dark, dark reasons. Like almost as an act of self-destruction.

So there’s this moment in the novel “Anna Karenina.” It’s this tomb of a book. It’s 900 pages about this woman, Anna, who has an affair with this guy, Count Vronsky — and you get to the end, and she throws herself in front of a train and kills herself. Count Vronsky starts out as a soldier and gives up his military career to be with Anna, and the last you hear of him after Anna’s suicide is that he’s spotted on a train going out to the Caucasus to go join the war that’s being fought on the frontier. It’s an incredibly sad ending. But it also poses this question: Why is Vronsky going back to the wars? Is he going back to the wars to redeem himself? Or is he going back to the wars to destroy himself? You don’t really know. It leaves that question hanging. And when you first meet Haris Abadi that’s sort of the question. You don’t know, and I don’t think he even knows in a lot of the book. It’s him trying to figure it out.

Do you draw a direct link between the American occupation of Iraq and the Syrian Civil War?

Yes, but I think there are a lot of intermediate steps that get you there. I think the U.S. invasion of Iraq caused there to be a very real disruption of the old social order. And that social order was not a good social order. It was a rotting social order, but it existed. We saw the war play out over the aughts and then you have the Arab Spring. In Syria, the Arab Spring kind of went off the tracks and left a power vacuum and that power vacuum has been filled by a lot of remnants of what was al Qaeda in Iraq. I think the Iraq invasion was a significant variable in what we’re looking at, which is a much longer existential crisis in the Middle East. How is that region going to be organized, and what is the soul of it going to be? And that’s what the wars are about in Iraq and Syria, as well as all of the political instability in the region.

Are you suggesting in this book that the way American counterinsurgency was conducted in Iraq was counterproductive?

I hate writing that tells the reader what to think. I saw and have been a party to very heavy-handed raids in Iraq and Afghanistan, and I’ve sat around with Marines saying, “Wow, you know, I get why they don’t like us. I would be laying in IEDs and taking pot shots at us with sniper rifles, too, if they came to the U.S. and did what we’re doing.” But at the same time I don’t think that completely absolves the other side of culpability. I think everyone is to blame. That’s the point. Nobody has clean hands. That’s the nature of war.

Did you write this book with veterans in mind?

No. People oftentimes read my bio into the book, but I’m just trying to write a good book. I’m very glad if veterans read it and appreciate it. Oftentimes, particularly with international events, the events are so complex that it’s very difficult to understand them and get down to their emotional truths. So what I’m trying to do with the book is distill these kind of almost impenetrable political events into a story that captures the emotional core of what’s going on. You see that with Amir and Daphne. To me so much of the book is about the two of them and how they’re reckoning with their failed revolution.

I have had a lot of Syrian friends who were very active in the revolution in 2011 and 2012 say things to me like, “You can’t imagine how it felt my whole life, never being able to say what I wanted to say. You can’t imagine how it felt like to walk out on the street and scream at a police officer and tell them what I thought. And then the whole thing failed. I fell in love with the revolution and then it failed and broke my heart.” So, if you think about it, when two people get married. There are two people who have an idea of what they can be together. They completely upend their worlds to create this world as a couple. And then when it fails, it breaks their heart in the same way. So, just like a marriage is the adventure of the heart, so is a revolution. You ask: Who is the reader? It’s great if I reach a veteran reader. I’m excited about that. But a veteran reader doesn’t have as far to go to understand this as, like, a homemaker or a guy who works in a factory in the middle of the country.

Do you think barring the Syrian refugees from entering the United States will spare us from the ramifications of that crisis?

I think the entire thing is disgraceful. I think we’re fighting wars by proxy in both Syria and Iraq. Iraqis and Syrians, particularly Syrian Kurds, are basically doing the bidding of the U.S. government and fighting in alignment with the interests of the American people. We were letting many people in in the first place, and now we’re saying, “zero.” The way we structure our society, we outsource our wars, which I think is really problematic. So I think right now, in regards to our foreign policy, we are running enormous moral hazards. I think this latest refugee ban is just raising the stakes one level higher. One more point: The most American people I’ve ever met have been Iraqis and Syrians, if you subscribe to the idea that America is an idea. Germany, France, China, all those nations are sort of defined by an ethnicity and a physical border. They’re not really an idea. America is an idea and it always has been. The great experiment.

So I would say the people who are the most American are the ones who subscribe themselves most closely to that idea and live life in accordance to that idea. And when we lose sight of that fact as Americans and we’ve sort of lost our way, I’d say that’s un-American — saying that America is just borders and the people who happen to live within them. Again, the most American people I’ve met, in many respects, have been Iraqis, Syrians, Afghans — and it’s a shame we’re not letting them come settle here.