Arlington National Cemetery Is Running Out Of Space. Maybe We’re Asking The Wrong Question About How To Fix It

Arlington National Cemetery will run out of space for new burials within the next 25 years, according to the Army,... 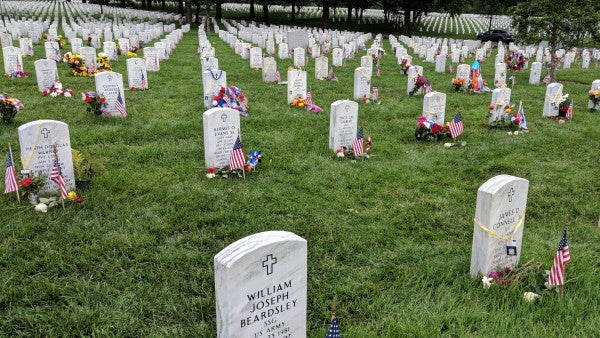 Arlington National Cemetery will run out of space for new burials within the next 25 years, according to the Army, which manages that 624-acre patch of hallowed ground just outside of Washington, D.C.

Roughly 420,000 veterans and their relatives are currently buried there, with 7,000 more added each year. The cemetery, surrounded by development and highways, has a finite amount of space, which has spurred proposals to address the problem.

The Army has proposed making the requirements for burial there more stringent — perhaps by limiting internment only to those killed in action or recipients of the Medal of Honor — while others say Arlington could be expanded to other sites in the greater Washington area.

On Tuesday, I visited Section 60 — the home of many killed in our post-9/11 wars — to visit the grave of Marine Staff Sgt. Jason Ramseyer. It had been many years since I had visited the final resting place of my cherished mentor and friend.

After I wiped away my tears, I looked up and saw the previously-small trees among the graves had now become giants. But most strikingly, the rows of neatly-aligned graves that could be counted on one hand during my previous visit were no more. Instead, this time, they went so far back that I couldn't see the end from where I stood.

It was a stark reminder of the staggering cost of what many have dubbed the “forever war.”

It's been almost 17 years since the September 11th attacks and the start of the war that it wrought. And while we can try to answer the question of what to do to solve the space issue at Arlington, perhaps it's worth asking a different one: What can we do to ensure there are fewer Americans that need to be buried there in the first place?

To be clear, the number of post-9/11 generation of veterans buried at Arlington pales in comparison to those who served in past conflicts such as World War II, Korea, and Vietnam that are dying at a far greater rate.

I don't doubt that the people in charge at Arlington will come up with a solution to solve this shortage of land. I personally agree with my fellow Marine veteran Elliot Ackerman, who invoked President Abraham Lincoln while making the case that new locations for Arlington expansion could still be considered hallowed ground since it is consecrated by those who died, not by those who lived.

As the current estimate makes clear, if nothing meaningful is done, Arlington will be full by about 2041.

But if nothing is done to rein in our tendency to wage war without any meaningful conclusion, I fear that we'll be far worse as a society than having to find an answer on how best to deal with cemetery capacity. As I think back to what seemed an endless amount of graves for my post-9/11 brethren, I wonder how many more plots will be dug in that section, and for what combat action still carried out under a flawed congressional authorization, in which other country, and at what cost to not only those we lose, but to the families and friends who often visit their final resting place, take a knee, and cry.

“We don't have to accept a world in which the globe is a battlefield in a boundary-less war that can never end,” Rosa Brooks, a former Pentagon staffer, wrote in her widely-praised 2017 book. “We tend to forget this. Instead, we defer to the lawyers: we ask, does the law define such and such kinds of contested relationships as 'armed conflict'? Does the law permit State A to use force inside the borders of State B in such and such circumstances? Does the law permit us to locate an ordinary young man thousands of miles away, and guiltlessly transform him, with the push of a button, into a mass of pulverized flesh and bone?”

She continues: “We should be asking a far more urgent question: What kind of world do we want to live in — and how do we get from here to there?”

I'm not naive. I know that the United States faces threats from terror groups, nation-states, and many other bad actors — and those threats will require military service members to stand up to them and fight for many years to come. Some of them, unfortunately, will die.

During my visit, an older man and woman walked up, just as I was kneeling in front of my friend's headstone, weeping, while my fiancé stood silently by my side. They carried with them a poster board filled with photographs, and the woman carefully planted it next to the grave of a Marine gunnery sergeant killed in Iraq in 2004. They both told me they were his parents, and I awkwardly hugged his mother and cried with her.

“It never gets any easier,” she told me of visiting the grave of her son. I told her that I was so sorry for her loss, and left her to mourn privately. But her statement will stay with me. To me, there's more meaning in it beyond just her loss, sadness, and wanting to make sense of all this.

It will never get any easier.

But perhaps we can make it more difficult for our leaders to involve us in the conflicts that are still over the horizon. Maybe we can be more skeptical of the future war drums and be cognizant of our past mistakes. Perhaps we can demand our military leaders truthfully answer what winning a war on terror looks like, and if that goal is actually attainable. Or maybe we can ask that our politicians come to Section 60, walk the rows of granite, and see the true cost of a war without end.

And just maybe, we'll get closer to the world we all want to live in.