Arlington National Cemetery Is Running Out Of Room

Arlington National Cemetery is perhaps the most hallowed, and sought-after, space to bury American service members. But after 150 years... 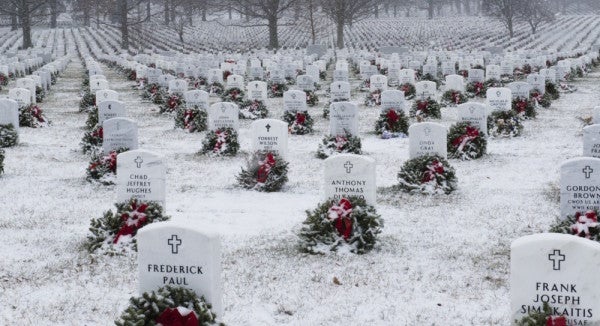 Arlington National Cemetery is perhaps the most hallowed, and sought-after, space to bury American service members. But after 150 years in operation, it’s running out of room.

The Senate Appropriations Committee held a hearing Mar. 29 to discuss current issues and future proposals to honor the lives and deaths of those who served. Space to bury these veterans and their family members, it turns out, will be one of the panel’s greatest challenges in coming years.

By the year 2041, “Arlington National Cemetery will not be a burial option for those service members who served in the Gulf War and any conflict afterwards,” Karen Durham-Aguilera, executive director of the Army National Military Cemeteries, said in her testimony before the panel, adding that the cemetery will either require changes to its current footprint or eligibility policies in order to remain open.

More than 400,000 people have been interred in Arlington National Cemetery since its opening, and 4 million Americans are estimated to visit the grounds every year. But the cemetery is already nearing total capacity. 7,140 veterans and eligible family members were buried there in 2016 alone, reported Military Times. As part of the Millennium Project, 28,000 new grave sites are supposed to be available in 2017. But it’s a stop-gap measure at best.

In order to stay open, some cemeteries recycle graves, like the City of London cemetery, which recently began reusing graves that are more than 75 years old. However, disturbing the graves of those long-buried in Arlington National Cemetery could be viewed as desecration.

But there are options outside Arlington National Cemetery.

“Veterans deemed eligible for burial in Arlington National Cemetery are more than likely also eligible for burial in any of VA’s 135 national cemeteries across the country,” Jessica Schiefer, who works for the Department of Veterans Affairs National Cemetery Administration, told Task & Purpose. Forty states and Puerto Rico boast VA cemeteries, in addition to various state-level interment options for veterans, all of which are searchable on the VA’s website.

Still, Arlington is Arlington. “Arlington National Cemetery is a unique and iconic place,” Durham-Aguilera told the Senate panel. Given that the nation’s supply of war veterans — and their demand for a stately resting place — is unlikely to shrink soon, Arlington’s future iconic status may depend on outside-the-box thinking very soon.