How Do We Really Define The War On Terror? Notes From A Generation At War

How do we define the amorphous and endless War on Terror? Do we measure the war by the money spent?... 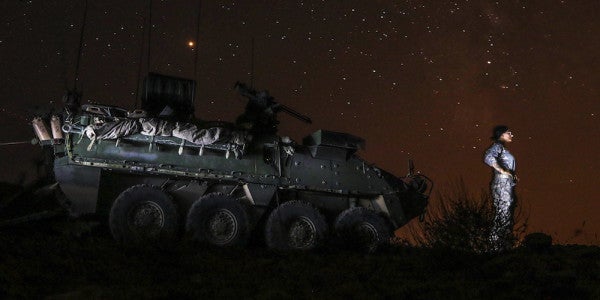 How do we define the amorphous and endless War on Terror?

Do we measure the war by the money spent? Do we define it by the absence of a grand strategy and its political consequences? Or do we define the war at the individual level, by the generation tasked to fight it–by the grave markers in Section 60 in Arlington Cemetery? Or is the war more aptly defined by the chasm between those who fight and those who go about their lives seemingly oblivious to the cost and sacrifice of military families?

These were the questions “A Generation at War,” a discussion hosted in Washington in late September by the New York Times, attempted to answer. The panel comprised of C.J. Chivers, a New York Times journalist; Tammy Duckworth, a U.S. senator and a Purple Heart recipient; and Bonnie Carroll, retired Air Force Reserve officer. Moderated by Eric Schmitt, a Times correspondent, the discussion touched on the major themes of the perpetual War on Terror, ranging from the difficulty of the home front to the human cost of war, and how defining it defies any simple, easy narrative.

Often the discussion meandered, the panelists struggling to piece together the experiences of a generation at war into digestible, sensible bits. Having covered the war from the perspective of the rank and file of the U.S. military, C.J. Chivers poignantly argued that although the American public largely respects the military, it remains detached from the sacrifices of service members and their families.

Service members and their families “suffered in ways that were very common and palpable, but very private,” Chivers said. “People come home now, and I think they are widely respected and generally ignored, and so they come home to a lot of gestures that feel hollow. The yellow ribbons, the free tickets to Fenway, sort of a ritualized worship that doesn't amount to much practically. And those who are struggling often struggle alone.”

Speaking to the political aspect of the war, Senator Duckworth stated, “You have a disconnect between those who are sitting in the halls of power and the people we send off to war.” She emphasized that this disconnect enabled those in Congress to be complicit in perpetuating the war without tangible objectives while avoiding tough decisions such as the re-authorization for use of military force (AUMF). Due to the absence of political consequences, Senator Duckworth commented, “We can hide from this and avoid having these votes and just have this endless war that just keeps on going and going.”

People come home now, and I think they are widely respected and generally ignored, and so they come home to a lot of gestures that feel hollow. The yellow ribbons, the free tickets to Fenway, sort of a ritualized worship that doesn't amount to much practically. And those who are struggling often struggle alone

When asked about the civil-military gap, David Anderson, a Marine Corps veteran, said, “I think it’s a misperception…if your perception is driven by movies or television, if your understanding of veterans comes from watching SEAL Team 6 television shows or NCIS, then you’re not getting the full picture, veterans become characters in a movie not actual people, to a certain extent.”

Lindsey Ricchi, a law student at George Washington University, stressed her own struggle to understand the difficulties service members go through: “We don’t understand, and barring myself going into that kind of situation I don’t know how I could understand other than talking to people. I get a sense of empathy but also of frustration because I don’t know what I could do to help bridge that divide.” However, after listening to the panel, she said that “sharing stories is a really big part of it.”

In the end, the answer may not lie in grand panels dissecting the war, but in the simple human act of connecting with one another – having the difficult conversations, we as a society have been avoiding for too long.

Sebastian J. Bae served six years in the Marine Corps infantry, leaving as a Sergeant. He deployed to Iraq in 2009. He has published in Foreign Policy, War on the Rocks, Strategy Bridge, Task & Purpose, the Diplomat, and Georgetown Security Studies Review.

Antonieta Rico is a U.S. Army veteran. She worked in public affairs and has embedded with infantry units during combat operations in Iraq. She is currently a Fellow at Women In International Security and most recently worked as the Director of Communications and Policy at the Service Women’s Action Network, a national advocacy organization for military women and women veterans.