The crash of an Air Force HH-60 Pave Hawk helicopter in March was caused by the aircraft flying into steel... 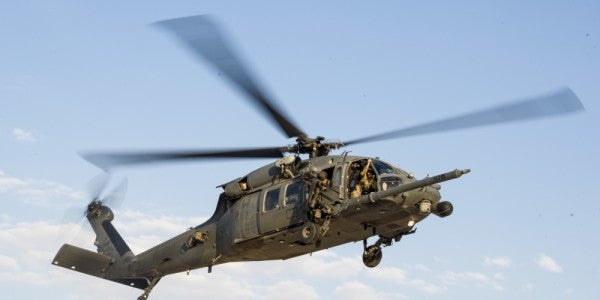 The crash of an Air Force HH-60 Pave Hawk helicopter in March was caused by the aircraft flying into steel power lines strung between two high towers, an investigation into the fatal mishap determined.

Seven airmen were killed when the helicopter went down in western Iraq, near the Syrian border. The Pave Hawk ran into the cables while flying at 125 knots at between 250 and 270 feet off the ground, according to the aircraft accident investigation board report, which the Air Force released on Monday.

Once the cable became tangled around the main rotor, the helicopter “suffered catastrophic structural failures and was completely uncontrollable prior to impact with the ground,” the investigation found.

On the night of the crash, the HH-60 and another helicopter were flying to an area close to an operation so they could be ready in case needed for rescue missions, according to the investigation report.

The investigation identified several errors leading up to the crash. The helicopter accidentally flew past its landing zone when it made a wrong turn, yet the aircraft’s crew was sure it was heading in the right direction even though their navigation equipment indicated that they had passed their destination.

Part of the confusion stems from the navigation route that the crew planned, according to the investigation. The route contained seven “navigational waypoints” to help orient the crew, but only the first three led to the landing zone.

The remaining four were not part of the mission that night. They were intended to be used only if two helicopters needed to be on alert for rescue missions and were meant to be flown at higher altitudes.

After talking to the JTAC, both helicopters turned toward a waypoint that was not part of that night’s mission, flying past the landing zone in the process, the investigation found. When the helicopter began descending, it ended up between four towers with power lines.

Both the pilot and co-pilot reacted “swiftly and calmly” when the main rotor became ensnared, but the aircraft soon began to break up. “Based on the estimated acceleration forces, the crash was not survivable,” the investigation says.

The bright light from the crash’s explosion helped the crew of the other helicopter see the power cables in time to avoid them, according to the investigation.

“This was the first and only time leading up to the mishap any members of the MF were able to see the cables strung between the different set of towers,” the investigation found.

SEE ALSO: 2 FDNY Firefighters Were Killed In The Helicopter Crash In Iraq