Nine members of the Puerto Rico Air National Guard’s 156th Airlift Wing were killed on Wednesday when their WC-130 crashed... 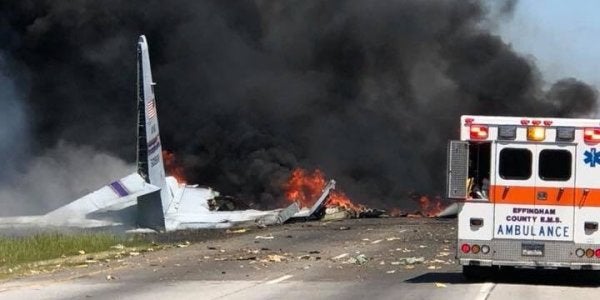 Five of the airmen were crew members, two were maintainers and the other two were operations personnel, Maj. Paul W. Dahlen told Task & Purpose on Thursday. They were all stationed at Muñiz Air National Guard Base in Carolina, Puerto Rico.

“Ever since yesterday afternoon, all throughout the evening, we’ve been individually reaching out to each family member to ensure that they’re aware,” Dahlen said. “We just completed it last night and now we’re in the process of releasing the names of those involved.”

While performing a training mission, an U.S. C-130 "Hercules" cargo plane from the Puerto Rico Air National Guard crashed about 11:30 a.m. today near the Savannah Hilton Head International Airport with 5 people on board. (1/2)

Pictures from the scene show the plane’s wreckage and plumes of gray smoke billowing into the sky.

Military c130 down at 21 and Gulfstream Rd. Avoid the area. 21 shut down until further notice. pic.twitter.com/6hUqwmkNUu

It was not immediately known what military branches all of the five service members were from. Their names are being withheld pending next of kin notification.

The National Guard said emergency personnel were on scene and that a board of officers will investigate the case of the crash.

This is a breaking news story and will be updated with new information as it becomes available.

UPDATE: This story was updated on May 3 after the Puerto Rico National Guard confirmed that nine members of the 156th Airlift Wing had been killed in the crash.