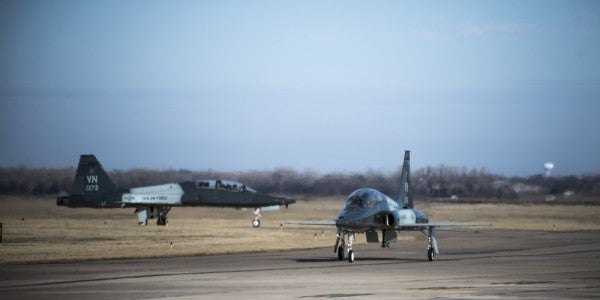 Two airmen from Vance Air Force Base, Oklahoma, were killed on Thursday when two T-38 Talon training aircraft crashed during training mission, according to a message posted on the base's Facebook age.

The two airmen's names are being withheld pending next of kin notification.

A total of four airmen were onboard the aircraft at the time of the incident, base officials had previously announced.

The medical conditions for the other two people involved in the crash was not immediately known.

An investigation will be launched to determine the cause of the crash.

Emergency responders from Vance Air Force Base are at the crash scene to treat casualties and help with recovery efforts.

Read the entire message below:

At the time of the accident, the aircraft were performing a training mission.

Vance emergency response personnel are on scene to treat casualties and assist in recovery efforts.

Names of the deceased will be withheld pending next of kin notification.

A safety investigation team will investigate the incident.

Additional details will be provided as information becomes available. #VanceUpdates.

This is a breaking news story. It will be updated as more information is released.