Three soldiers were killed and another three injured while riding in their Bradley Fighting Vehicle during a training accident at Fort Stewart in Georgia on Sunday morning, Army officials announced 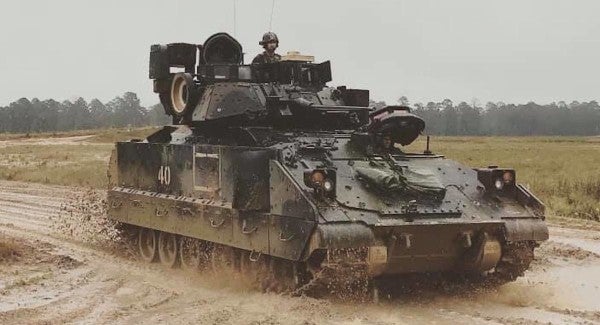 Three soldiers were killed and another three injured when their Bradley Fighting Vehicle rolled over during a training exercise at Fort Stewart in Georgia on Sunday morning, Army officials announced.

The soldiers, assigned to 1st Armored Brigade Combat Team, 3rd Infantry Division at Fort Stewart, were pronounced dead a the the site of the accident, which occurred around 3:20 a.m., Fort Stewart public affairs
announced in a statement on Sunday.

The three injured soldiers were evacuated to Winn Army Community Hospital for treatment and evaluation. Two have already been treated and released, while the third has been transferred to Memorial Hospital in Savannah, Georgia, with non-life threatening injuries.

The vehicle has already been recovered by 3ID personnel and the incident is currently under investigation.

As is Defense Department policy, the names of the soldiers killed in the incident are being withheld until the notification of their next of kin.

“We are extremely saddened by the loss of three Dogface Soldiers, and injuries to three more,” Aguto wrote. “Our hearts and prayers go out to all the families affect by this tragedy.”