This is developing news. Task & Purpose staff will update as more information becomes available. A two-seat F-16 belonging to... 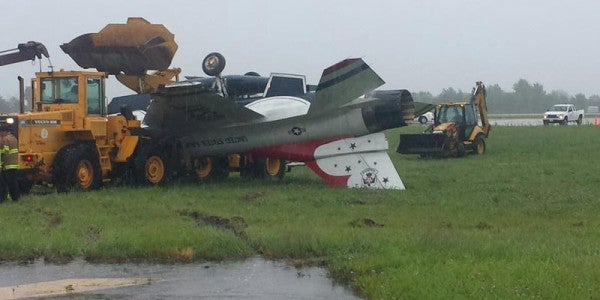 A two-seat F-16 belonging to the Air Force Thunderbirds flight demonstration team crashed at the end of a preparation flight for the Dayton Air Show this afternoon, according to local news sources.

Eyewitnesses say the jet had just landed at Dayton International Airport and had begun taxiing when it flipped over and into the grass, according to the Dayton Daily News, which is live-blogging the incident. Local news also broadcast the incident live on Facebook.

The aircraft’s two occupants were reportedly trapped in the cockpit, and first responders are at work rescuing them. Those responders include EMTs from nearby Wright-Patterson Air Force Base, a spokeswoman told the Daily News.

Ricardo Von Puttkammer, who was covering the air show for Aviation Photojournal, told the Daily News that “it appeared that a gust of wind flipped the F-16 on its top.”

Local TV reports storms were heavy near the airport during the show.

T&P; will update as we get more information.

The Daily News is reporting that both occupants have been able to exit the F-16's wreckage; their conditions are unknown.

Meanwhile, the Thunderbirds have released a preliminary statement about the mishap:

The Thunderbirds say their crew will be alright, but it's unclear whether the team will perform as scheduled at the air show this weekend.

UPDATE: The plane sustained damage and the pilot and his passenger, a tactical aircraft maintainer, were taken to a local hospital.

The pilot and passenger are receiving care and currently in good condition.

The T-Birds' Navy counterparts offered some solidarity on social media: