The FBI is investigating the crash and explosion of a car at Travis Air Force Base as an act of... 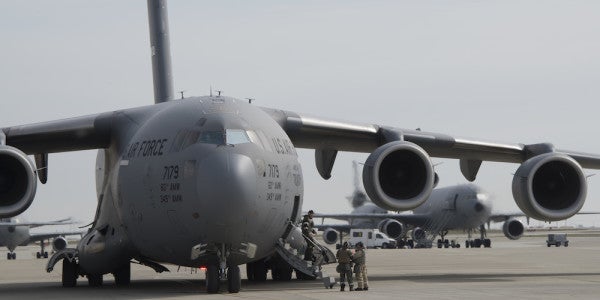 The FBI is investigating the crash and explosion of a car at Travis Air Force Base as an act of terrorism, according to media reports.

Law enforcement officials told CBS News that the car was loaded with propane tanks that the driver ignited, sending the car up in a ball of flame at the main gate to the Northern California base. The driver, who died in the car, has not been publicly identified by law enforcement.

“The driver of the vehicle was pronounced dead at the scene,” the 60th Air Mobility Wing announced in a news release. “There were no additional fatalities or injuries.”

The incident bears similarities to the car bombs that US troops have faced in Iraq and elsewhere, known to the military as suicide vehicle-borne improvised explosive devices, where a militant uses a car laden with explosives to strike at base access points or crowded areas.

An FBI spokeswoman would not confirm CBS News’ reporting that investigators are treating the incident as an act of terrorism.

“The matter continues to be a joint investigation with [Air Force Office of Special Investigations],” Gina Swankie said in an email to Task & Purpose. “We are working together to understand the Travis incident and we have few answers to provide at this time.”

UPDATE: This story was updated on March 23 to include a statement from an FBI spokeswoman.