Russia, Our New Anti-Terror ‘Ally’, Is Spying Inside The US Like It’s 1959

Whatever you think of all the blather about the current U.S. administration and Russia — and for all the damning... 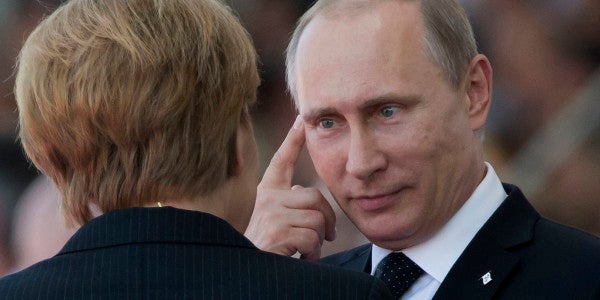 Whatever you think of all the blather about the current U.S. administration and Russia — and for all the damning facts out there, there’s a ton of dumb bluster — Russia is not America’s friend.

The latest evidence is a new Politico report that Russian “diplomats” with immunity from criminal prosecution are fanning out across America to look for infrastructural vulnerabilities — crucial stuff like fiber optics and telecom lines — even as authorities in Moscow harass, obstruct, and occasionally beat American diplomats and spies within an inch of their lives.

Related: US Army Trying To Figure Out How Racist Russian Separatist Fighter Enlisted »

This story begins with FBI investigators going crazy during the 2016 campaign trying to keep tabs on Russian diplomats in the U.S. who had slipped away from State Department surveillance:

The diplomats, widely assumed to be intelligence operatives, would eventually turn up in odd places, often in middle-of-nowhere USA. One was found on a beach, nowhere near where he was supposed to be. In one particularly bizarre case, relayed by a U.S. intelligence official, another turned up wandering around in the middle of the desert. Interestingly, both seemed to be lingering where underground fiber optics cables tend to run.

According to another U.S. intelligence official, “They find these guys driving around in circles in Kansas. It’s a pretty aggressive effort.”

It’s a trend that has led intelligence officials to conclude the Kremlin is waging a quiet effort to map the United States’ telecommunications infrastructure, perhaps preparing for an opportunity to disrupt it.

Pause for a moment to imagine how freaked out you’d probably be if you read that a brown dude from Syria — or, hell, Dearborn, Michigan — was wandering around the U.S., taking note of vital fiber optics and telecom nodes. Logic would dictate that you should be at least that freaked out by reports of the same behavior in one of America’s greatest historical adversaries, whose prowess at espionage and covert action makes Project Mayhem look like a preschool food fight.

Related: Of Course Blackwater’s Founder Is Involved In The Trump-Russia Probe Now »

Now, the good news here, if you can call it that, is this isn’t a strictly partisan issue; every administration since the dawn of the “global war on terror,” Republican or Democratic, has basically been caught flat-footed by Russia’s ratfucking spies in the U.S., given that our intelligence and law enforcement agencies have been really busy trying to bust terrorists. “We’ve definitely been ignoring Russia for the last 15 years,” one intel official told Politico.

The flip side of this is that American diplomats (and yes, spies) in Russia have been literally savaged by Kremlin goons for years — and the incidents are getting worse, not better. In late 2015, they roofied two State Department officials at a UN anti-corruption conference. In 2016, they beat the holy hell out of another U.S. official walking into the American embassy in Moscow. (According to Watkins’ report, that man was indeed a CIA officer who had slipped his Russian tail, so the Kremlin ordered a spy whom “the man wouldn't recognize to wait outside the embassy for his inevitable return.” That spy intercepted the American officer and thrashed him “so badly he was immediately flown out of the country for urgent medical attention.”

But wait, there’s more! U.S. diplomats’ homes being burgled, tires getting slashed, the list goes on. One American diplomat “reported that an intruder had defecated on his living room carpet,” according to Josh Rogin, the Washington Post foreign policy reporter. Rogin also cited an incident in the early Obama years in which “Russian intelligence personnel broke into the house of the U.S. defense attache in Moscow and killed his dog.”

The Obama administration talked a tough line publicly on Russia, but to little effect — Kremlin efforts to annex Crimea and screw with U.S. elections (something the entire intelligence community confirms actually happened) continued apace. Only late in 2016, as a lame duck president, did Obama order the expulsion of 35 Russian diplomats in the U.S. and the closure of two Russian diplomatic compounds in Maryland and New York, long believed to host spy tech and operations. Russia appears keen on getting those compounds back:

Russia is seeking to return its diplomatic property in #US🇺🇸 asap.
Otherwise, we will have to take counter measures https://t.co/2MJ4PauEYt pic.twitter.com/kjC1iSQRrc

How has the Trump administration responded to Russia’s continued fuckery on our home soil and against our diplomats abroad? By claiming Russia as a partner against global terrorism and reportedly giving those spy compounds back to Russia with few or no concessions in return — a decision that, strangely, made its way into the news just a week after the Russian embassy in the U.S. tweeted out that tough message you see above.

There has not yet been one solid shred of evidence demonstrating that President Donald Trump personally colluded with Russian authorities during his presidential campaign. But there sure are a lot of indications that he could be hitting the Kremlin’s America-molesting goons harder. If it was Middle Easterners skulking around the American heartland or outside the U.S. embassy in Moscow, this administration would already be declaring war.