Russia's Khmeimim airbase in southwest Syria has increasingly become a target of regular attacks by armed fighters since New Year’s... 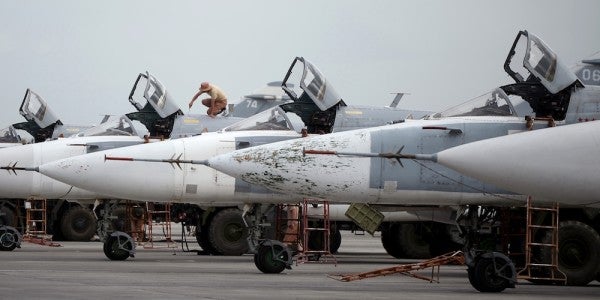 Russia's Khmeimim airbase in southwest Syria has increasingly become a target of regular attacks by armed fighters since New Year’s Eve, when a cadre of “radical Islamists” killed two Ministry of Defense personnel and completely destroyed seven aircraft in a brutal mortar bombardment. Though the Russians now deny the aviation losses, that strike represented one of the Russian military’s biggest debacles since the country became involved in Syria’s bloody civil war in 2015. But a more recent attack on Khmeimim introduced the MoD to a new technological threat — and Russia is not-so-subtly blaming it on the Department of Defense.

On Jan. 5, Russian air defense forces at Khmeimim observed “13 unidentified small-size air targets at a significant distance” from the base, the MoD announced last Monday. Those objects were eventually identified as “assault drones,” 10 of which headed for the base, while the other 3 peeled off toward a Russian naval port in the Syrian city of Tartus.

According to the MoD’s announcement, Russian electronic warfare troops actually took control of six of the “small-size air targets,” successfully landing three in “a controlled area outside the base,” while three others “exploded as they touched the ground.” The remaining seven UAVs “were eliminated by the Pantsir-S anti-aircraft missile complexes operated by the Russian air defence units on 24-hours alert,” the announcement declared.

So where did the jihadis get the know-how to build these (admittedly rinky-dink) would-be kamikaze drones? The Russian military establishment has its thoughts: Must have been those dirty-dealing Americans!

#SYRIA: The fact of using such strike aircraft-type drones by terrorists is the evidence that militants have received technologies to carry out terrorist attacks using such UAVs in any country.

That’s a clear dig at the Pentagon, after months of aerial intercepts and all manner of unsafe maneuvers between Russian and U.S. Air Force aircraft. Never mind that U.S. forces have been more occupied with countering ISIS drones than handing out UAV technology willy-nilly to whoever downrange.

But the Russian MoD was on a roll: Jihadis just couldn’t be this smart or well-resourced without help from “countries with high-technological capabilities of satellite navigation and remote dropping control of professionally assembled improvised explosive devices in assigned coordinates,” the Ministry said in its statement. “All drones of terrorists,” it added, “are fitted with pressure transducers and altitude control servo-actuators,” as well as “foreign detonating fuses.”

Russia continued to advance this bizarre conspiracy theory yesterday, when an unnamed Russian military source told state-run Itar-TASS that a U.S. Navy P-8A was flying between Khmeimim and Tartus on the evening of the drone swarm. It was “a strange coincidence that during a UAV attack on the Russian military facilities in Syria, a US Poseidon reconnaissance aircraft was cruising for more than four hours over the Mediterranean Sea at an altitude of 7,000 meters.” (Officials with the MoD and the Russian embassy in the U.S. did not immediately respond to requests for comment.)

Naturally, DoD claims that allegations the U.S. provided drone materials to militants, let alone scrambled a Poseidon to the area in connection with the attack, is bullshit. “Any suggestion the U.S, the Coalition or our partnered forces played a role in an attack on a Russian base is without any basis in fact and utterly irresponsible,” Pentagon spokesman Eric Pahon told Task & Purpose. “I don't have details about what Russian forces are encountering, but I can tell you that Coalition forces and our partners have encountered commercially-available unmanned aerial systems used by ISIS.” Translation: Don’t blame us for supplying UAV stuff that you can buy pretty much anywhere. (The Russian defense ministry responded to that statement with another masterpiece of online concern-trolling: “What technology are we talking about? Where is this ‘market’ and who is it that sells space intelligence?”)

Given that DoD has been very, very carefully avoiding an armed clash with the Russian military in Syria, it’s a lot harder to believe that the U.S. coordinated a drone swarm against Russian bases than it is to assume that ISIS unilaterally carried out a drone attack. But as far as Russian-backed conspiracy theories go, this one is at least grounded in some history.

Almost exactly one year ago, on Jan. 9, 2017, the Pentagon announced that it had successfully tested a “micro-drone swarm” of 103 Perdix drones at China Lake, California. Designed by Naval Air Systems Command and the Strategic Capabilities Office, the exercise involved deploying the drones from three F/A-18 Super Hornets and demonstrating “advanced swarm behaviors such as collective decision-making, adaptive formation flying, and self-healing.” And yesterday on Jan. 9 Army Times reported that DoD was aiming to field an “autonomous robot swarm of 250 or more drones” controlled by combat troops to “do complex tasks on the urban battlefield.”

“Due to the complex nature of combat, Perdix are not pre-programmed synchronized individuals, they are a collective organism, sharing one distributed brain for decision-making and adapting to each other like swarms in nature,” SCO chief William Roper said at the time. “Because every Perdix communicates and collaborates with every other Perdix, the swarm has no leader and can gracefully adapt to drones entering or exiting the team.” (Roper has since been offered a DoD promotion: He’s now President Donald Trump’s nominee for assistant secretary of the Air Force for acquisition.)

To be clear, the drones captured at Khmeimim look more like flying garbage heaps than the slick Perdix, so the possibility of the U.S. deliberately supplying militants with next-generation drones is, well, zilch. Even with the DoD’s propensity to lose millions in weapons, equipment and other gear downrange — and for those items to end up in militant hands — it seems unlikely that Russian military engineers will find Air Force fingerprints on the combat drones. ISIS militants, on the other hand, have enjoyed a revolutionary leap forward in terror tactics in recent years, and have notoriously cannibalized commercial tech to fabricate their new sentinels.

“These systems are widely available, easy to control, and certainly do not require significant technical expertise,” Pahon, the Pentagon spokesman, told Task & Purpose. “You can buy them pretty much anywhere on the Internet. These systems have been used to conduct basic reconnaissance and to emplace or drop small explosives.”

Conspiracy theories aside, the advent of the drone swarm — a distributed, autonomous fleet of low-cost, high-explosive UAVs launched by whoever — is moderately terrifying. But the DoD isn’t quite as worried concerned about the threat as the Russians are.

“While these systems are certainly deadly, they have not had a significant impact on Coalition operations to date,” Pahon said. “We take appropriate force protection measures to ensure Coalition forces and our partners can safely carry out their missions.”