With ISIS expelled from its de facto capital in Syria and ousted from its last urban stronghold in Iraq, the... 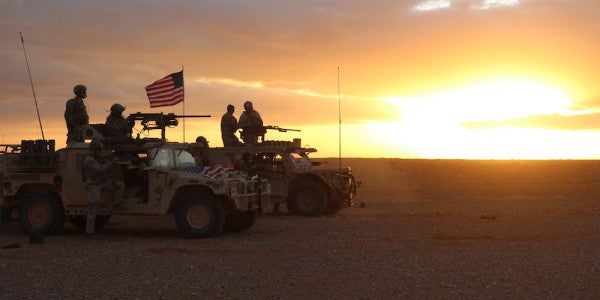 With ISIS expelled from its de facto capital in Syria and ousted from its last urban stronghold in Iraq, the Department of Defense finally announced the number of U.S. military personnel on the ground in the region… sort of. On Nov. 27, the Pentagon pegged the number of publicly disclosed troops at around 1,720 in Syria in the Defense Manpower Data Center. The new DMDC data appears to reflect a threefold increase over the 507 troops frequently cited by defense planners as “official” troop levels in the country.

The DoD’s latest announcement appears intended to reduce confusion over contradictory deployment figures. In August, just days after President Donald Trump laid out his strategy for the War on Afghanistan, the DMDC on Aug. 23 reported what seemed like a sudden disclosure of 12,000 troops in the country, 3,500 more than the DoD had previously acknowledged. Most recently, a Nov. 24 Reuters report suggested that the DoD planned on unveiling new troop levels at “about 2,000.” Speaking to Reuters Sunday, U.S. officials sought to frame the new disclosure as part of Secretary of Defense James Mattis’ efforts to address the opaque force management levels in response to the August Afghanistan flap.

But a Pentagon spokesman told Task & Purpose today that the official number of deployed U.S. personnel in Syria “remains 503” — not 2,000 or even the 1,720 listed in the DMDC — a confusing assertion that does little to clarify U.S. commitments in the seemingly endless global campaign against ISIS that has drawn ire and frustration from lawmakers as combat deaths among U.S. military personnel in 2017 increased for the first time in six years.

“I recognize the reporting out there, we haven’t changed anything,” Pentagon spokesman Eric Pahon told Task & Purpose. “We have a whole bunch of reasons those numbers are not an accurate reflection of who is actually on the ground.”

Part of the problem stems from the discontinuity between Force Management Levels — the troops assigned to a defined “enduring mission,” like Operation Inherent Resolve against ISIS or Resolute Support in Afghanistan, that are subject to congressional oversight — and the broad military personnel numbers detailed in the DMDC. The latter doesn’t always reflect official changes to the former, functioning more as a measure of “warm bodies” in a given geographical region. If troops make a pit stop in Syria en route to another country, they’re counted in the DMDC, even if they’re not committed to an enduring military operation like, say, Operation Inherent Resolve.

As a result, DMDC data presents a woefully incomplete public snapshot of the actual combat operations. According to Pahon, several categories of DoD personnel are included in DMDC reports but excluded from FML totals ”consistent with longstanding practice,” including:

Among the U.S. military personnel excluded from both the FML and DMDC: the special operations forces who increasingly bear the brunt of combat deaths downrange as the DoD’s front line troops in the global campaign against terror. Of the 200,000 U.S. troops deployed overseas as of May, some 8,600 are U.S. Special Operations Command personnel, most deployed across the Middle East or Africa, where documents obtained by Vice News indicate some 1,700 SOCOM personnel conduct hundreds of missions a day across 20 countries.

“The operational tempo is so incredible,” Sen. Jack Reed, Democrat from Rhode Island and a ranking Senate Armed Services Committee member, observed during a policy forum in Washington, D.C., on Nov. 14. “That in and of itself causes lots of consequences … And we haven't seen a break in those deployments.”

Despite the secrecy surrounding SOCOM missions required to maintain operations security, the consequences of those deployments are increasingly apparent to the American public. The deaths of four Army Special Forces personnel in Niger on Oct. 4 reawoke voters and lawmakers to the Pentagon’s amorphous shadow war.

And that trend is again growing obvious in Afghanistan, where the DoD on Nov. 27 disclosed an estimated 24,000 U.S. troops in the DMDC. The majority of U.S. combat deaths in Afghanistan this year were suffered by U.S. special operations forces — fighting ISIS, not the Taliban or Al-Qaeda.

Related: SOCOM Is In A Prison Of Its Own Making »

Ironically, the closest accurate approximation of U.S. troop levels in Syria may have come from a verbal slip last month by the commander of the special operations task force responsible for defeating ISIS there. On Oct. 31, Army Maj. Gen. James Jarrard stated that the U.S. had a “little over 4,000” troops in Syria at the moment; Jarrard quickly backtracked to the official 503 figure from the FML, claiming that he “misspoke” (a claim the Pentagon quickly embraced when contacted by Task & Purpose). But the accidental reveal now appears accurate in light of the Nov. 27 DMDC update.

The upshot is that taxpayers have to discern the scope and shape of America’s forever wars from the negative space between byzantine DoD reporting mechanisms. And even the DoD is uncomfortable with that state of affairs. While a Pentagon spokesman told Task & Purpose on Aug. 23 that DoD personnel “are not going to discuss numbers,” Pahon said that defense officials are actively rethinking how to effectively balance operational security and public transparency as the war-weary public slouches towards the end Global War on Terror’s second decade.

But given the overlapping measures of troop deployments and shifting criteria for public disclosure, the Global War on Terror is beginning to resemble the very foe it was intended to destroy: a many-headed hydra.