How Many US Troops Are Currently Fighting In Afghanistan? The Pentagon Won’t Say

Unveiling his long-awaited plan for the U.S. military campaign in Afghanistan on Aug. 21, President Donald Trump made an unusual... 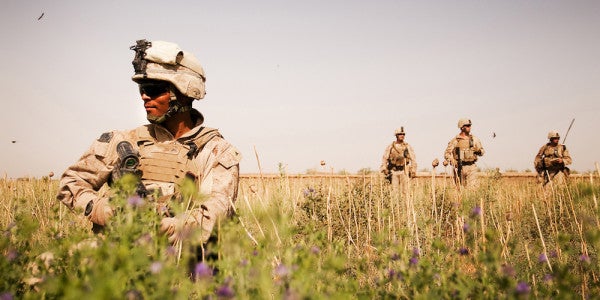 Unveiling his long-awaited plan for the U.S. military campaign in Afghanistan on Aug. 21, President Donald Trump made an unusual statement: The 16-year-old forever war will go on without specific troop levels and an official end in sight — and the White House doesn’t have to tell you shit about it.

“We will not talk about numbers of troops or our plans for further military activities,” Trump told military personnel assembled at Fort Myer, Virginia, an unusually vague declaration given reports that the Department of Defense would send an additional 4,000 combat troops to bolster counterterrorism and training operations. “Conditions on the ground, not arbitrary timetables, will guide our strategy from now on.

“America’s enemies must never know our plans or believe they can wait us out,” Trump added, citing operational security. “I will not say when we are going to attack, but attack we will.”

Trump’s departure from his predecessors’ tradition of publicly announcing new troop deployments to Iraq and Afghanistan isn’t a complete surprise: In March, U.S. officials told the Los Angeles Times that the administration would stop disclosing new troop deployments to Iraq and Syria to battle ISIS as part of Operation Inherent Resolve. But the commander-in-chief’s statement signals an alarming lack of transparency with regards to the seemingly endless war in Afghanistan.

To that end, Afghanistan troop levels will apparently now rise and fall on an ad hoc basis. “When [Chairmant of the Joint Chiefs of Staff Gen. Joe Dunford] brings that to me, I will determine how many more we need to send in,” Secretary of Defense James Mattis told reporters on Aug. 22 during a visit to Baghdad. “It may or may not be the number that is bandied about.”

Less than 24 hours after Trump’s Afghanistan speech, the Wall Street Journal reported that the DoD has maintained some 12,000 troops in the country for months — around 3,500 more than the Pentagon has acknowledged in the past. This number aligns with the 12,000 personnel listed in the Defense Manpower Data Center’s June statistics on military personnel in Afghanistan.

To be fair, this isn’t a total shock. As the Journal notes, the additional 3,500 troops in Afghanistan are either special operations forces whose missions aren’t publicly disclosed or “other personnel simply there on temporary assignment or other status.” Indeed, the DMDC doesn’t always reflect changes to the official Force Management Level (FML), a cap considered by Congress before each new deployment; if troops make a pit stop in the country en route to, say, Pakistan, they’re counted in the DMDC, even if they’re not committed to a military operation there.

But if the White House won’t announce new troop levels and the DMDC, established in 1974 to help monitor personnel and manpower resources amid post-Vietnam chaos at the DoD, doesn’t necessarily provide accurate data to the public, then where does the Pentagon come down on troop disclosures? The answer is simple: Wherever the commander-in-chief does.

“The President was crystal clear in his speech about discussing troop levels,” a Pentagon spokesman told Task & Purpose. “We are not going to discuss numbers.” When asked how long the DoD had maintained undisclosed forces in Afghanistan before Trump’s Aug. 21 announcement, the Pentagon declined to answer.

Petty Officer 2nd Class Adrian U. Weldon, a corpsman with Headquarters Company, 3rd Battalion, 3rd Marine Regiment, sweeps the hallways of the Aynak School in Afghanistan in preparation for a medical engagement July 24, 2010.

This “opsec” strategy of staying mum makes sense in some cases, but not all. In the case of special operations forces, spearheading counterterrorism operations against Afghanistan’s ISIS-K faction in the eastern part of the country and stretched thin by multiple deployments, covert missions are classified and new deployments rarely disclosed in order to maintain a tactical element of surprise and keep critical intelligence from falling into ISIS or Taliban hands. And this makes absolute sense: If you’re going to send Seal Team 6 into Nangarhar to take out an ISIS commander, you don’t want to telegraph your punch before you throw it.

But in the case of conventional combat troops — namely, those 4,000 potentially authorized by Mattis in the coming weeks — citing operational security is a bit of a dodge. After all, presidents have been happy to discuss troop surges from the Oval Office and to joint sessions of Congress going back as far as the Vietnam War, as Roll Call defense reporter John Donnelly smartly observes.

“In framing the issue this way, Trump conflated three things that are distinctly different: disclosing military plans; announcing deadlines for withdrawal, and informing Americans how many of their family members will be sent into harm’s way,” Donnelly writes. “To be sure, certain details about troop movements and tactics are justifiably classified or otherwise restricted from public view … [But] Trump is unlikely to actually classify the troop numbers.”

This ambiguity over Afghanistan troop levels — taken in the context of the Trump administration's previous statements on troop transparency elsewhere, and considered in the aftermath of a presidential address heavy on terrorist-killing rhetoric and short on details — may rankle an American public deeply concerned about the course of the forever war. The U.S. has spent more than $783 billion and lost more than 2,400 lives fighting the country’s longest war in Afghanistan; the American people deserve to know not just the financial, but human, costs of Trump’s new war without end.