After 16 years and $120 billion spent on the reconstruction of Afghanistan since the U.S. invasion, the Afghan National Defense... 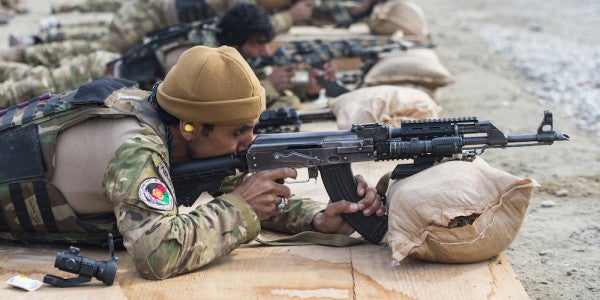 After 16 years and $120 billion spent on the reconstruction of Afghanistan since the U.S. invasion, the Afghan National Defense and Security Forces are alarmingly unprepared to take on the resurgent Taliban that’s slowly clawed back territory since NATO combat operations ended there in 2014. But exactly how unprepared? We may never really know: For only the second time since the beginning of the reconstruction effort in 2002, U.S. Forces-Afghanistan has classified and restricted once-public information regarding the state of Afghan security forces, including “casualties, personnel strength, attrition, capability assessments, and operational readiness of equipment” — all key measures of the country's security woes.

That essentially means the Special Inspector General for Afghanistan Reconstruction — the office that, for a decade, has sought to nail down what U.S. taxpayers actually get for the money spent in Southwest Asia — can’t do its job. “More than 60% of the approximately $121 billion in U.S. funding for reconstruction in Afghanistan since 2002 has gone to build up the ANDSF,” SIGAR chief John. F. Sopko wrote in the agency’s latest quarterly report to Congress, published on Oct. 30. “The increased classification of ANDSF data will hinder SIGAR’s ability to publicly report on progress or failure in a key reconstruction sector.”

Here’s what we do know about the state of Afghan security forces: A September report from the Special Inspector General for Afghanistan Reconstruction indicated that ANDSF is nowhere near its 352,000 target personnel level: Afghan National Army force strength, in particular, fell from 185,817 in September 2013 to 168,327 in November 2016, thanks to increasing attrition rates and fluctuating readiness.

Related: Nobody Knows How Many Afghan Security Forces Really Exist, And The US Can’t Fix It »

But even worse, as of 2017, neither the U.S. nor the Afghan government actually know how many personnel are ready for duty, thanks to the prevalence of “ghost” personnel: phony soldiers used to fence U.S.-paid salaries and equipment. The Combined Security Transition Command–Afghanistan (CSTC-A), tasked with oversight over the equipping and funding of the ANDSF, doesn’t even know where all of its bullets are.

The Department of Defense has only classified these figures once before — in 2015, when the Obama administration “was trying to portray the war in Afghanistan as all but over,” as the New York Times put it; today, the Afghan government appears to be playing defense, as well. According to the Oct. 30 SIGAR report, the Pentagon claimed that ANDSF casualty data “belonged to the Afghan government, and the government had requested that it be classified.” The September SIGAR report indicated that Afghan security forces had effectively closed ranks after the DoD “advocated for the closure of multiple checkpoints and consolidation of forces on fewer bases.” Since that shift, there’s been a significant spike in both civilian casualties and insider attacks; on Oct. 19, the increasingly-emboldened Taliban virtually wiped out a 60-man Afghan National Army unit like it was nothing.

To be fair, it’s not as if disclosing Afghan force levels will solve the transparency problems plaguing the relationship between U.S. forces and the ANDSF. A Sept. 22 DoD inspector general’s report on CSTC-A’s arms and ammunition oversight found that U.S. military personnel literally “could not perform physical inspections beyond the corps or zone level to validate ministry‑provided ammunition reports due to understaffing and security limitations.” The same month, SIGAR flagged a July 2014 weapons audit that floundered thanks to “poor record keeping and attempts by Afghan officials to obstruct entrance into warehouses” — indicators, the report said, “that corruption was suspect in these cases.”

Given the additional political scrutiny on the Pentagon in the aftermath of the Oct. 4 ambush in Niger that killed four Army Special Forces personnel, classifying vital metrics of progress in our 16-year-old Afghanistan campaign doesn’t cast the U.S. military in the best light. But you also don’t need those data points to see what even the commander-in-chief sees: The U.S. is losing in Afghanistan. According to SIGAR, the Taliban now controls 43% of the country’s districts, a 3% percent increase from six months ago. Last month, video captureda convoy of Taliban vehicles brazenly plowing through the country’s lawless Nimruz province in broad daylight. On the other side of the country in Kabul’s neighboring Logar province, the Taliban are far from worried about President Donald Trump’s coming Afghanistan troop surge.

“[Those] 150,000 Americans couldn’t beat us,” Mullah Abdul Saeed, the commander of a company of 150 Taliban fighters in Afghan government’s backyard, told the Guardian of the Obama administration’s 2009 troop surge in an Oct. 31 interview.. “The Americans were walking in our villages, and we pushed them out … It’s true, it has become harder to fight the Americans. But we use suicide bombers, and we will use more of them. If the US changes its tactics of fighting, so do we.”

Read the full SIGAR report below: