Is The US-Led Coalition Creeping Toward Outright War With Syria?

The U.S.-led coalition to defeat ISIS is dancing closer to an open conflict with forces aligned with the Syrian government.... 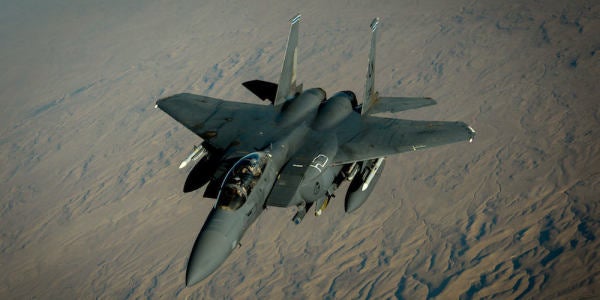 The U.S.-led coalition to defeat ISIS is dancing closer to an open conflict with forces aligned with the Syrian government.

On June 8, Operation Inherent Resolve once again carried out strikes against militias aligned with the Syrian regime, the second time in the past three days — and the third time in as many weeks — that coalition forces have bombarded pro-Assad elements.

The June 8 strikes targeted two technicals that appeared to threaten coalition troops stationed at the At Tanf garrison, a small base located near the Iraq-Syria border, according to OIR spokesman Col. Ryan S. Dillon. In announcing the strikes, Dillon reiterated that while OIR “does not seek to fight Syrian regime or pro-regime forces,” coalition forces “remain ready to defend ourselves against any threat.”

Today was the third set of kinetic strikes the U.S. conducted in response to threats posed to #Coalition forces operating out of At Tanf.

Coalition forces previously bombed a pro-regime convoy on May 18 after urging militants to stay away from the 55-kilometer deconfliction zone that surrounds the al-Tanf outpost. Another bombardment on June 6 destroyed two pro-regime militia artillery pieces and an anti-aircraft weapon. An OIR spokesman declared both incursions “unacceptable.”

The #Coalition does not seek to fight Syrian regime or pro-regime forces. However, we remain ready to defend ourselves against any threat.

But the June 8 strikes are different. Shortly after news of the strike broke, a coalition spokesman announced that a U.S. aircraft had downed an unmanned aerial vehicle, about the size of an MQ-1 Predator, operated by pro-Syrian regime forces that had reportedly fired upon coalition troops in the area.

According to OIR, the drone in question “dropped one of several weapons it was carrying near a position occupied by Coalition personnel who are training and advising partner ground forces in the fight against ISIS.”

Both incidents suggest the U.S. could soon find itself more deeply entwined in the war in Syria — an unbelievably complex conflict driven by regional and religious power struggles.

The coalition has expanded its footprint in Syria in recent months as the multinational campaign to destroy ISIS has gained traction, culminating with the crucial siege of Raqqa launched by the U.S.-backed Syrian Democratic Forces. As part of this effort, coalition forces established the deconfliction zone around al-Tanf, where U.S. and British special operations forces have trained Syrian fighters participating in anti-ISIS operations.

Despite its march deeper into Syria, the coalition attempted to clearly convey its intention to keep the area free of Syrian government troops and their allies, repeatedly emphasizing that the multinational force “does not seek to fight Syrian regime, Russian or pro-regime forces partnered with them.” U.S. planes even dropped leaflets in late May urging pro-Assad forces to stay away from the deconfliction zone.

But both Syria and its crucial ally, Iran, seem eager to test those warnings. As ISIS has steadily lost territory in the region, the chance of opening a direct supply line between Iraq and Syria appears too enticing to powerbrokers in Damascus and Tehran to pass up. To this end, pro-government militias have reportedly been dispatched to the area around the deconfliction zone, according to the Military Times. But dipping in and out of the area has proven deadly, triggering those coalition airstrikes today and on June 6 and May 18.

Taken together, these developments bring to mind a troubling question: How willing are Damascus and Tehran to test OIR forces in southern Syria? The coalition said June 8 that the garrison at al-Tanf “will not be vacated until ISIS is defeated.” It also reiterated its pledge to “take appropriate measures to protect” its forces. On face, this statement is clear enough: Here’s the line, don’t fucking cross it.

The U.S. is not actually at war with the Syrian government, which makes the ongoing situation even more strange. While U.S. cruise missiles targeted a Syrian air base back in April following a gruesome chemical attack in northern Syria, Washington has shown little appetite for a full-on war with Damascus, particularly since both countries have a common enemy in ISIS. Moreover, the outbreak of hostilities with Syrian government forces would almost certainly inhibit anti-ISIS operations at a time when U.S.-backed forces recently launched a crucial battle to retake the group’s so-called capital, Raqqa.

With that in mind, the recent incidents around al-Tanf bear close watching. The Coalition has made clear how it will respond, should Syria and Iran continue to press into the designated deconfliction zone. Ball’s in your court, Bashar.