Carter Page, a former naval officer and investment banker whom then-candidate Donald Trump identified during the 2016 campaign as one... 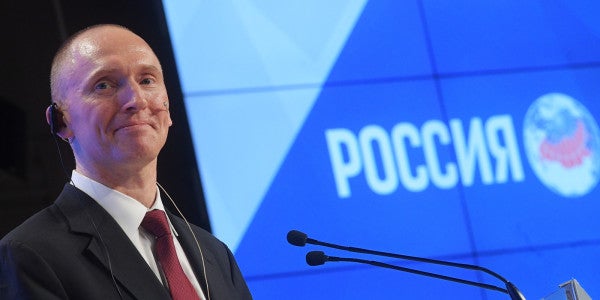 Carter Page, a former naval officer and investment banker whom then-candidate Donald Trump identified during the 2016 campaign as one of his foreign policy advisers, was under court-approved FBI surveillance last year as a suspected agent of the Russian government, the Washington Post reported April 11.

Page — a distinguished Annapolis graduate who served on active duty from 1993-1998 before moving to Russia to work in oil and natural gas consulting — already admitted last week that he’d “met with and passed documents to a Russian intelligence operative in New York City” three years ago, unwittingly.

But the Post now reports that Page’s Russian contacts were serious enough to convince a judge on the Foreign Intelligence Surveillance Court that the FBI and Justice Department should wiretap him last summer:

This is the clearest evidence so far that the FBI had reason to believe during the 2016 presidential campaign that a Trump campaign adviser was in touch with Russian agents. Such contacts are now at the center of an investigation into whether the campaign coordinated with the Russian government to swing the election in Trump’s favor.

As early as March 2016, Trump identified Page to interviewers as a member of his campaign’s foreign policy team:

Shortly after Trump secured the Republican Party’s presidential nomination, though, experts in foreign policy circles began to express concerns about Page’s pro-Russia rhetoric, saying he had “little real understanding about U.S.-Russia relations” and “may be compromised by his investment in Russian energy giant Gazprom,” which has long been controlled by Vladimir Putin’s Kremlin.

In 2013, three Russian spies currently on trial in New York City tried to recruit Page to provide them with documents about the energy industry. “He got hooked on Gazprom,” one of the spies told his boss, according to federal court filings. “It’s obvious that he wants to earn lots of money.”

Another spy called Page “an idiot” and an easy mark: “I also promised him a lot… This is intelligence method: to cheat, how else to work with foreigners? You promise a favor for a favor. You get the documents from him and tell him to go fuck himself.”

Page, who has not been charged with any crime, said he stepped away from Trump’s campaign in September 2016 “based on these lies” about his ties to Russia; on at least two occasions, he has also compared his case to FBI surveillance of Martin Luther King Jr. during the Civil Rights era. “This confirms all of my suspicions about unjustified, politically motivated government surveillance,” Page told the Post this week. “I have nothing to hide.”

Representatives of the president have distanced themselves from Page and downplayed his involvement in the Trump campaign. A U.S. intelligence official told Buzzfeed in early April that the federal Russia probe would question Page, and a lot more.

“There’s so many people that are more relevant,” the official said.