Former national security adviser Mike Flynn has told investigators that he’s willing to be interviewed as part of inquiries into... 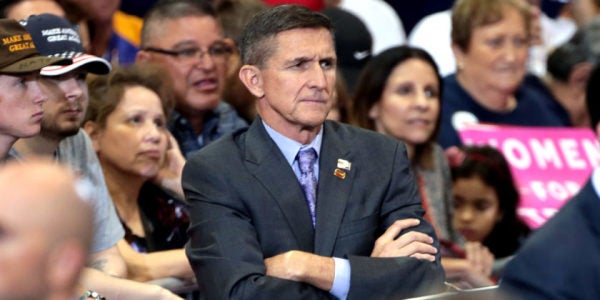 Former national security adviser Mike Flynn has told investigators that he’s willing to be interviewed as part of inquiries into alleged contacts between the Trump administration and the Russian government in return for immunity from prosecution.

“Gen. Flynn certainly has a story to tell, and he very much wants to tell it, should the circumstances permit,” Robert Kelner, a lawyer for Flynn, said in statement late Thursday. “We will not comment right now on the details of discussions between counsel for Gen. Flynn and the House and Senate intelligence committees, other than to confirm that those discussions have taken place.”

Flynn, a retired lieutenant general, was forced out of the Trump administration after it was revealed that he had misled Vice President Mike Pence about his contacts with the Russian ambassador to the U.S. after Donald Trump’s victory.

FBI Director James Comey has told Congress that the bureau’s probe “includes investigating the nature of any links between individuals associated with the Trump campaign and the Russian government and whether there was any coordination between the campaign and Russia’s efforts.”

The House and Senate intelligence committees are also investigating allegations of Russian interference in the 2016 U.S. election, including any contacts between Trump associates and Russia.

Flynn’s lawyer suggested immunity is justified because his client is “the target of unsubstantiated public demands by members of Congress and other political critics that he be criminally investigated.” Kelner, a partner at Covington and Burling LLP in Washington, said: “No reasonable person, who has the benefit of advice from counsel, would submit to questioning in such a highly politicized, witch-hunt environment without assurances against unfair prosecution.”

Jack Langer, a spokesman for the House Permanent Select Committee on Intelligence, said “Flynn has not offered to testify to HPSCI in exchange for immunity.”

Flynn, who ran the Defense Intelligence Agency under President Barack Obama, was one of Trump’s closest advisers during the campaign and briefly held one of the most sensitive jobs in the administration, which carries the highest-level security clearance. He has been at the top of the list for Democrats and others investigating the possible Russia connections.

In the weeks after Flynn left the administration, new details emerged about his business ties with Turkey’s government and Russian entities.

Flynn retroactively registered as a foreign agent with the Justice Department for work that his firm, Flynn Intel Group, did for a Dutch consulting company, Inovo BV, which has ties to President Recep Erdogan of Turkey. Flynn’s filing showed that his company received $530,000 from Inovo between Sept. 9 and Nov. 14.

Kelner wrote in a letter accompanying the filing that Flynn had previously registered with Congress under the Lobbying Disclosure Act, but made the new filing because the work could have been interpreted as benefiting the government of Turkey. Lobbying on behalf of a foreign government requires registration with the Justice Department.

The top Democrat and Republican on the House Oversight Committee are seeking documents related to Flynn’s security clearance applications and contacts and payments from Russian, Turkish and any other foreign sources including the Kremlin-backed media outlet RT, dating from Flynn’s 2014 retirement from the Defense Intelligence Agency to the present. They also want documents connected to Flynn’s vetting for the national security post, his work with a speaker’s bureau and any documentation that Flynn sought U.S. approvals for payments from foreign sources.

Democrats on the House committee last week released documents showing Flynn received more than $45,000 from RT for taking part in a December 2015 gala where he sat at President Vladimir Putin’s table.

Other documents showed that Flynn, who received $11,250 for a 2015 speaking engagement in Washington for Kaspersky Government Security Solutions, Inc., a U.S. subsidiary of a Russian cybersecurity firm; and an $11,250 payment from Volga-Dnepr Airlines.

Price Floyd, a spokesman for Flynn, said the retired lieutenant general “both informed and fully briefed” the Defense Intelligence Agency about his Russia trip beforehand and when he returned.