What’s With All These People Suddenly Trying To Breach Security At US Military Bases?

A Colorado man was arrested on April 3 after attempting to enter Peterson Air Force, home of U.S. Northern Command... 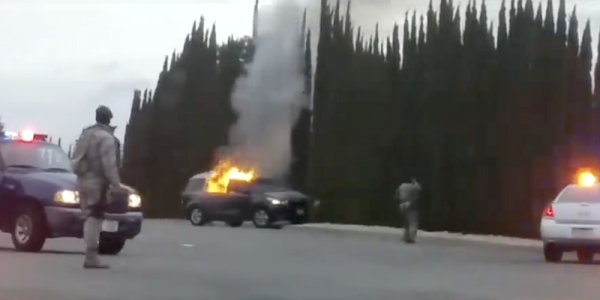 A Colorado man was arrested on April 3 after attempting to enter Peterson Air Force, home of U.S. Northern Command and NORAD, in what law enforcement officials characterized as a “minivan loaded with propane tanks” — the latest in a series of bizarre security incidents involving military installations across the United States in recent months.

El Paso County Sheriff’s Office spokeswoman Jacqueline Kirby told Air Force Times that the suspect in Tuesday’s incident barricaded himself inside his vehicle amid a “mental health crisis,” and that police did not identify any “explosive material” beyond propane tanks strapped to the van’s roof when the vehicle was stopped a half-mile away from Peterson AFB’s north gate.

But the incident came less than two weeks after 51-year-old Hafiz Kazi, a legal immigrant from India who has lived in the United States since 1993, drove a burning vehicle loaded with propane tanks and one-gallon containers of gas to the main gate of Travis Air Force Base in California. (The FBI told Task & Purpose that there was no evidence to suggest any connection to overseas terror groups.)

Related: No Evidence So Far That Burning Wreck At Travis Air Force Base Was A Terrorist Attack, FBI Says »

Indeed, several military installations across the continental U.S. have endured alarming threats or attacks of various intensity in recent months:

Including the Tuesday kerfuffle near Peterson AFB and the fiery crash at Travis AFB, that’s six alarming incidents in just over six weeks at CONUS military facilities. And while none of these examples appear connected to any sort of foreign terror, the frequency of such bizarre incidents may leave some service members (and their families) on edge.

It’s unclear at this point if the DoD has pursued any policy changes regarding these recent incursions. The last time NORTHCOM publicly altered its force protection condition for a non-specific threat was in May 2015.

When reached for comment by Task & Purpose, a NORTHCOM spokesman said he would examine existing guidances distributed by the command in recent months to see if military leaders had explicitly addressed the uptick in incidents.