You Were Never Really Here is, at its core, a movie about brute force. Joaquin Phoenix plays Joe, a former... 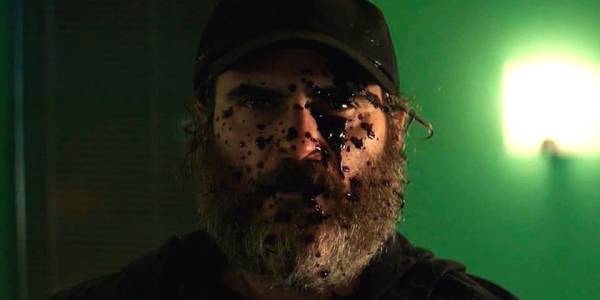 You Were Never Really Here is, at its core, a movie about brute force.

Joaquin Phoenix plays Joe, a former Marine who deployed to an undisclosed desert and became an FBI agent upon his return to the United States. Now a hired gun, Joe’s commissioned to retrieve the preteen daughter of a state senator from an underground sex ring, a mission that leads to a dark discovery and sends him into a tailspin of violence as he hammers his way through a child trafficking conspiracy. In You Were Never Really Here, justice isn’t blind — it’s a veteran armed with a ball-peen hammer.

The film isn’t really about Joe, though. The unspooling of his personal history resembles the suspense of horror movie, where a small glimpse of the macabre kicks the imagination into overdrive. His flashbacks feature what could be his deployment to Iraq or the horrible thing he found in the FBI; his mother drops hints of a failed relationship. You Were Never Really Here is about what happens to a sheepdog when his core identity revolves around his ability to save everyone but himself.

Joe’s problems are simultaneously relatable (transitioning from deployed military life is difficult!) and fantastical (most veterans do not become hired guns after they have exhausted government service). But despite this, the familiar foe of PTSD remains a core thread throughout the film: Joe is dissociated with those around him, on edge and imposing yet in a state of emotional pain that bubbles just beneath the surface. The only glimmers of humanity we see in Joe occur while he’s protecting innocent people or in the presence of his mother; other than these fleeting moments, he’s an outside observer to the events around him, struggling with his demons and the violence appears as a release valve for his inner turmoil.

There are outward scars to mirror his inner trauma. Joe’s body is shown to be covered in burn marks, scars from slashes, and bruises from blunt force trauma. The film opens with Joe taking a crowbar to the shoulder; his response to the crowbar is frightening, automatic, and without remorse, almost as jarring as the initial assault. And while there are moments of therapeutic release littered throughout the film, Joe’s attempts at self-care usually involve asphyxiation, a razor’s edge from suicidal. His only true moment of escape occurs in a silent vacuum, under a hot towel in what appears to be a sauna with what are hinted at to be fellow veterans.

You Were Never Really Here itself is a work of art. The anamorphic shots are beautiful and gritty. The scenes play out slowly, artfully and purposefully. The violence is usually hidden, but the result is not. At times the film becomes intensely cinematic and deliberate. The sound design is as elaborate as the cinematography. At times the soundtrack, which alternates between what is best described as a classical cacophony, and a sort of remixed version of the synth soundtrack of Top Gun, becomes indecipherable from the sound within the scene. Not to mention the tour de force that is Joaquin Phoenix. Nothing in this film is accidental.

Joaquin Phoenix in 'You Were Never Really Here'Amazon Studios

You Were Never Really Here is the Taxi Driver of the post 9/11 generation of veterans. Joe is not Travis Bickle, the 26-year-old Marine whose smoldering intensity Robert DeNiro so masterfully brought to life: In Taxi Driver, Sheepdog Bickle couldn’t seem to fit into society no matter how hard he tried, while Joe doesn’t seem to even want to bother. In the end, however, both found ways to show that they were uniquely talented to guard the society which considered them outsiders — a familiar feeling for many who serve overseas.

That's the beauty of the You Were Never Really Here: at no time does it feel like Joe freed himself from the horrible things he has seen or done. At the end of the day, much like Bickle, Joe is not whole or different. And his demons are not gone — they're just waiting for him around every corner.