You Can Now Watch These Military Movies And Shows On Netflix

Editor’s Note: This article by James Barber originally appeared on Military.com, the premier source of information for the military and... 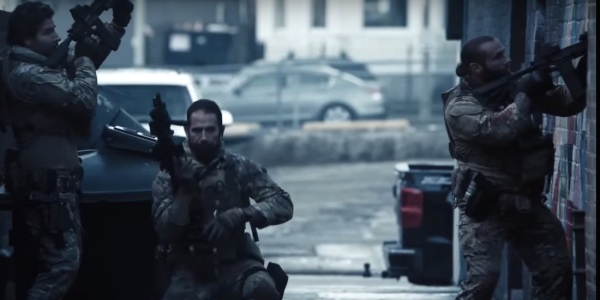 This 13-episode NBC series stars Anna Friel as Sgt. Odelle Ballard, an American special ops soldier who accidentally learns that al-Qaeda is being funded by an American corporation. While she’s on the run for her life, a corporate attorney and an Occupy-type activist learn the same secret. It’s kind of Homeland-Lite, but the show will scratch a conspiracy itch without occupying too much of your brain. (2015)

Marketed as a kids movie, “Small Soldiers” (directed by Joe Dante of “Gremlins” fame) is actually more like a PG-13 version of “Toy Story. When it was released, parents freaked out because a toy line from Hasbro and a Burger King promotion had promised a much different kind of movie. A defense contractor buys a toy company and a line of GI Joe-style toys become weaponized. (1998)

This Z-grade exploitation flick’s original title, “Navy Seals vs. Zombies” tells you everything you need to know. Put “American Sniper” and “The Walking Dead” in a blender and out comes one of those awesomely terrible movies you watch with a group of friends. It features “American Ninja” star Michael Dudikoff as SEAL Commander Sheer, former Los Angeles Laker Rick Fox as the vice president who must be rescued from the zombie menace and Olympic hurdler Lolo Jones as “Margaret.” So awful that it’s amazing. (2015)

Netflix has added the second series of AMC’s Revolutionary War drama. The show focuses on the intrigue and espionage that colonists used in their fight against the British. It’s a much more complicated view of the American Revolution than we got in our high school textbooks. (2015)

Ricky Gervais wrote, directed and stars in this Netflix exclusive movie about a radio reporting team (Gervais and Eric Bana) assigned to cover a war in Ecuador. They lose their plane tickets, money and passports and fake their reporting from an apartment in NYC. The satire of the news business and war correspondents is hilarious. The whole subplot about Gervais’ wife (Vera Farmiga) and her questionable efforts to raise ransom money after the journalists are “kidnapped” is not as funny.. (2016)

Marlon Brando stars in a WWII thriller also released as “The Saboteur” and Code Name Morituri.” He plays a German officer who’s disillusioned by the Nazis and goes AWOL to hide out in India. The British Secret Service figure out who he is and blackmail him into taking on a mission to sabotage a German merchant ship loaded with rubber, a scarce resource during the war. Yul Brynner plays the ship’s captain and there’s a lot of capital-A Acting. The movie was a stiff when originally released, perhaps because no one understood the title (which is Latin for “about to die”). “Morituri” is one of Brando’s least-seen movies. It also features Brando’s close friend Wally Cox, the bespectacled actor who’s best known for his appearances in the upper left square on Hollywood Squares. (1965)

Director Philip Kaufman made a true epic with this 3 1/4 hour movie that tells the story of the Navy, Marine and Air Force test pilots who established the United States space program. Covering the years 1947-1963, the film stars Scott Glenn, Ed Harris, Dennis Quaid, Fred Ward, Lance Henriksen, Scott Paulin and Charles Frank as the original Mercury Seven astronauts. Sam Shepard gives a notable performance as Chuck Yeager. This is one of those movies that stands up to repeated viewings. Don’t miss it. (1983)

More proof that the popular narratives about World War II barely scratch the surface. This documentary details the role of WWII veterans (many of them American) in the early days of Israel’s air force. The United States was technically neutral in those early days and men who aided the Israeli military risked prison back home. The filmmakers get in under the historical wire, since there are enough men still alive to tell a tale they wouldn’t have dared share publicly at the time. Bonus: Pee Wee Herman’s dad was one of the pilots and he shows up with his mom to talk about that legacy. (2015)

”War is hell, but peace is boring.” This satire about American troops in Germany just before the fall of the Berlin Wall got shelved after 9/11 and then barely got released a couple of years later. Joaquin Phoenix plays Specialist Ray Elwood, a bored soldier living the high life as a black marketeer with a side business cooking heroin. A new First Sergeant (played by Scott Glenn) screws up Elwood’s setup and everything blows up after a weapons deal gone wrong with Turkish drug dealers. If you’re looking for a break from reverential Hollywood movies that “respect the troops,” this over-the-top movie offers some black laughs about the less-than-noble side of military life. (2001)

Gene Hackman plays a retired Marine colonel whose son was listed as missing in action in Vietnam in 1972. He believes his kid is alive and being held in Laos and assembles a team of Vietnam vets that includes Fred Ward, Patrick Swayze and Randall “Tex” Cobb. Made at the height of the controversy over troops that we might have left behind in Southeast Asia, it’s a great example of a Reagan-era military movie. (1983)