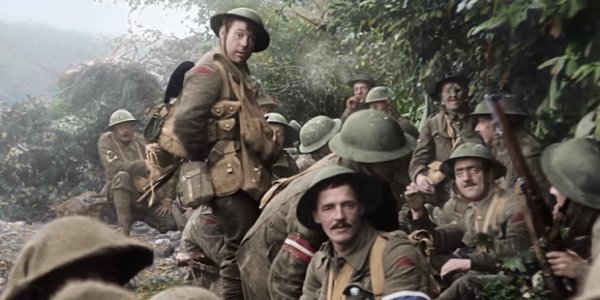 When it comes to war flicks and military shows, 2018 has been an interesting year.

There were some fun blockbusters, like Hunter Killer, which was essentially Olympus Has Fallen on a submarine, and The Predator, Shane Black's campy but entertaining sci-fi horror flick, which feels like what you'd get if TheDirty Dozen met the man-hunting alien from the original Predator.

The star-studded Afghanistan War drama 12 Strong wasn't bad, but felt out of touch with today's outlook on the 17-year-old war it depicts, as Adam Linehan noted in his review for Task & Purpose. Then there were the numerous cable television series, like the second season History's SEAL Team drama, SIX, which delivered on the dark tone its fans have come to expect.

All that said, the biggest standouts for shows and movies weren't major motion pictures or network military dramas. Instead, they were largely documentaries and a few non-military shows where the character's service was critical to their identity, but not the sum of it.

The Netflix documentary series debuted on Veterans Day and chronicles the extraordinary lives and deeds of eight service members awarded the nation's highest commendation for valor, as Task & Purpose noted earlier this year. The series features interviews with family members, brothers in arms, and some of the recipients themselves. It also uses a mix of historical footage and reenactments to recreate the events for which they were awarded. The result is that each episode offers a deeply personal account of heroism, courage, and sacrifice — that of the recipient of the award and of the men they fought alongside.

They Shall Not Grow Old

The newly released documentary by Academy Award-winning director Peter Jackson (Lord of the Rings) offers a stunning look at World War I. The project was four years in the making and was pieced together from more than 600 hours of black and white silent footage, which was then painstakingly colorized and restored. It was set alongside audio culled from more than 100 hours of interviews with actual veterans of the First World War, who serve as narrators throughout the movie. Perhaps the greatest takeaway from the feature length film is that the equipment and tactics may change, but the day-to-day of military life and the brutalities of front-line combat remain the same, which Task & Purpose reported on previously.

Originally, They Shall Not Grow Old received a limited release in the United States, screening in select theaters on Dec. 17 and Dec. 27. However, due to the film's massive success, it will be returning to select theaters beginning Jan. 11, 2019, with additional markets expected to open by February.

So if you missed it earlier this year, you'll have another chance to check it out in 2019 — and you definitely should.

A political thriller set in the United Kingdom, the BBC hit series arrived on Netflix earlier this year and follows David Budd (Richard Madden), an Afghanistan war veteran and a member of the Royalty and Specialist Protection Branch of London's Metropolitan Police Service. Budd is assigned to the home secretary's security detail, who in the series happens to be one of the politicians who advocated aggressively for the UK's involvement in Afghanistan, a conflict Budd served and suffered in. Though Bodyguard is a political thriller, it's Budd's character — and how he does (and doesn't) deal with his experiences downrange, as well as the stigma he knows he'll face if he's honest about them — that makes the series worth watching, especially if you're looking for a complicated protagonist who's more than a walking advertisement for tactical pants, operator hats, and beard oil.

This HBO comedy series Bill Hader as Barry Berkman, a Marine veteran-turned hit-man who's grown tired of a life of contract killing and wants to start fresh, so he decides to take up acting while on “assignment” in Los Angeles…

Okay, look, we know what you're thinking, but give Barry a shot. It's worth it.

The series includes a broad cast of veteran characters, or more accurately, self-aware caricatures. As Task & Purpose's Pat Baker pointed out, there's the hyper masculine “17-HD pill-popping, coke-snorting, sex-obsessed extreme vet.” Then there's the “self-proclaimed POG who has a healthy life balance with a beautiful family,” but who still enjoys hanging out with the guys because it brings him back to his Marine days. Its a relatable sentiment that's captured perfectly when they all meet up and speak in nothing but an endless string of f-bombs.

The series is riddled with dark comedic moments, and bullet holes, but it's the subtle head-nods to military culture that make it a noteworthy, like how Barry's handler (Stephen Root), is a POG on a power trip who constantly tries to one-up the former Marine grunt by telling stories from his time as an Army cook who served stateside during 'Nam.

To put it bluntly, Combat Obscura shows the War in Afghanistan the way it felt for many who served there: It's dark, chaotic, raises many questions, provides few answers, and assaults the viewer with moments of hilarity and sheer terror. One moment the Marines on screen crack jokes and take bong rips from a Pringles can, and in the next they rush a grievously wounded friend to casevac helicopter.

The controversial and jarring war documentary was made by Miles Lagoze, a former Marine combat cameraman who used footage from his 2011 deployment to Afghanistan to craft a non-narrative film that offers an unfiltered perspective of the war, as Task & Purpose reported in April. Currently, Combat Obscura is only being shown at select film festivals. However updates on where it'll premier next will be announced on the documentary's website.