Ben Affleck will star and direct "Ghost Army" a new World War II movie about the artists and engineers who pulled off one of the greatest acts of deception in military history. 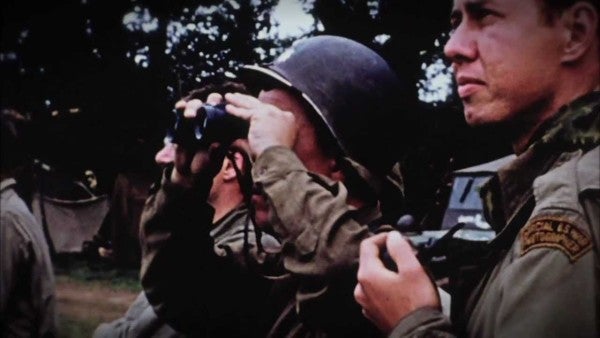 Ben Affleck is gearing up to direct and star in Ghost Army, a new World War II movie about a secret U.S. Army unit made up of artists, actors, advertising agents, and engineers who had one mission: to dupe Hitler.

And that's exactly what they did.

Based on the historical non-fiction The Ghost Army of World War II by Rick Beyer and Elizabeth Sayles (and Beyer's 2013 documentary of the same name), the drama will tell the story of the 23rd Headquarters Special Troops, an unconventional unit comprised of artists, performers, and other creatives recruited out of ad agencies and art schools who were charged with deceiving Nazi forces across Europe.

They were soldiers, sure, but their preferred weapon wasn't a rifle — it was an abundance of imagination.

The 1,100-strong unit created inflatable tanks, trucks, artillery, and rubber planes, according to a May 22, 2013 review of Beyer's documentary in The Atlantic. They hooked loudspeakers to the back of military trucks and blasted pre-recorded soundtracks of tanks rumbling by and men-at-work, cussing and swearing. Radio messages were sent back and forth between members of the Ghost Army, discussing troop movements and units — all an elaborate ruse, with German code-crackers in mind, and designed to spread disinformation.

An inflatable tank, one of many used by the Ghost Army to dupe Axis forces into thinking the Allies had a far larger force than actually existed.(National Archives via The Atlantic)

For the Axis forces, it was as if whole units had sprung up over night. The outcome: Utter chaos and confusion for the observers, spies, and intelligence officers tasked with tracking the Allies movements.

Between 1944 and 1945, the Ghost Army staged more than 20 deceptions, according to The Atlantic. They moved massive formations of fake tanks, and phony armor across Europe, with some real vehicles tossed in for good measure, like some kind of olive-drab traveling circus.

An inflatable plane created by the Ghost Army. National Archives photo via The Atlantic

Though the film's production date is still up in the air, Affleck is expected to have a hand in writing the screenplay, and the latest iteration of the script was drafted by Nic Pizzolatto (HBO's True Detective), according to Variety.

With any luck, Affleck's Ghost Army will be a film that highlights the courage, imagination, and ballsy bravado of those soldiers who helped push back the Nazi regime and saved the lives of untold numbers of their fellow soldiers with little more than some inflatable tanks and a whole lot of paint.

SEE ALSO: The Guys Who Brought Us 'Saving Private Ryan' And 'Jarhead' Are Making A Wwi Movie