Five women were recorded by the two cameras, "one of them multiple times." 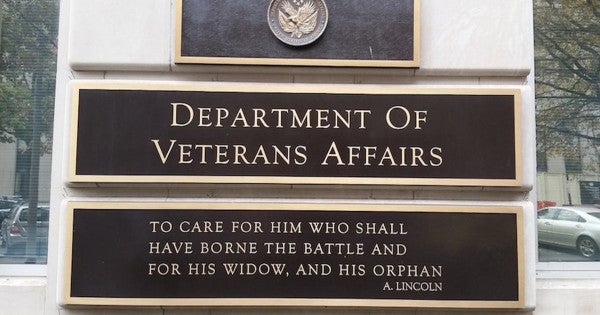 A Department of Veterans affairs employee allegedly placing cameras in the women's restroom of a VA office in Washington, D.C., NBC News reported on Thursday.

Alex Greenlee, 24, was charged on Wednesday with five counts of misdemeanor voyeurism for allegedly planting the pair of “micro-cameras” that were found in the restroom in January 2019, according to court documents obtained by NBC News.

The court documents reportedly state that agents with the Federal Protective Service were called to the VA office on Jan. 25 after a woman discovered a small camera in a neighboring bathroom stall, Washington's WJLA reports.

According to her affidavit, the unnamed woman's discovery of the camera was immediately followed by a series of suspicious interactions with Greenlee, per NBC News:

The woman told investigators that she saw [Greenlee] outside the restroom on his cellphone and that he asked whether she was OK and whether he could go in the restroom to get paper towels.

According to an affidavit filed in support of the arrest, the woman said that just an hour earlier, she'd seen Greenlee leave the same restroom on the 12th floor and that when she asked him why he was inside the women's restroom, Greenlee responded that there were no paper towels in the men's restroom.

Another woman located a second camera a few days days later “attached to the underside of a toilet,” per WJLA; the memory cards indicated that five women were recorded by the two cameras, “one of them multiple times.”

When interviewed by investigators, Greenlee reportedly denied any knowledge of the cameras, even though the cameras and memory cards yielded evidence that indicated he had placed them in the bathroom.

Greenlee is due back in court on June 25. If convicted, he faces up to a year in prison and a $2,500 fine if convicted.

SEE ALSO: A VA Worker Survived A Shooting At His Hospital. Now He's Stuck In A 'Bizarre' Maze Of Federal Workers' Comp Claims