The Navy is investigating reports that a female Marine discovered a hidden camera in one of the women's restrooms aboard the USS Arlington, an amphibious transport dock that's currently on at port in Greece. 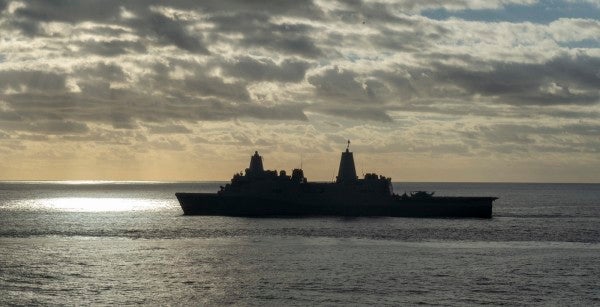 The Navy is investigating reports that a female Marine discovered a hidden camera in one of the women’s restrooms aboard the USS Arlington, an amphibious transport dock that’s currently on at port in Greece, NBC News originally reported.

The Naval Criminal Investigative Service (NCIS) is looking into “a recording device in the head” according to NBC News. The Marine found the device in March, which is able to “record images,” but military officials who spoke with NBC stopped short of specifying whether it could record still photos or video.

The NCIS investigation was launched after the device was first reported. The Arlington was docked in Greece on Friday, after being deployed from the East Coast in December along with the “USS Kearsage, USS Fort McHenry and the 22nd Marine Expeditionary Unit as part of an amphibious ready group operating in the 5th and 6th Fleet theaters,” according to Stars and Stripes.

“The command has taken, and will continue to take, all necessary actions to ensure the safety and privacy of the victim,” Cdr. Kyle Raines, a Navy spokesman told NBC News. “The Navy/Marine Corps team takes all reports of sexual harassment seriously, and are committed to thoroughly investigating these allegations and providing resources and care to victims of sexual harassment.”

“To protect the legal rights and the privacy of all involved, we cannot release details, names or any other identifying information at this time,” Raines said.

While this investigation is still under way, it is reminiscent of another incident when a ring of U.S. Navy sailors aboard the ballistic submarine the USS Wyoming were revealed to have secretly filmed female sailors undressing or showering over a 10 month period. The scandal came to light in 2014, and led to a sprawling investigation, and eroded trust aboard the USS Wyoming’s crew, and the submarine fleet at large, Navy Times reported in December 2015.

WATCH NEXT: First came the explosion. Then, the cover-up

SEE ALSO: A Navy SEAL Is Accused Of Committing War Crimes In Iraq