Disgraced Missouri Gov. Eric Greitens is returning to the Navy, but he won’t be a SEAL again

Former Navy SEAL Eric Greitens, who resigned as governor of Missouri last year in disgrace, is putting his uniform back on — just not as a Navy SEAL 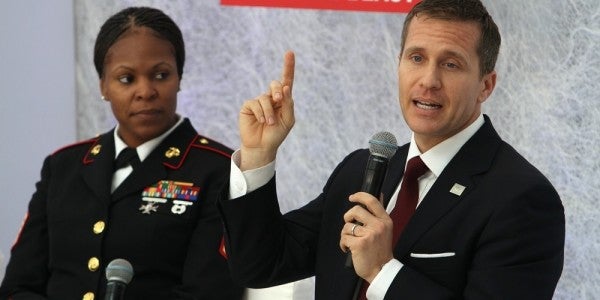 Eric Greitens, right, explains to the audience at the Hero Summit in Washington, D.C., Nov. 15, 2012, how he was motivated to join the military after graduating from Oxford University. (DoD photo by Claudette Roulo/Released).
SHARE

Former Navy SEAL Eric Greitens, who resigned in disgrace as governor of Missouri last year, is putting his uniform back on — just not as a Navy SEAL.

Greitens, who stepped down in May 2018 amid criminal charges related to an alleged extramarital affair, has become a reserve naval officer with Navy Operational Support Center — St. Louis, a spokeswoman for Navy Recruiting Command confirmed to Task & Purpose. The Kansas City Star first reported the news.

“In April 2019, Eric Greitens, a in the Individual Ready Reserve, requested to transfer his status to the Selected Reserves as a general unrestricted line officer (designator 1105) and his transfer was approved,” Navy Lt. Cmdr. Jessica McNulty said in an email.

McNulty declined to comment on why the Navy allowed him to transfer to the Selected Reserves.

The former governor had reportedly told his friends and supporters that he expects to deploy to the Middle East this fall, but it is unclear as of Thursday whether he is actually heading downrange.

“I cannot confirm that he has orders,” Cmdr. Doug Gabos, a spokesman for Navy Reserve Force, told Task & Purpose.

Gabos also could not say what Greitens’ current role is at Navy Operational Support Center – St. Louis, other than he is administratively assigned there.

Attempts to reach Greitens on Thursday were unsuccessful.

Greitens resigned as Missouri’s governor amid allegations that he had sexually assaulted a woman and threatened to release a nude photo he took of her in order to keep her silent.

A charge of invasion of privacy stemming from the incident and a separate charge of felony computer-tampering for allegedly stealing the donor list of a charity to which he belonged were both eventually dropped.

News about Greitens returning to the Navy comes amid a slew of revelations about how poorly women in general and female sailors in particular are treated by their male counterparts.

The Navy also launched an investigation after a female Marine found a hidden camera in one of the women’s restrooms aboard the amphibious transport dock USS Arlington.

“The Navy had a choice whether to allow an accused sex offender and disgraced former politician to join the fleet,” said retired Air Force Col. Don Christensen, president of the advocacy group Protect Our Defenders. “Allowing him to return to the active Navy sends a disturbing message that the Navy does not believe survivors.”

“This is especially repulsive on the heels of the dramatic increase in military sexual assaults last year,” Christensen added. “From Tailhook to Fat Leonard to the recent submarine ‘rape list’ the Navy has repeatedly proven it just doesn’t get it.”

WATCH NEXT: The Navy SEAL Charged With War Crimes In Iraq