Saboteur or fall guy? Inside the Navy case against sailor accused of torching the USS Bonhomme Richard

“Because people don’t like you doesn’t mean you did what the government has accused him of,” the sailor's lawyer said. “In fact, it makes you a target.” 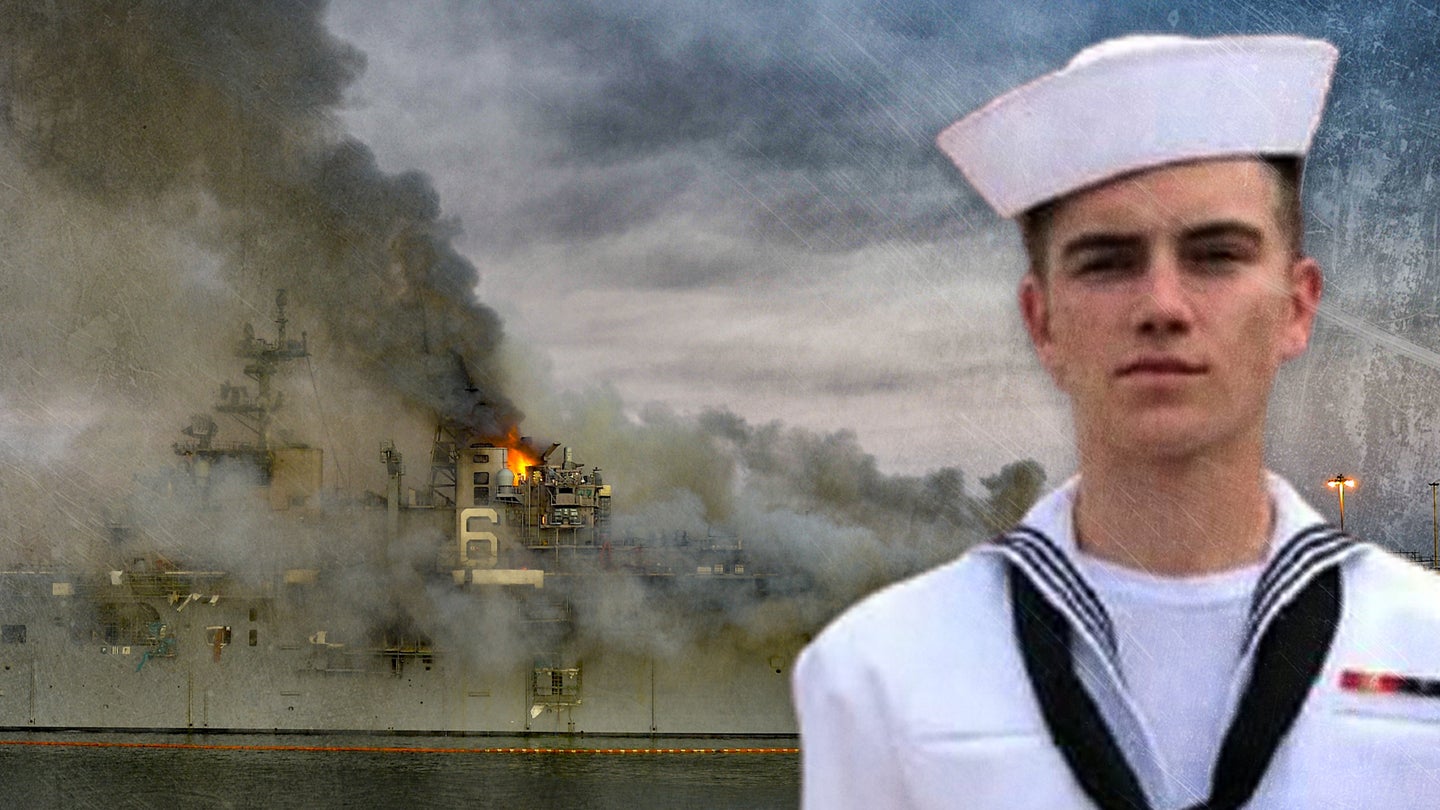 Was Seaman Apprentice Ryan S. Mays cocky? “Sure,” his defense lawyer, Gary Barthel said Wednesday. “Was he arrogant? Sure.”

Did he intentionally set the fire that ultimately destroyed a billion-dollar U.S. Navy ship?

“Because people don’t like you doesn’t mean you did what the government has accused him of,” Barthel said. “In fact, it makes you a target.”

Barthel’s remarks to the hearing officer closed the three-day preliminary Article 32 hearing to see if prosecutors have enough evidence to go forward with the court-martial of Mays, who is charged with hazarding a ship and aggravated arson for allegedly setting a fire on the USS Bonhomme Richard July 12, 2020. The fire burned for almost five days and left 63 people who fought the fire injured.

Prosecutors must first prove that the fire was arson, and that job got tougher after defense witnesses testified that the arson team missed at least two critical potential electrical sources of the fire: lithium-ion batteries and an electrical wire that showed evidence of arcing.

Defense lawyers contend that the two federal agencies that investigated, the Bureau of Alcohol, Tobacco, Firearms and Explosives (BATFE) along with Naval Criminal Investigative Service made up their minds that arson caused the destruction of the ship, now scrapped, before the expert arson team was done sifting through the char. Testimony shows that by July 17th, NCIS had called the burned ship an active crime scene despite an ATF team processing evidence until the 27th and not completing its origin of fire report until January 2021.

Prosecutors say they have plenty of evidence: an eyewitness who saw Mays heading into the lower vehicle storage deck where the fire originated, the final report by the ATF’s National Response Team, and even Mays’ own stunned mutterings when he was taken into custody after his second interview.

They acknowledge that their eyewitness has changed his story numerous times since the fire, and did not think Mays was the suspect until a week later. And there is little physical evidence tying Mays to the fire — no DNA, fingerprints, or video — aside from Mays having a lighter in his possession.

But on Tuesday, Petty Officer 2nd Class Kenji Velasco said under oath that he was now “100 percent sure” the male figure he saw walk past him on the upper vehicle storage deck where he stood watch was Mays. The figure wore boot camp coveralls, a black mask, and hair cover, and carried a heavy bucket down the ramp to the lower vehicle storage deck, he said.

The day the fire began, with explosions and chaos causing evacuations, Velasco didn’t mention seeing someone go down the ramp. But he told his supervisor the following day about the then-unidentified man who went to the lower deck minutes before the first reports of smoke. His supervisor told him to talk to NCIS.

That night or soon after, Velasco sat with three other sailors in Navy housing talking about the fire, according to Petty Officer 2nd Class Matthew Betz, who testified Wednesday.

“I am the one who put Seaman Mays’ name in Velasco’s head,” Betz told NCIS investigators and the hearing officer. “I said it sounded like Mays mainly because the boot camp coveralls spoke out to me.”

Betz testified that Velasco didn’t like Mays, who was 19 when the ship burned, and found him to be “selfish, whiny and mad.” Velasco hadn’t been able to identify the man who walked past him until then.

Like the others, Betz didn’t like Mays, who’d dropped out of the Basic Underwater Demolition/SEAL training and ended up working deck duty on the Bonhomme Richard. Mays exaggerated both his time and accomplishments at BUD/S, according to testimony, and loathed the cleaning and maintenance work that is the heart of deck duty.

NCIS investigators noted Mays’ exaggerations and arrogance in an August 2020 interview, where he continued to deny any role in the fire. At the end of the interview, they handed him off to be escorted to the brig without telling him where he was headed.

Mays only realized he was going into custody when his escorts took him for the pre-detention physical and he asked why he was getting one, according to Master-at-Arms First Class Carissa Tubman.

“He looked kind of baffled and confused,” she testified. “He started to mumble under his breath.”

Tubman testified she heard him say, “I’m guilty, I guess. I did it,” and then after some mumbling, Mays added, “it had to be done.”

Her recollection had changed from what she told NCIS more than a year earlier, which had more nuanced parsing and didn’t include ‘It had to be done,’ she conceded during cross examination.

But what she testified she overheard is one of the three key parts of the Navy’s case, according to Cmdr Richard Federico, who summed up the prosecution Wednesday. Velasco’s statement that he saw Mays head into the Lower V is the second.

The third is the ATF report that concluded the fire was deliberately started on the lower deck, and identified the area it originated as a spot near the starboard bulkhead that showed more intense scarring than the rest of the deck. The ATF concluded that the fire was set using an accelerant they believe was either mineral spirits or diesel fuel poured on tri-walls, thick cardboard boxes built atop wood pallets. Though the agency had a dozen or more fire experts and engineers processing the scene for nine days, they were unable to find any DNA, fingerprints or other physical evidence tying Mays to the fire. They were unable to find or identify the accelerant, according to testimony, and relied on tests where they burned tri-walls to decide that an accelerant was used.

Thoresen said he found evidence that a copper wire in a forklift next to the fire zone had arced and could have started a fire. He also found lithium-ion batteries in buckets of charred waste the ATF team left behind. The ATF report indicates that there was no evidence of electrical sparking from the two forklifts and that the batteries were examined on scene and ruled out, despite evidence that several were ‘blown out.’

“You can’t tell if the battery failed by looking at it. You have to x-ray it and look at the interior structure to see if it failed,” Thoresen testified. The ATF didn’t do that, according to ATF testimony and reports.

Increasingly, the electrical fires involving lithium batteries happen when they’re not being charged, he said. If there is more than one battery, the blast of fiery lithium from a failed battery will start a fire that can cause some of the nearby batteries to also blow up.

While he couldn’t say for certain that the fire started from the lithium batteries or the engine arcing — both considered accidental ignition — Thoresen said he could not rule them out as fire starters.

That’s important, according to former ATF fire inspector Fouts, who is an instructor in fire investigation for the agency. Much of fire investigation involves ruling things out using science and testing, and then building theory from what’s left.

“We are not alleging he cut the hoses,” Federico said in closing. “We’re alleging he hazarded the vessel.”

The hearing officer must now decide whether or not there’s enough evidence to proceed to court martial, and it’s clear from her questions there won’t be a ruling before January.

For all the ambiguous observations and technical arguments, one witness was absolutely sure about his experience the day the fire started. Seaman Edwin Kongo said he was just waking up after 8 am in one of the berthing areas of the ship when Mays came in wearing his camouflage uniform, not coveralls.

“He just came in and told us we have to get out,” Kongo testified. “I opened the door and there was a lot of smoke. I could barely see.”

“I went to thank him because he saved my life,” Kongo said.