Dropping F-Bombs At The Gym Only Makes You Stronger, According To Science

Have you ever been in the middle of a squat, with the weight of the world — or two barbells... 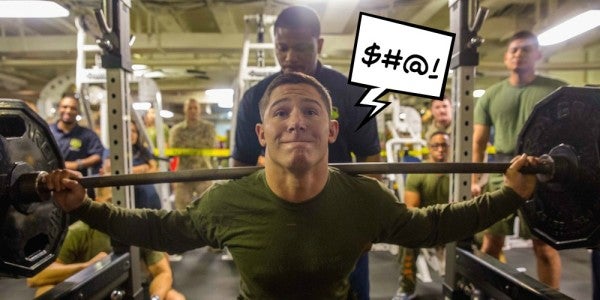 Have you ever been in the middle of a squat, with the weight of the world — or two barbells — on your shoulders and, as you extend, the word “fuck” falls out of your mouth, miraculously giving you just enough strength to finish your rep?

It turns out that swearing actually helps you exert more physical power, according to a very new, very convincing study by psychologist Richard Stephens from the UK’s Keele University.

Here’s how this study went down: Stephens selected 29 people aged around the age of 21 for a cycling test and 52 19-year-olds for a hand-grip test. Each one selected a swear word to repeat — an expletive they might yell if they hurt themselves, for example — in addition to neutral word. “We asked them to repeat the word throughout each test,” Stephens said. “They don’t scream and shout it. They repeated it in an even tone.”

The study, a damn good idea, was based on previous research by Stephens, wherein he found that swear words upped his subjects’ pain tolerance. From the Guardian:

The findings may not come as a surprise to those who have let rip with profanities to spur themselves on. Stephens recalls a friend of his, Mark Foulkes, who in 2013 took part in a tandem bike ride from Reading to Barcelona to raise money for a mobile chemotherapy unit. “Swearing was a prominent feature of them powering up the Pyrenees,” Stephens said.

In the latest study, people’s heart rates did not rise any more when they swore, a finding that suggests the expletives were not triggering the so-called fight-or-flight response. “Quite why it is that swearing has these effects on strength and pain tolerance remains to be discovered,” Stephens said.

Stephens doesn’t know exactly what causes the increase in strength. ““We’re not telling people something they don’t already know, but we’re verifying that in a systematic and objective way,” he told The Guardian. “I think people instinctively reach for swearwords when they hurt themselves and when they’re looking for an extra boost in performance.”

But if it works for you, fuck it. As Stephens himself wrote: “We have yet to understand the power of swearing fully.”