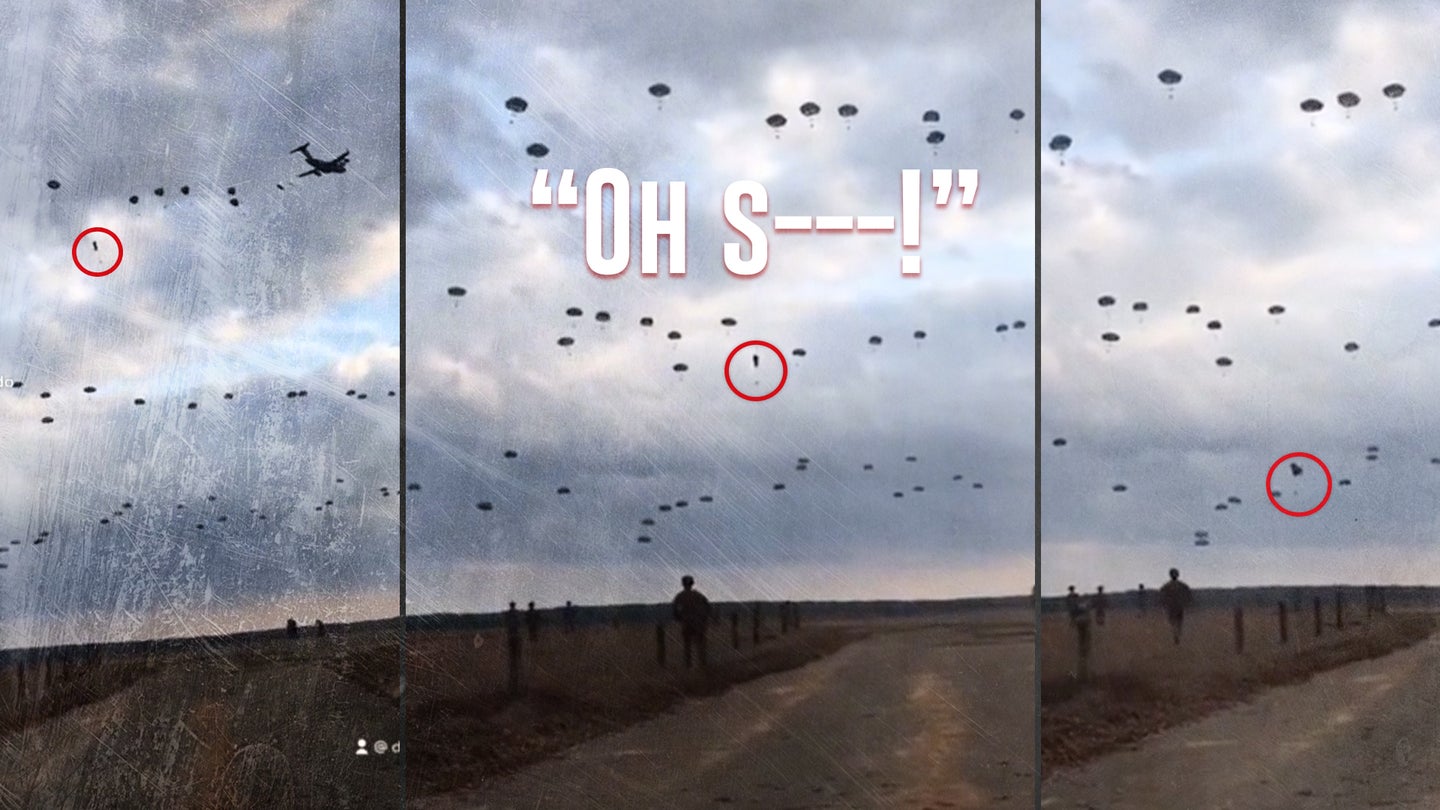 A video that’s recently gone viral shows what appears to be a U.S. Army paratrooper plummeting toward the earth under a partially deployed parachute during an otherwise routine jump.

The short clip, posted to TikTok on Dec. 1, seems to show a standard airborne jump from what looks like a C-17 aircraft made during daytime. The jump appears to have been made without combat equipment, given that the dots of paratroopers scattered across the sky don’t seem to have rucksacks or additional gear strapped to them. As the aircraft recedes into the distance, the paratroopers fall under the deployed square-shaped canopies of their T-11 advanced tactical parachute systems and lazily drift to the earth at roughly 19 feet per second. That is, all but one.

Immediately after the 33-second clip begins, one of the paratroopers starts picking up speed and begins falling faster than the other jumpers. The soldier’s chute, unlike the others dotting the sky, looks like a deflated balloon. As the paratrooper in the video plummets toward the ground, the moment is perfectly summed up by someone offscreen: “Oh shit!”

Fortunately, as the jumper reaches the halfway mark to the horizon, they appear to pull their reserve chute and the speed of their descent immediately slows. The video ends shortly after, but the assumption is that they made it safely to the earth, although there’s a good chance their joints were worse for wear after the landing.

The video brings to mind an airborne joke I recently heard: If your parachute doesn’t open, you’ll have the rest of your life to figure it out. Until recently, I just assumed it was a great example of the Army airborne community’s special brand of gallows humor — after all, this is a group whose theme song is about a rookie trooper who dies on a jump that is referred to as a “hell of a way to die!”

But it’s become clear that there’s actually a kernel of wisdom tucked away in that quip: As you’re plummeting toward the earth, you have until you reach the ground to figure out a solution.

“We train every single time to a meticulous level of detail with these paratroopers to make sure that they do the right thing, every single time,” said Master Sgt. Alex Burnett, a spokesman with the 82nd Airborne at Fort Bragg, North Carolina.

Though it’s unclear which unit took part in the jump, Burnett said the scenery in the video looks similar to the Sicily Drop Zone used by paratroopers at Fort Bragg, but it’s difficult to say for certain.

As for the soldier in the video, “this kid did all the right things,” said Burnett, who’s served in the Airborne for the past six years and has jumped 43 times. “When he realized he was falling faster and acknowledges what’s going on, he did exactly what he was trained to do: He activated that reserve and made sure he landed to the ground safely.”

The reason this happened the way it did, Burnett said, was because every soldier, prior to conducting a jump, goes through sustained airborne training where they cover every facet of the operation “from start to finish.” This is on top of the training paratroopers already receive during the Army’s three-week Basic Airborne Course at Fort Benning, Georgia.

“Sustained airborne training starts with what’s called pre-jump. The first part of pre-jump is literally going through what we call the five points of performance,” which covers, in excruciating joint-aching detail, every movement paratroopers make from the moment they exit the aircraft until they land, Burnett said.

Typically, after jumping from a perfectly good airplane — and snapping into a tight body position with their chin on their chest, elbows tight by their sides, bent at the waist and with their eyes open — they’ll begin to count: one-thousand, two-thousand, three-thousand, until they get to “six-thousand,” at which point the paratrooper will look up to check their canopy.

“That’s when the paratrooper looks up and makes sure that his canopy is completely deployed,” he added. “Once the canopy’s open, obviously there’s an element of situational awareness that comes with that.”

As paratroopers drift through the air in what Burnett called that “wonderful headspace of ‘thank God I’m alive and thank God my chute is open,’” they’ll take stock of their surroundings and run through a few boxes on their checklist, like ensuring that they’re not about to bump into someone or land on top of them — while the T-11s don’t allow paratroopers to steer, they can make small course corrections. Then, assuming all goes well, they’ll continue to slowly drift to the earth before landing “as eloquently as only a paratrooper can,” Burnett said. Which is a nice way of saying: Like dropping a sack of potatoes.

But, in the event that their parachute doesn’t fully deploy — as was the case for the paratrooper in the video — they train for that, too.

“I’m guessing when he looked up, what he saw was a parachute that looked like it might have been somewhat inflated, but not entirely,” Burnett said.

What likely happened next — though it’s hard to say definitively — is that the paratrooper saw that his chute was partially inflated, then looked to his left and right and realized that he was dropping faster than everyone else, “and finally thought ‘oh, pop my reserve,’ and obviously then he lands safely on the ground,” Burnett said.

The T-11 reserve is mounted on the front of the jumper and is essentially a smaller round canopy, but unlike the main parachute, it’s spring loaded. This means that when a paratrooper grabs the “red ripcord handle of the T-11 reserve, pull on it and drop it, that spring launches the canopy out and gives it its best chance to catch air at any altitude,” Burnett said.

“That’s exactly what happened to me back in August. I miss-stepped when I exited the aircraft and began tumbling in the air as I came out, so my canopy was twisted up. I saw that I was falling very very fast, so I immediately activated my reserve and ‘boom’ it caught air and I landed safely.”

Though it’s designed as a last-ditch measure, the T-11 reserve is there to be used when needed, Burnett said, which is why units routinely run what’s called a T-11 reserve pull-off demonstration. During the demo, a paratrooper from the Advanced Airborne School at Fort Bragg walks the jumpers through how to activate the reserve, step-by-step, and how it works: from where to place your hands so that they don’t interfere with the spring-loaded chute as it launches outward; to what it will sound like when it fully deploys — like ripping Velcro as the risers are removed from the pack tray.

“They go into an incredible amount of depth to make sure that every paratrooper is comfortable and understands how the reserve works,” he said.

Though it may not be routine to have to pull a reserve parachute, it does happen.

After watching the video, a paratrooper with the 18th Airborne Corps, who spoke to Task & Purpose on condition of anonymity since he was not authorized to speak to reporters, said that the soldier in the clip might have waited just a little too long to pull his T-11 reserve.

“We are told to immediately compare our rate of descent to our fellow jumpers,” he said. “When he exited the aircraft and his chute was pulled it should have been clear right away his chute malfunctioned and he should have pulled his reserve.”

This critique was echoed by another soldier in the video, who can be heard loudly exclaiming “Reserve, dumbass!” as the soldier falls toward the ground.

In the end, everything seemed to have worked out fine for the paratrooper, and while it may seem common knowledge — to the point of muscle memory — for paratroopers to know when to pull their reserve, there’s an undeniable pucker factor that comes with plummeting to the earth in near-freefall.

“I’ll speak for myself personally, if I looked up and I saw my chute not open, for me on a scale of 1-10 I would say that is definitely a nine, as far as ‘oh man, I’m scared,’” Burnett said. “I wouldn’t say it’s something that happens every single jump, but when it does happen it’s just good to know that they know what they’re doing.”

And clearly, that paratrooper did.