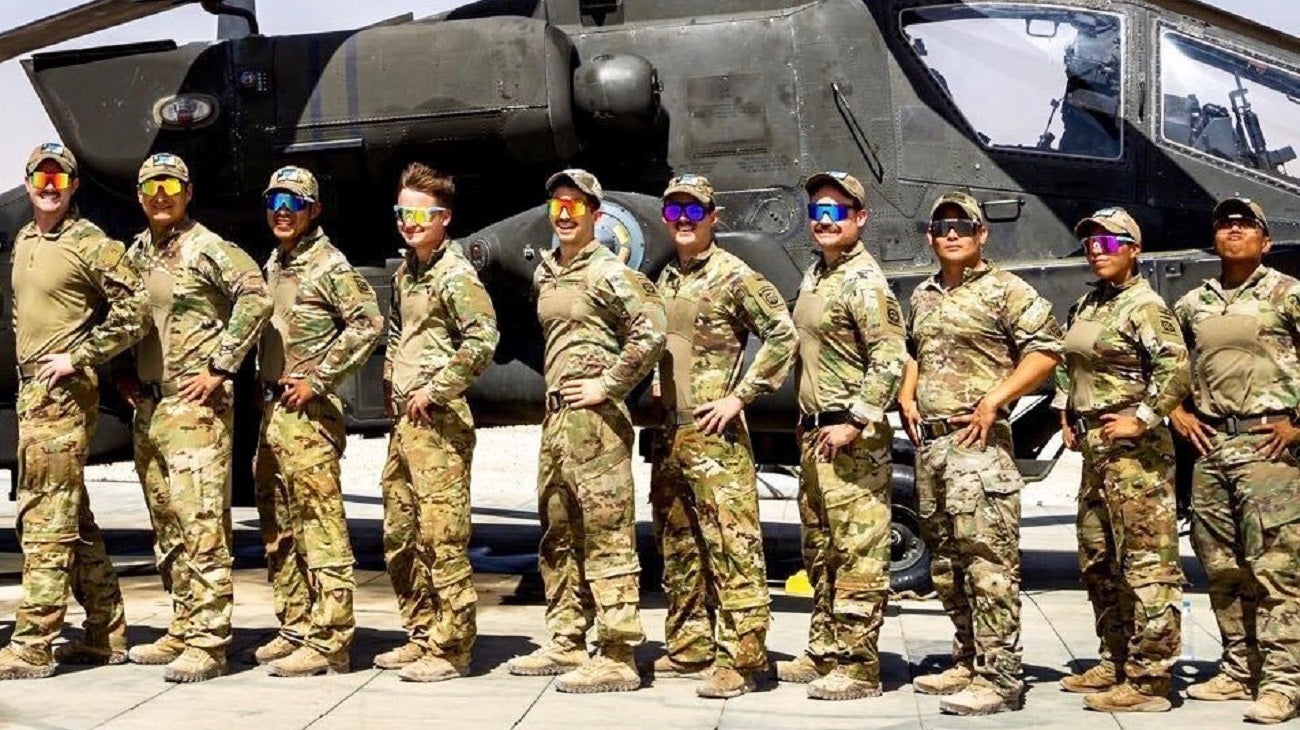 Pit Viper sunglasses fall into an interesting category of accessories that I like to call “memewear,” meaning stuff you wear to make a point. The entire purpose of Pit Vipers, at least from my experience, is to get people to ask why you have a rainbow-colored car windshield on your face, or if Macho Man Randy Savage wants his glasses back. In the military, the term for this is “belligerent.” Apparently, I have a reputation for belligerence, because roughly 50 people tagged me in the announcement posts on various social media platforms for the Pit Viper “BALL-ISTIC” line of military-themed eyewear.

The entire marketing strategy of Pit Viper is designed to be raunchy, provocative, and hilarious in every way possible. Featuring mulleted, scantily clad men, sometimes-mulleted scantily clad women, fully dressed men and women with mullets — lots of mullets — as well as dogs, babies, farm animals, and mannequins, all wearing what could be described as the douchiest glasses known to humanity. And they know it. With slogans like “the 69th most popular sunglasses brand, according to your mom” and “put your face between a pair,” they’re basically telling their customers “go fuck yourself, buy our product,” and it seems to have worked out hilariously well for them. This is particularly true among younger service members, the zoomer demographic that Pit Viper specifically targets.

There’s only one problem with Pit Viper’s glasses: They’re out of regs. Or so every staff noncommissioned officer with a raging high and tight would have you believe.

For the uninitiated reader, the military has rules to varying degrees, depending on the branch, regarding what kind of accessories you can wear in uniform. These guidelines are usually found in the same antifun documents where you learn how long your hair can be and how many comments you’ll get if your choice in wristwatch isn’t a black Casio G-Shock. One of the key sections is on eyewear, and it basically dictates that your choice in sunglasses must be of a generally military character, not have large or ostentatious logos, not have brightly colored or mirrored lenses, and not be “faddish or eccentric.” If that last phrase sounds vague, it’s because it is. However, the other three regulations are pretty clear, and effectively ban 99% of Pit Viper’s catalog. Not that it stopped anyone.

Thing is, we found out that these “belligerent” servicemembers were actually inadvertently following a nearly four-decades-old Army tradition by wearing these deliberately ugly sun-blocking eyesores. Rewind to the rad year of 1984, when the U.S. Army instituted a fittingly-futuristic requirement for eyewear that was protective against both ballistic and laser threats. They called this program “SPECS” or Special Protective Eyewear Cylindrical System, which is even more rad. Finally, in 1997, the first set of SPECS was put into production, and in a totally 90s move, the Army wanted to make it the host for a heads-up display unit. This thing even had an NSN (National Stock Number), meaning you can look it up and even still buy them if you know where to look. (NSN: 8465-01-416-4630.)

You don’t need 20/20 vision to realize that the Army’s SPECS and Pit Viper’s glasses share a striking resemblance. They’re basically identical, save for the branding and frame color.

So now with your barracks lawyer legal precedent in hand — after all, how can something that looks identical to a pair of officially sanctioned military shades be “faddish or eccentric” — let’s return to the present with the Pit Viper BALL-ISTIC line of products.

These modern successors to the SPECS now come in a variety of colors: there’s “Black Ops,” which are black, obviously, “Sandstorm,” which has a flat dark earth hue, and the olive drab green “NJP,” the latter of which is my favorite specifically because I can now match my 6105 watch with my NJP glasses. Naming a pair of belligerent sunglasses that are sure to attract the ire of anyone with a rocker on their rank after Article 15 of the UCMJ shows that Pit Viper knows their target audience, and is in keeping with their in-your-face branding. The styling is similarly obnoxious, with their website listing them at “5.66 inches wide in merika” and almost 2.35 screeching bald eagle AR-15 unprotected sex inches tall. They offer both ANSI z87 and MIL-PRF-32432 (GL) which basically means that if your M4 blows up in your face, your eyes won’t be shredded by flying aluminum.. All for the price of $130.

So then how do they compare to the SPECS? The SPECS offer 4 lens colors, clear, smoke, green, and gray, but only one frame color. They’re laser and ballistic resistant, and have no sort of logo on them. Also they’re called SPECS, which is really lame, and have no provision for prescription inserts, meaning you’ll have to wear glasses or contacts underneath. But they’re $25 if you can find them. On the contrary, you can spend $130, get your choice of three colors for the frame, have a radical logo design, not worry about lasers because you’re shooting the lasers yourself, they offer prescription inserts so that you can look sick as fuck and actually see stuff, and have them be called “BALL-ISTIC” which is way cooler. Plus either way, you’re honoring history, because looking like you’re an octogenarian straight out of pupil dilation is a military tradition, as we’ve learned.