“Everyone is well aware of the conditions of the barracks." 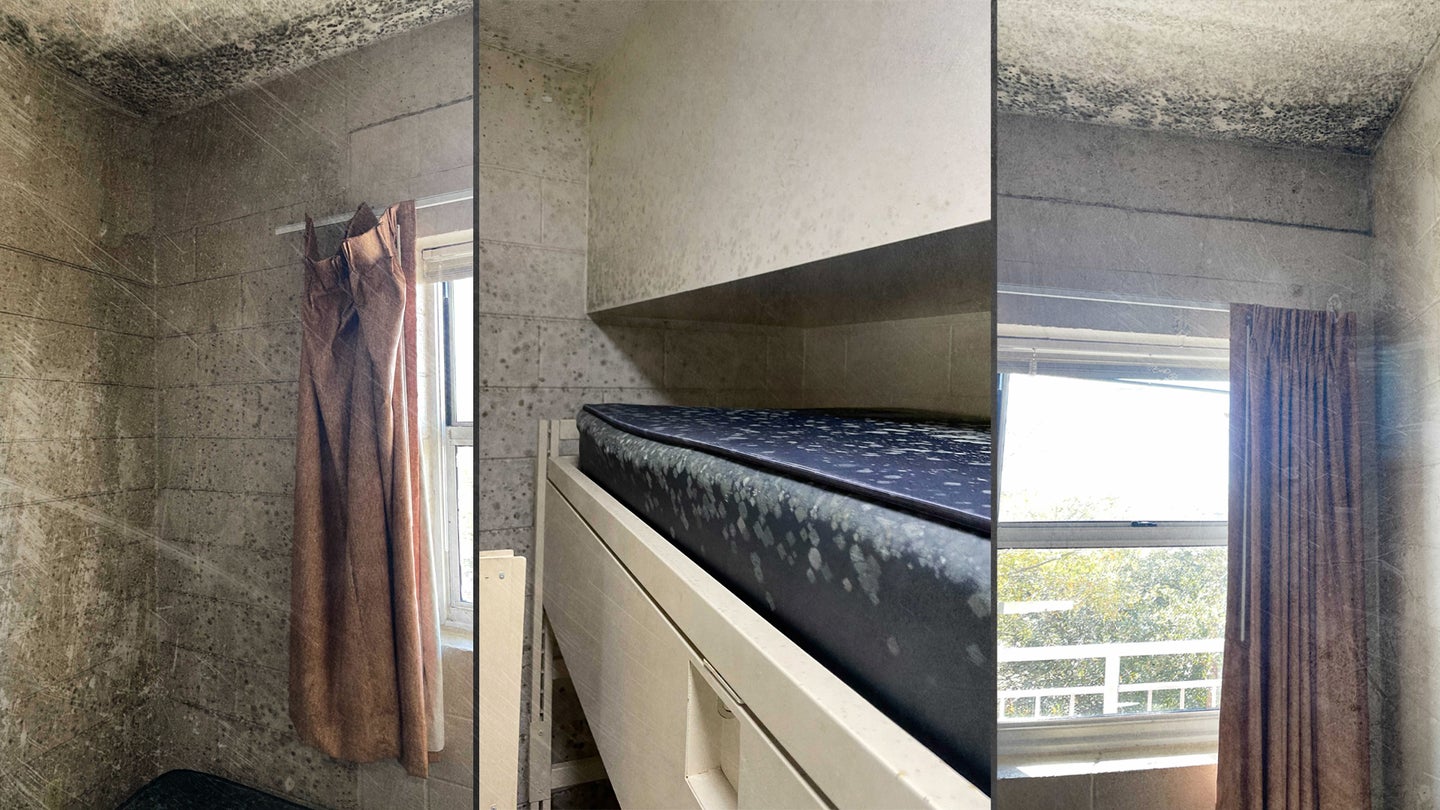 Hundreds of Marines are moving into a moldy barracks in North Carolina that has gone further downhill since being tepidly rated “degraded but adequate” during a building inspection in 2019.

According to one Marine who provided photo and video evidence, HP 225, the new home for a company of Marines assigned to 3rd Battalion, 6th Marine Regiment at Camp Lejeune has signs of poor maintenance, including cockroaches, rampant mold, and missing beds and furniture.

Indeed, a walkthrough of the three-story barracks on Nov. 2 revealed mold on the ceiling, walls, chairs, and mattresses in at least two rooms, despite the building having been deemed to have “no significant issues” in June. In reality, there are many.

“Everyone is well aware of the conditions of the barracks,” the Marine told Task & Purpose on condition of anonymity. “Lot of guys have brought it up, but the people they bring it up to just don’t listen.”

The Marine said that the poor state of the barracks was first raised with noncommissioned officers, then commanders, and then relayed to battalion health officials. The Marine said that the issue was even brought up directly to the battalion commander, Lt. Col. Ryan R. Gordinier, during a unit-wide formation sometime in August or September. Nonetheless, the Marines were ordered to move into the building earlier this week.

“If it was the other way around and they had to live in these barracks, they wouldn’t live in this shit,” the Marine said. “And if they wouldn’t, why are they making us?”

One of the worst rooms in the building is covered floor-to-ceiling in a mosaic of mold and has been marked off with duct tape. Though it is currently unoccupied, the Marine who spoke with Task & Purpose claimed his leaders tried to move someone in until a service member flat-out refused.

“He went into there and was like ‘fuck no, I’m not moving into this,’” the Marine said, further claiming that Corps officials were trying to minimize the extent of the problem.

“I have a bunch of friends, and they’re all saying their rooms have mold in it somewhere,” he said. “Every room has mold in it in some shape or form and they’ve all found cockroaches in them.”

When asked for comment, a Marine official claimed that “no Marine will be forced to live in unsanitary or unhealthy living conditions” and said that only one “specific room was identified as requiring abatement for mold [and] mildew.”

“As Marines are preparing to move, rooms are being re-inspected by leaders in their chain of command to identify whether they require further cleaning,” said 2nd Lt. Mark P. Grill, a Marine spokesman, leaving open the possibility that more unsanitary conditions may be found.

This isn’t the first time Marines have been required to live in barracks wracked with mold. Marines at Camp Hansen in Okinawa, Japan were forced to wage a losing war against mold in their barracks amid the Coronavirus pandemic last year, with photos showing moldy residue on the ceilings, the walls and around air vents. The same mold build-up around vents can be seen in photos and videos of 3/6’s barracks, causing Marines to wonder whether the mold in the worst-affected rooms will remain there, or if it will spread to other parts of the building.

Though most of the photos provided to Task & Purpose showed black mold, the Centers for Disease Control and Prevention cautions that “color is not an indication of how dangerous mold may be.” Still, the CDC notes that exposure to mold can lead to “a variety of health effects, or none at all,” and at least one study found “sufficient evidence” linking indoor mold exposure with upper respiratory tract symptoms in otherwise healthy people.